Electronics You Can Wrap Around Your Finger

A new multiferroric film keeps its electric and magnetic properties even when highly curved, paving the way for potential uses in wearable devices.

WASHINGTON, D.C., February 10, 2015 – Electronic devices have shrunk rapidly in the past decades, but most remain as stiff as the same sort of devices were in the 1950s -- a drawback if you want to wrap your phone around your wrist when you go for a jog or fold your computer to fit in a pocket. Researchers from South Korea have taken a new step toward more bendable devices by manufacturing a thin film that keeps its useful electric and magnetic properties even when highly curved. The researchers describe the film in a paper published in the journal Applied Physics Letters, from AIP Publishing. 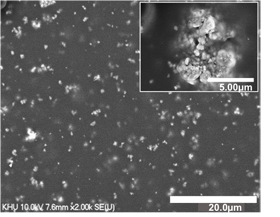 Flexible electronics have been hard to manufacture because many materials with useful electronic properties tend to be rigid. Researchers have addressed this problem by taking tiny bits of materials like silicon and embedding them in flexible plastics.

A team of physicists and engineers from South Korea took the same approach with bismuth ferrite (BiFeO3) -- one of the most promising materials whose electronic properties can be controlled by a magnetic field, and vice versa. Such materials are called multiferroics and attract interest for applications like energy efficient, instant-on computing.

The researchers synthesized nanoparticles of bismuth ferrite and mixed them into a polymer solution. The solution was dried in a series of steps at increasing temperatures to produce a thin, flexible film.

When the researchers tested the electric and magnetic properties of the film they found that their new material did much more than preserve the useful properties of bulk bismuth ferrite -- it actually made them better. And the improved properties remained even as the film was curved into a cylindrical shape.

"Bulk bismuth ferrite has crucial problems for some applications, such as a high leakage current which hinders the strong electric properties," said YoungPak Lee, a professor at Hanyang University in Seoul, South Korea. Mixing nanoparticles of bismuth ferrite into a polymer improved the current-leakage problem, he said, and also gave the film flexible, stretchable properties.

Flexible multiferrorics could enable new wearable devices such as health monitoring equipment or virtual reality attire, Lee said. The multiferroric materials could be used in high-density, energy efficient memory and switches in such devices, he said.

Before the new films make their debut in wearable tech, the researchers are working to further improve their multiferroic properties, as well as exploring even more flexible materials.