Open microwell setup for screening embryos may allows researchers to select the most viable ones before implantation, potentially increasing IVF success rates

From the Journal:
Biomicrofluidics
By Laurel Hamers

WASHINGTON, D.C., April 28, 2015--For couples struggling to conceive the old-fashioned way, in vitro fertilization (IVF) provides an alternate route to starting a family. When eggs are mixed with sperm in test tubes, the fertilized eggs to grow into embryos that can be implanted inside the uterus of a woman who will carry them to term.

IVF often works miracles for infertile couples, a fact for which its inventor won a Nobel Prize a few years ago. However, the procedure can be time-consuming, costly, and emotionally draining, often requiring multiple implantation cycles before a successful pregnancy. With the average cost of one cycle in the United States topping $12,000, according to the American Society for Reproductive Medicine, IVF is out of reach of many couples.

To make IVF more efficient, a team of researchers from National Tsing Hua University and the National Health Research Institutes in Taiwan has developed a technique to more effectively grow and screen embryos prior to implantation. Their results, published in the journal Biomicrofluidics, from AIP Publishing, could facilitate more targeted selection of embryos to implant, lead to higher IVF success rates, and ultimately and lower its cost.

"It will lower the stress level of patients greatly if the number of IVF cycles and embryos transferred can be reduced while maintaining a promising outcome," said Chihchen Chen, the lead researcher on the project. "We are interested in understanding the essential needs of a developing embryo and aiming to improve embryo culture."

Often, embryos in IVF are pooled together in small drops of fluid and then transferred into the uterus. Culturing the embryos in groups is efficient, but it also makes the implantation less selective: lab technicians can't easily assess the viability of an individual embryo in the microdrop.

The Taiwanese researchers instead developed a way to culture mouse embryos in a plate of open microwells, spreading them out over the plate so each well contains just one or two embryos. A layer of oil over the top prevents embryos from moving between microwells while still allowing a micropipette to penetrate into the system to eventually transfer the embryos to the uterus. The microwell system gives each embryo its own microenvironment, allowing researchers to determine on a case-by-case basis which ones are the most viable. 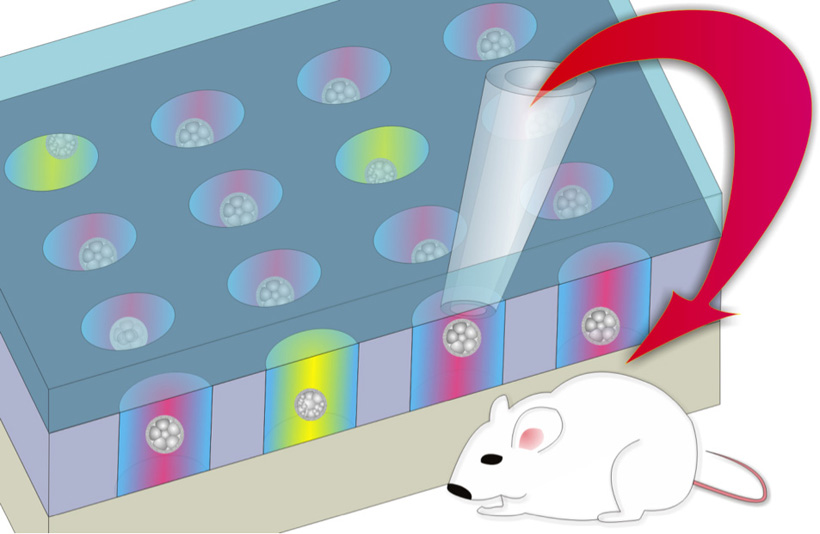 "Embryos are very sensitive to their environments. Understanding the microenvironment of embryos allows us to promote the growth and minimize the epigenetic manipulation of embryos," Chen said.

Chen and her colleagues used high-resolution time-lapse imaging to track the individual development of the mouse embryos. "Interestingly, embryos successfully develop into blastocysts even when they are cultured in very tiny microwells," Chen said.

Furthermore, the length of time that embryos took to reach the 4-cell and 8-cell stages accurately predicted their likelihood of later developing into blastocysts, providing a simple way to screen and select the most promising early-stage embryos for implantation. A more targeted approach to implantation would reduce the number of eggs needed for the procedure, cutting both costs and time.

While these initial experiments were conducted on mouse embryos, Chen are her colleagues are hopeful that their work will someday have clinical relevance for humans. "After the experimental conditions have been optimized for human embryos and put through clinical validations, the techniques could be applied to IVF in humans," Chen said.