Predicting the Extent of Flash Flooding

Devastating flooding, such as Iowa's flood of 2008, motivated a team of researchers to analyze a hydrologic model with the potential to predict the extent of flooding based on predicted rain patterns

From the Journal
Chaos
By AIP News Staff

WASHINGTON, D.C., March 10, 2015 -- Devastating floodwaters such as those experienced during Iowa's Flood of 2008 -- which swamped many Iowa communities, along with ten square miles of Cedar Rapids -- are notoriously difficult to predict.

So a team of University of Iowa mathematicians and hydrologists collaborating with the Iowa Flood Center set out to gain a better understanding of flood genesis and the factors impacting it. They were able to do this by zeroing in on the impacts of certain rainfall patterns at the smallest unit of a river basin: the hillslope scale.

This week in the journal Chaos, from AIP Publishing, the team describes how they analyzed the nonlinear dynamics of a recently proposed hydrological model at the hillslope-scale under fluctuating precipitation. The study appears as one of a special collection of related articles in the March issue of the journal, which is focused on "Nonlinear Dynamics for Planet Earth." See http://scitation.aip.org/content/aip/journal/chaos/25/3/section. 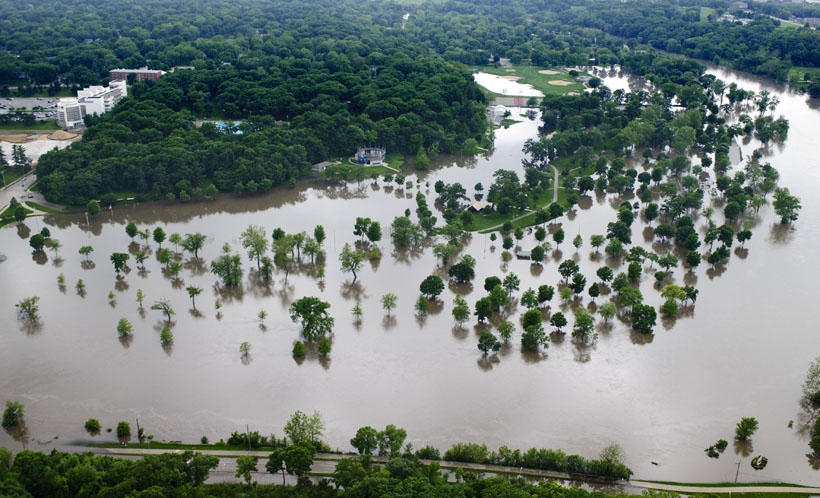 The proposed hydrological model that is the subject of the new study "describes a mass balance among volumes of water at the hillslope scale," said Rodica Curtu, an associate professor in the Department of Mathematics at the University of Iowa, working on the project with Morgan Fonley, a graduate student. "Some of these volumes are easily observed, such as ponded water and streamflow, while others such as water in unsaturated areas and saturated zones of soil are more difficult to observe."

When this model is brought to equilibrium, it exhibits a natural tendency to amplify some oscillations but dampen others. "The deciding factor about this behavior is the frequency at which the oscillations are applied to the model via precipitation patterns," she pointed out.

If the hillslope system "experiences a certain frequency of rainfall, the soil becomes the least likely to take in water -- and instead puts it all in the nearest river so the streamflow exhibits large spikes of water," Curtu said. The mathematics involved tap into methods from the theory of nonlinear dynamical systems.

The key significance of this work?  Mechanistic description and mathematical investigation of physical processes "can be more enlightening than model calibration, when studying nonlinear phenomena," Curtu said. This is because, she explained, mechanistic, physics-based equations “may not only simulate processes under investigation, but also uncover some of their underlying properties."

"In this case, by using physical parameters to describe a realistic hillslope, we found a pattern of precipitation that yields the greatest -- most amplified -- runoff coefficient, which determines the manner and how fast water will reach the river link."

Since this is a framework for soil models, Curtu and colleagues offer further improvements to the soil model to create a more accurate representation of water in the soil. "Using this framework, we can potentially find other factors that impact the extent of flooding both at the small hillslope scale and at the larger river catchment scale," she added. "Our work will continue in this direction with our Iowa Flood Center collaborators -- Witold Krajewski, Ricardo Mantilla and Scott Small."