In the Future, Combining Lasers Could Shrink Particle Accelerators from Kilometers to Meters

From the Journal
Physics of Plasmas
By AIP News Staff

WASHINGTON D.C., May 27, 2014 -- It took every inch of the Large Hadron Collider's 17-mile length to accelerate particles to energies high enough to discover the Higgs boson. Now, imagine an accelerator that could do the same thing in, say, the length of a football field. Or less.

That is the promise of laser-plasma accelerators, which use lasers instead of high-power radio-frequency waves to energize electrons in very short distances. Scientists have grappled with building these devices for two decades, and a new theoretical study predicts that this may be easier than previously thought.

If their models prove correct, they could help lower the cost of high-energy physics research -- the Large Hadron Collider cost $9 billion -- as well as many other industrial and medical applications of accelerators.

Laser-plasma accelerators work by blasting a powerful laser beam into a plasma, a cloud of unattached electrons and ions.

"The effect is like the wake of boat speeding down a lake. If the wake was big enough, a surfer could ride it," Leemans, who heads the BELLA Center, explained.

"Imagine that the plasma is the lake and the laser is the motorboat. When the laser plows through the plasma, the pressure created by its photons pushes the electrons out of the way. They wind up surfing the wake, or wakefield, created by the laser as it moves down the accelerator," he said.

The fast moving electrons leave the heavy ions behind. As they separate, they create gigantic electric fields, 100 to 1,000 times larger than those in conventional accelerators.

This is how they accelerate electrons so rapidly. For example, Stanford's Linear Accelerator Center takes two miles to drive an electron to 50 billion electron volts (GeV). Leemans’ experimental laser-plasma accelerator takes electrons to more than 1 GeV in slightly more than 1 inch.

It takes a lot of laser power to generate a wakefield. For example, BELLA's petawatt (1 quadrillion watts) laser has a 10 meter x 10 meter footprint. It generates 400 times more power than all the world's power plants combined, though only for 40 femtoseconds (40 quadrillionths of a second).

Unfortunately, it takes BELLA's laser a full second to recharge and send a second pulse.  High-energy physics research requires tens of thousands of pulses per second. Many other applications would benefit from multiple pulses per second. 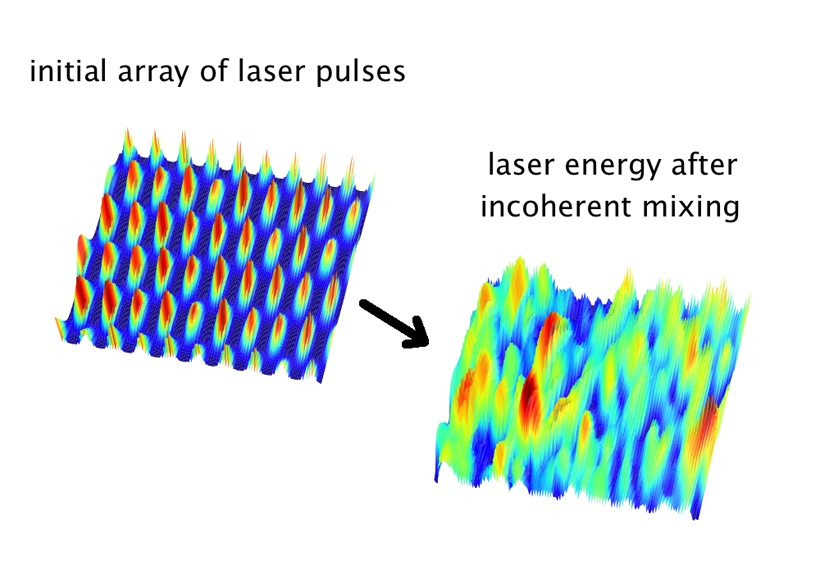 BELLA's laser has the highest repetition rate of any petawatt laser in the world. Building a faster petawatt laser would require a heroic feat of engineering.

Several European researchers have suggested using an array of smaller lasers to produce one enormous pulse. Since less powerful lasers recharge faster, they could produce hundreds or even thousands of pulses per second and sustain a wakefield over many meters.

The hurdle they needed to overcome was how to synchronize hundreds of lasers so they all pulsed within less than a femtosecond of one another.

Such precision would be expensive and presents serious technical problems. But the concept of combining lasers got Leemans' team thinking.

What if the beam was not perfect? What if it were just good enough to rapidly raise the photon pressure on the electrons? Could we get away with it, they wondered.

According to the model presented in Physics of Plasmas, they could. Leemans compares it to pushing a swing.

"Instead of one big push, we would give it many smaller pushes at roughly the same time. It's not quite perfect, but the swing doesn't really care. It averages over all these little pushes and up it goes."

Laxer timing would make larger and more sustainable accelerators practical. Leemans hopes to power them with a new technology based on highly-efficient fiber lasers. The power that off-the-shelf welding lasers offer demonstrates multi-kW capabilities but much work is needed to pack the power into ultrashort pulses needed for laser plasma accelerators. The paper offers an approach that gets us a step closer.

The new accelerators would offer new options to physicists trying to unravel how the universe is put together. It could lower the cost of industrial uses, and make high-energy accelerators more affordable for hospitals.

Just think of it as dreaming big by thinking small.

Physics of Plasmas is devoted to the publication of original experimental and theoretical work in plasma physics, from basic plasma phenomena to astrophysical and dusty plasmas.