From the Journal:
Journal of Applied Physics
By AIP News Staff

In elastocaloric materials a change in mechanical stress can create a change in temperature.

In the Journal of Applied Physics, from AIP Publishing, a team of researchers from Technical University of Denmark report that the elastocaloric effect opens the door to alternative forms of solid-state refrigeration that are direct replacements for vapor compression technology.

The elastocaloric effect is one of many flavors of "caloric effects," a phenomenon in which a sudden change of an external field can alter thermodynamic properties of a solid material such as temperature or entropy, a measure of the material's disorder.

The Danish team specializes in caloric effects and is always on the lookout for new ways to build more efficient coolers. So, after years of working with magnetocaloric refrigeration system modeling and design, which involves applying a change in magnetic field to materials, they decided to also explore the potential of elastocaloric cooling.

What inspired the team’s shift to elastocaloric cooling? “The large amount of latent heat released during the elastocaloric effect, as well as its potentially high power densities that can be significantly higher compared to the magnetocaloric effect,” says Jaka Tušek, lead author and a postdoctoral researcher at the Technical University of Denmark.

In terms of basic underlying concepts, the elastocaloric effect is associated with the “martensitic phase transformation,” which is a first-order diffusionless structural transformation from austenite to martensite phase that can be induced by reducing the temperature or by applying an external stress. This is responsible for the temperature-induced “shape memory effect” and stress-induced “superelasticity.”

So, how exactly does the elastocaloric cooling cycle work? “When an elastocaloric (superelastic) material in the austenitic phase is axially stressed, an exothermic austenitic-martensitic transformation occurs,” Tušek explained. “If this happens fast enough, the material heats up. It then expels heat to its surroundings and cools down to the ambient temperature.” After the stress is removed, the crystal structure reverts back to its austenitic phase, which causes the material to cool down and further absorb heat from its surroundings. 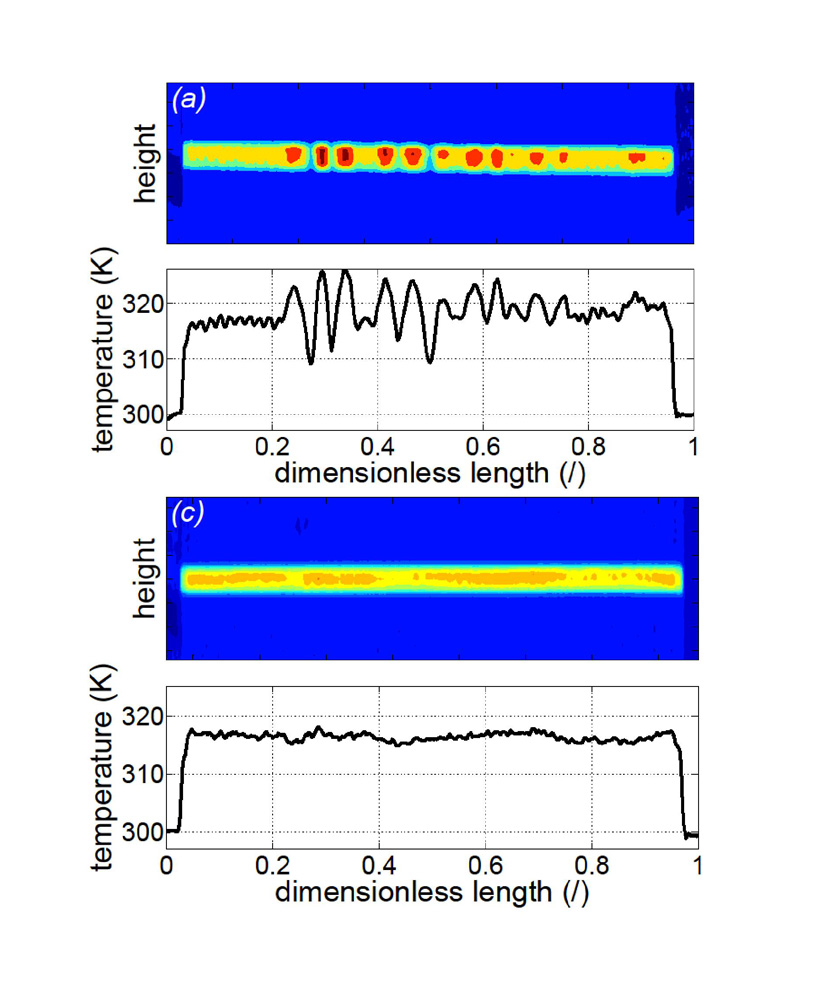 The team’s work is the first demonstration that shows elastocaloric materials such as a nickel-titanium (Ni-Ti) alloy can be cyclically loaded and unloaded with a reproducible elastocaloric effect over a wide temperature range.

“This is an important step toward the use of elastocaloric materials in cooling devices such as household refrigerators and air conditioners, or even heat pumps, for which the required temperature between the heat source and its heat sink is approximately 30 Kelvin or more,” Tušek explained.

Tušek and colleagues also stabilized the Ni-Ti alloy to ensure a reproducible effect, which is crucial for practical applications, and created a uniform elastocaloric effect for the alloy.

While heat pumps, air conditioners and refrigerators are most likely to benefit from elastocaloric technology, “elastocaloric cooling can be viewed as a direct substitute for vapor compression technology -- one that’s more efficient and environmentally friendlier -- to be used in a wide range of applications,” Tušek pointed out. The technology also is gravity independent and potentially highly reliable, so it may find use in the thermal management of space systems as well.

The next big step is “to build the first prototype to demonstrate the technology’s potential,” said Tušek. “Afterward, we hope to build more complex, high-performance machines that can compete with commercial technologies.”

The team’s future work will focus on ways to load the material to increase its resistance to fatigue, which is considered to be the technology’s main limitation.