Triplet Threat from the Sun

From the Journal
Journal of Chemical Physics
By Laurel Hamers

WASHINGTON D.C. Oct. 21, 2014 -- The most obvious effects of too much sun exposure are cosmetic, like wrinkled and rough skin. Some damage, however, goes deeper—ultraviolet light can damage DNA and cause proteins in the body to break down into smaller, sometimes harmful pieces that may also damage DNA, increasing the risk of skin cancer and cataracts. Understanding the specific pathways by which this degradation occurs is an important step in developing protective mechanisms against it.

Researchers from the École Polytechnique Fédérale de Lausanne (EPFL) in Switzerland have shown that certain peptides (small proteins) degrade under UV light by first passing through a triplet quantum state, a reactive arrangement that can cause greater damage than fragmentation alone.

Their results, described in a paper appearing this week in The Journal of Chemical Physics, from AIP Publishing, explore this pathway of protein degradation and could facilitate the development of better UV protection mechanisms.

The researchers took gas-phase peptides containing tyrosine or phenylalanine, light-absorbing amino acids found throughout our bodies, and subjected them to ultraviolet laser radiation. Then, they used ultraviolet-infrared spectroscopy to examine the resulting structural changes over time. They found that instead of immediately degrading once excited, some of the molecules formed intermediate triplet states. 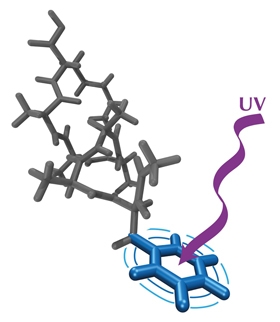 Normally, electron spins are paired—if two electrons are present, one spin points one direction and the other points the opposite direction. But under certain conditions, the spin of one of the electrons can flip so that they both point in the same direction. This arrangement is known as a triplet state.

Because electronic configurations can affect how a molecule will react, knowing that it passes through a triplet state can provide additional insight into the potential consequences of photodamage for these molecules.

“Triplet states are long-lived and can be involved in harmful chemical reactions,” said chemical physicist Aleksandra Zabuga, an author of the new paper. “Long-lived” is relative—they still only last from microseconds to milliseconds—but it does give them a greater opportunity to do damage.

“During that time the triplet species may transfer their energy to nearby oxygen and produce highly reactive singlet oxygen or other free radicals. These radicals can in turn move around the cell and cause DNA damage that is much more dangerous than the fragmentation of peptides,” she said.

A number of other research groups have studied UV fragmentation in solution and also report the presence of triplet states. Peptides are less likely to fragment in this environment, however, because they can interact with the surrounding molecules and deactivate through alternative mechanisms, mediating the damage. In addition, pigments like melanin in our skin and kynurenine in our eyes reduce the amount of UV radiation that reaches cells.

“It is interesting to consider the fact that all of these protection mechanisms are external to the peptide. In other words, peptides do not seem to have very efficient means of protecting themselves,” said Zabuga.

In the future, the researchers hope to examine the impact of the local environment on light-induced fragmentation. For instance, it is possible that nearby water molecules or additional amino acids on the same peptide chain could interact with the triplet state and alter the fragmentation mechanism—an important consideration in real-world systems.