Chinese scientists have developed an ultra-thin, tunable microwave absorber that can operate over a broad range of frequencies, demonstrating its potential in improving aircraft cloaking, warship stealth and broadband antenna

From the Journal
Journal of Applied Physics
By Zhengzheng Zhang

Washington, D.C., Nov. 10, 2015 – Microwave absorbers are a kind of material that can effectively absorb incident microwave energy to make objects invisible to radar; therefore they are commonly used in aircraft cloaking and warship stealth. Recently, as radar detection devices have been improved to detect the near-meter microwave length regime, scientists are working on high-performance absorbers that can cloak objects in the equivalent ultra-high frequency regime (from 300 megahertz to two gigahertz). However, conventional absorbers for the ultra-high regime are usually thick, heavy or have narrow absorption bandwidth, making them unsuitable for stealth missions.

To solve this problem, a team of researchers from Huazhong University of Science and Technology in China has developed an ultra-thin, tunable broadband microwave absorber for ultra-high frequency applications. This ultra-thin absorbing surface, called an active frequency-selective surface absorber, consists of arrays of patterned conductors loaded with two common types of circuit elements known as resistors and varactors. The unit patterned cell absorbs microwaves and can also be actively controlled by stretching to expand the tunable bandwidth. In a paper published this week in the Journal of Applied Physics, from AIP Publishing, the researchers presented this work.

“Our proposed absorber was fabricated with a stretching transformation pattern, which is both thin and can absorb a wide range of frequencies for near-meter microwave application,” said Wenhua Xu, the primary researcher in the team led by Jianjun Jiang, a professor of School of Optical and Electronic Information at the Huazhong University of Science and Technology, China. “Its absorption range covers a broad band from 0.7 to 1.9 gigahertz below -10 decibel, and the total thickness of the absorber is only 7.8 millimeters, which is one of the thinnest microwave absorbers reported.”

“Usually the thickness of conventional radar absorbers is a quarter the wavelength of the incident microwave. In the high frequency regime, take one gigahertz as an example, the thickness of the absorber would be around 7.5 centimeters, which is too thick and heavy to be used in aircrafts or warships. Our proposed absorber is almost ten times thinner than conventional ones,” Xu said.

Other alternative absorbers, such as metamaterial absorbers made from a resonant metallic structure printed on a dielectric substrate, though significantly thinner than the wavelengths absorbed, have a narrow working bandwidth.

To develop a novel absorber that is both thin and with broadband performance, Jiang’s team employed a type of thin, light periodic structure called a frequency-selective surface, which consists of an assembly of patterned conductors arranged in a two-dimensional array, usually backed by a thin dielectric, to reflect incident microwaves according to their frequency.

In the experiment, Jiang’s team fabricated a broadband active frequency-selective surface with a stretching transformation pattern on a printed circuit board, and soldered the resistors and varactors between each of the two unit patterned cells. The fact that the surface could be stretched meant that the parameters of the unit patterned cell can be actively controlled by stretching. 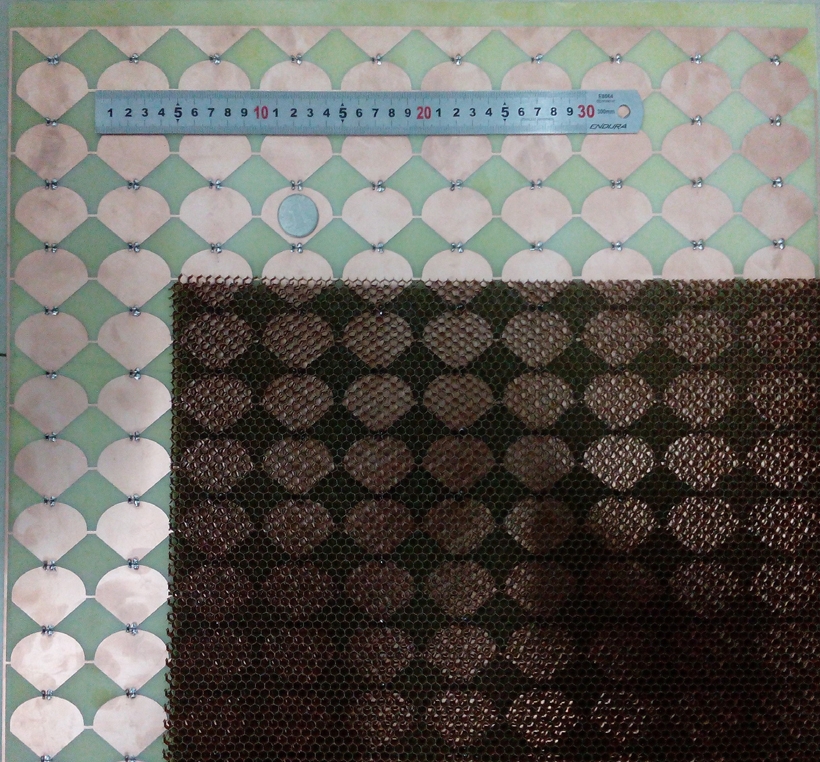 By modeling the absorber using a transmission line, the researchers found that the varactor provides a variable capacitance at varying bias voltage, which produces the device’s tunability, while the lumped resistor with constant resistance reliably produces strong absorption at the resonance frequency. Besides the lumped impedances of the loaded elements, the researchers discovered that the parameters of the unit patterned cells contribute to the device’s absorption performance as well.

“We applied various stretching transformation coefficients to the unit cell pattern to obtain the available parameters to expand the tunable bandwidth,” Xu said. “Our results suggest that a cell pattern with a smaller stretching transformation coefficients ratio (i.e. width to length ratio of the unit cell) leads to higher resonance frequency absorption and produces a wider tunable bandwidth as well.”

Xu noted that it is the first time that stretching transformation pattern is used in the active frequency-selective surface absorber to expand the bandwidth, which turns out to be an effective technique for producing broadband tunability.

“At frequencies below two gigahertz, conventional microwaves absorbers are limited in application by their thickness and narrow absorption bandwidth. Our proposed absorber has achieved broadband tunability and ultra-thin film simultaneously,” Xu said. “The total thickness of 7.8 millimeters is around one twenty-ninth wavelength of the central frequency of incident microwaves, and the ultra-thin absorber with broad bandwidth may be widely used in warship stealth, airplane cloaking and tunable, broadband antennae.”

The researchers’ next step is to study the polarization and the oblique incidence performance for the proposed active frequency-selective surface absorber.