Discovery of “stable energetic embedding” of atoms and molecules within ice by University of Chicago and Loyola University researchers has wide-ranging environmental, scientific and defense implications

From the Journal
Journal of Chemical Physics
By AIP News Staff

WASHINGTON D.C., Sept. 30, 2014 – Ice is ubiquitous in nature—found within terrestrial and astrophysical environments alike—and contains many atoms and molecules trapped inside it. For example, ice beneath the world’s oceans hosts a vast reservoir of greenhouse gases, which if released would have a profound effect on climate change.

On the earth’s surface, seasonal ice and permafrost-covered regions represent a vast reservoir for the collection, concentration and release of environmental and trace gases—encompassing national security concerns about the persistence and fate of intentionally released dangerous chemical species.

This makes expanding our knowledge of the way molecules interact with ice surfaces a key goal not only for climate change but also a much wider range of other environmental, scientific and defense-related issues.

Now, a team of University of Chicago and Loyola University researchers has discovered a new mechanism they call “stable energetic embedding” of atoms and molecules within ice. The work is described in The Journal of Chemical Physics, from AIP Publishing. It appears in a Special Topic Issue on Interfacial and Confined Water. (See: http://scitation.aip.org/content/aip/journal/jcp/141/18/section)

The newly discovered mechanism explains how some molecules—such as CF4, or "carbon tetrafluoride"—interact with and become embedded beneath ice surfaces. The new work also showed how molecules embedded into ice through this mechanism can be trapped and remain within the ice at temperatures well above the typical desorption temperature for surface-adsorbed species.

“The discovery of stable energetic embedding of atoms and molecules within ice was a very exciting moment in our laboratory,” said Steven J. Sibener, the Carl William Eisendrath Distinguished Service Professor in the Department of Chemistry and The James Franck Institute, as well as director of the University of Chicago’s Institute for Molecular Engineering Water Research Initiative. “We also clarified the depth of gas penetration into ice by showing that molecules remain in the subsurface region rather than diffusing freely throughout the ice at the temperatures examined.” 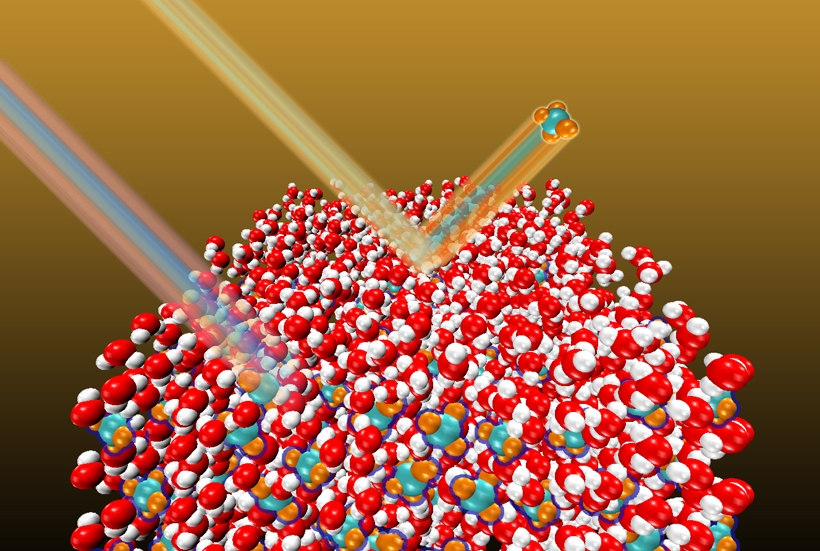 How exactly do you go about exploring stable embedding within ice? For starters, the team grows high purity ice films on a cryogenic substrate located within an ultrahigh vacuum environment. This allows them to precisely control film formation by varying the rate of water deposition at a variety of substrate temperatures.

“We grow two forms of ice: crystalline and amorphous solid water,” explained Sibener. “Amorphous ice can be induced to transform into its crystalline phase by raising the temperature to about 160 K. Once prepared, the ice surface is exposed to an energetic beam of atoms or molecules entrained in a supersonic beam.”

Supersonic beam methods can then be used to create a stream of essentially monoenergetic species that collide with the surface in a specified geometry. “Unusually well-defined collision kinematics allow us to probe and theoretically model how molecules become incorporated into the ice film, as well as to understand sticking probabilities and energy transfer by measuring the velocity and angular distributions of the reflected species,” he said. “We detect embedded molecules in two ways: post-dosing thermal desorption and highly sensitive in situ glancing angle infrared spectroscopy.”

The team’s work has significant implications for collisional energy and momentum transfer—in that molecules have another dynamical option in addition to the classic channels of scattering and rebounding directly or transiently residing on the surface until sufficient energy is transferred, leading to thermal accommodation. “Such refined knowledge is of both fundamental and technical importance, for example, as understanding the flight characteristics of high-performance aircraft,” Sibener said.

“Our work shows that such systems are far from static and that energetic embedding must be taken into account to develop more complete models of ice accretion and composition in space environments,” he added.

Next, Sibener and colleagues plan to explore related experiments with a focus on environmentally important gases and chemically reactive systems.