Wind Energy: On the grid, Off the Checkerboard

From the Journal:
Journal of Renewable and Sustainable Energy
By AIP News Staff

WASHINGTON D.C., April 1, 2014 -- As wind farms grow in importance across the globe as sources of clean, renewable energy, one key consideration in their construction is their physical design -- spacing and orienting individual turbines to maximize their efficiency and minimize any "wake effects," where the swooping blades of one reduces the energy in the wind available for the following turbine.

Optimally spacing turbines allows them to capture more wind, produce more power and increase revenue for the farm. Knowing this, designers in the industry typically apply simple computer models to help determine the best arrangements of the turbines. This works well for small wind farms but becomes less precise for larger wind-farms where the wakes interact with one another and the overall effect is harder to predict.

Now a team of researchers at Johns Hopkins University (JHU) has developed a new way to study wake effects that takes into account the airflow both within and around a wind farm and challenges the conventional belief that turbines arrayed in checker board patterns produce the highest power output. Their study provides insight into factors that determine the most favorable positioning -- work described in a new paper in the Journal of Renewable and Sustainable Energy, which is produced by AIP Publishing.

This insight is important for wind project designers in the future to configure turbine farms for increased power output -- especially in places with strong prevailing winds.

"It's important to consider these configurations in test cases," said Richard Stevens, who conducted the research with Charles Meneveau and Dennice Gayme at JHU. "If turbines are built in a non-optimal arrangement, the amount of electricity produced would be less and so would the revenue of the wind farm." 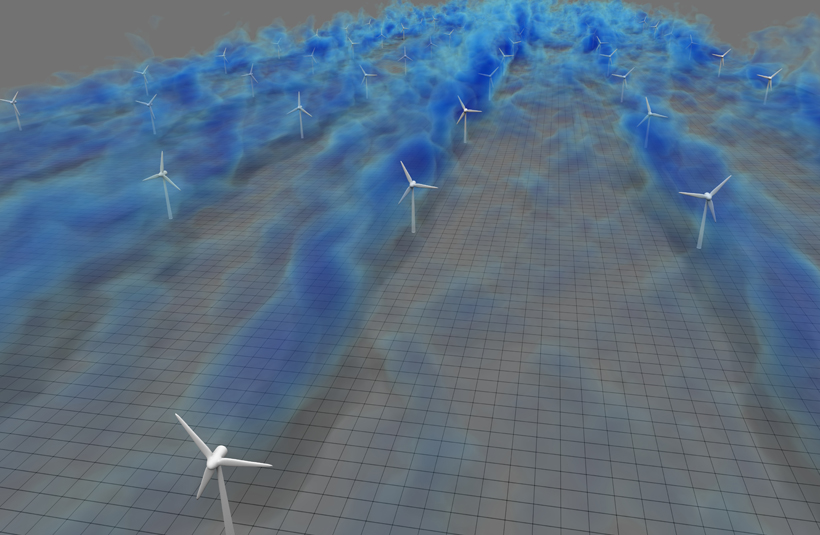 How Wind Farms are Currently Designed

Many considerations go into the design of a wind farm. The most ideal turbine arrangement will differ depending on location. The specific topology of the landscape, whether hilly or flat, and the yearlong weather patterns at that site both dictate the specific designs. Political and social considerations may also factor in the choice of sites.

Common test cases to study wind-farm behavior are wind farms in which turbines are either installed in rows, which will be aligned against the prevailing winds, or in staggered, checkerboard-style blocks where each row of turbines is spaced to peek out between the gaps in the previous row.

Staggered farms are generally preferred because they harvest more energy in a smaller footprint, but what Stevens and his colleagues showed is that the checkerboard style can be improved in some cases.

Specifically, they found that better power output may be obtained through an "intermediate" staggering, where each row is imperfectly offset -- like a checkerboard that has slipped slightly out of whack.

This work was funded by the National Science Foundation (grant #CBET 1133800 and #OISE 1243482) and by a “Fellowship for Young Energy Scientists” awarded by the Foundation for Fundamental Research on Matter in the Netherlands. The work used XSEDE (NSF) and SURFsara (Netherlands) computer resources.

Journal of Renewable and Sustainable Energy

Journal of Renewable and Sustainable Energy is an interdisciplinary, peer-reviewed journal covering all areas of renewable and sustainable energy that apply to the physical science and engineering communities.