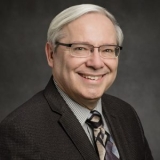 Interview with Dale Van Harlingen, Professor of Physics at the University of Illinois, Urbana-Champaign. He recounts his childhood in Ohio and his undergraduate education at OSU in physics and his early work on SQUIDS. Van Harlingen discusses his mentor Jim Garland, and he explains his decision to stay at OSU for graduate school to develop SQUID devices to make phase-sensitive measurements. He explains the opportunities that gained him a postdoctoral appointment at the Cavendish Laboratory in Cambridge where he developed his expertise in the Josephson Effect, and where he met John Clarke, who offered him a subsequent postdoctoral position at UC Berkeley. Van Harlingen describes his foray using SQUIDS to push the quantum limit, and he explains his decision to join the faculty at Illinois, where he was impressed both with the quality of the research and how nice everyone was. He describes joining the Materials Research Laboratory and the development of the Micro and Nanotechnology Laboratory, and he conveys his admiration for Tony Leggett. Van Harlingen discusses his research in NMR microscopy, grain boundary junctions, scanning tunneling microscopy, vortex configurations, and he describes his current interest in unconventional superconductors. At the end of the interview, Van Harlingen conveys his excitement about the national quantum initiative as a major collaboration between universities and National Labs, and he explains his motivation to understand if Majorana fermions actually exist.

Interview with John Martinis, professor of physics at UC Santa Barbara. Martinis gave the interview from Australia, where he was consulting for Silicon Computing following his affiliation with Google’s efforts to build a quantum computer. He surveys the current state of play toward that goal, and explains what applications quantum computing can serve, and how the field is clarifying the technological requirements to achieve a quantum computer. Martinis recounts his childhood in Los Angeles, his early interests in computers, and his undergraduate experience at Berkeley where he gravitated toward experimental physics. He describes his interactions with John Clarke and his motivations to stay at Berkeley for graduate school, where he focused on SQUIDS and was captivated by Tony Leggett’s ideas on quantum tunneling. Martinis explains his interest in working with Michel Devoret at Saclay for his postdoctoral research, where there was much excitement over high Tc and YBCO materials. He describes his subsequent work at NIST and his decision to join the faculty at Santa Barbara around the time he became focused on quantum computing. Martinis narrates the technological challenges of building qubits and error correction, and he explains how he got involved with Google and joined his style with its research culture. He describes his role as chief scientist in the collaboration and why his vision and Google’s diverged. Martinis addresses the issue of “hype” in quantum computing. At the end of the interview, Martinis emphasizes the centrality of systems engineering to his research agenda, and he explains why quantum supremacy will demonstrate the need for quantum computing and the limitations of classical computing.

This is an interview with David Weitz, professor of physics and applied physics at Harvard. Weitz recounts his childhood in Ottowa, his decision to pursue an undergraduate education in Waterloo, and a formative summer experience at the Weizmann Institute which convinced him to become a scientist. He describes his graduate work at Harvard, where he worked in Mike Tinkham’s group and where he developed his thesis research on the Josephson effect. He discusses his postgraduate work at the laboratory at Exxon where he developed research on de Gennes soft matter physics. Weitz explains his decision to join the faculty at Penn at a time when the basic science culture at Exxon was coming to a close, and Harvard’s successful effort to recruit him shortly thereafter. He discusses his work as director of the Harvard Materials Research, Science and Engineering Center, how he became interested in biophysics and biomedical engineering and how he pursued entrepreneurial and culinary interests from a soft matter perspective. At the end of the interview, Weitz describes his current motivations in using soft matter physics to advance human health and improve fracking as a key part of the American energy system.