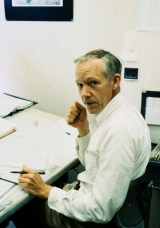 Interview with Gordon Bowden, Staff Engineer for over fifty years at SLAC. Bowden recounts his childhood in California, Oregon and New Jersey as his father moved around for work, and he explains his interest in physics and his undergraduate experience at the University of Virginia. Bowden discusses his subsequent work at a small electronics company doing research on X-ray diffraction and building equipment for the Space Radiation Effects Laboratory. He describes his subsequent work at Boeing on fluidic development, and he explains his motivations to focus on National Laboratories for his next opportunity. Bowden discusses his initial work in the hydrogen bubble chamber operations group at SLAC and he describes Dick Taylor’s leadership of Group A. He surveys his contributions to DELCO and PEP 1 and explains why SLC was so significant and how the klystron group fit within the overall Lab structure. Bowden explains how LCLS was an outgrowth of SLC and how SLAC became involved in the LSST camera collaboration. He discusses the function of the Technology Innovation Directorate, and he describes his recent work on X-ray cancer therapy. At the end of the interview, Bowden reflects on how SLAC has shifted from its early reliance on visualization in its detectors, which has changed completely as a result of computer analysis.