Interview with Herman B. White, physicist at Fermi National Accelerator Laboratory. White recounts his childhood in Tuskegee, Alabama and growing up during segregation. He discusses his early interests in science and his decision to enroll at Earlham College in Indiana as an undergraduate. White then describes his time at Michigan State University as a graduate student, during which he also held a position as a resident research associate at Argonne National Laboratory. Dr. White talks about his transition from nuclear physics to particle physics upon completing his master’s degree at MSU. He discusses the events that led him to accept a position at Fermilab rather than immediately pursue a PhD. White was the first African-American scientist appointed at Fermilab, and he recounts his early years there being mentored by Raymond Stefanski. He then describes his research fellowship at Yale and his non-traditional path to getting a PhD in 1991 from Florida State University. White talks about returning to Fermilab to work on kaon physics, and his eventual involvement in the Tevatron experiment. Toward the end of the interview, White reflects on the changes and trends he has seen in the research being done at Fermilab over the years, as well as his involvement in the National Society of Black Physicists. 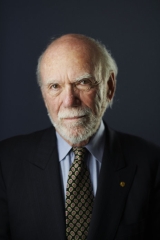 Interview with Barry Barish, Linde Professor of Physics Emeritus at Caltech, where he retains a collaboration with LIGO, and Distinguished Professor of Physics at UC Riverside. Barish recounts his childhood in Los Angeles and emphasizes that sports were more important than academics to him growing up. He explains his decision to attend Berkeley as an undergraduate, where his initial major was engineering before he realized that he really loved physics, and where he was advised by Owen Chamberlain. Barish describes the fundamental work being done at the Radiation Lab and how he learned to work the cyclotron. He explains why Fermi became his life-long hero and why he decided to stay at Berkeley for graduate school, even though the school’s general policy required students to pursue their doctoral work elsewhere. Barish describes his graduate research under the direction of Carl Hemholz, and he explains how he developed a relationship with Richard Feynman which led to his postdoc and ultimately, his faculty appointment at Caltech. He discusses how his interest in neutrinos led to his work at Fermilab and why the big question at the time was how to discover the W boson. Barish describes his key interests in magnetic monopoles and neutrino oscillations, and he describes his involvement with the SSC project through a connection with Maury Tigner at Berkeley, which developed over the course of his collaborations with Sam Ting. He explains that his subsequent work with LIGO never would have happened had the SSC been viable, and he describes his early connection as a young student learning general relativity as a connecting point to LIGO. Barish describes his general awareness of what Rai Weiss had been doing prior to 1994 and he relates the state of affairs of LIGO at that point. He conveys the intensity of his involvement from 1994 to 2005 and he describes the skepticism surrounding the entire endeavor and what success would have looked like without any assurance that the experiment would actually detect gravitational waves. Barish describes the road to detection as one of incremental improvements to the instrumentation achieved over several years, including the fundamental advance of active seismic isolation. He narrates the day of the detection, and he surveys the effect that the Nobel Prize has had on the LIGO collaboration and its future prospects. Barish notes the promise that AI offers for the future of LIGO, and he prognosticates the future viability of the ILC. At the end of the interview Barish explains what LIGO has taught us about the universe, and what questions it will allow us to ask in the future as a result of its success. 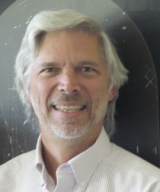 Interview with Kevin Lesko, Senior Physicist at Lawrence Berkeley National Lab and former Spokesperson for LUX-ZEPLIN (LZ), an international collaboration searching for dark matter. Lesko explains why so many different kinds of physicists are involved in dark matter searches and how theorists have provided guidance for experimental and observational work to understand dark matter. He recounts his upbringing in northern California, the scientific influence of his parents and older siblings, and his decision to attend Stanford, where he worked on a tandem Van De Graaff in the nuclear physics lab. Lesko discusses his graduate work at the University of Washington, where he worked under the direction of Bob Vandenbosch on nuclear fission research, and he describes his postdoctoral appointment at Argonne, where he pursued experiments in nuclear fusion and neutrino physics. He explains his decision to join the staff at Berkeley Lab and how his interests centered increasingly on astrophysics with the Sudbury Neutrino Observatory. Lesko discusses his collaborations in Japan and KamLAND’s discovery of the absolute measurement of neutrino oscillations and the origins of the Homestake collaboration. He describes the transition of support for Homestake from the NSF to the DOE and he explains his entrée to the LUX collaboration and the reasons for the merger with ZEPLIN. Lesko explains how LZ needs to be ready to detect dark matter either as a singularity or is comprised of multiple components, and he considers what it might look like for dark matter to be detected. He recounts LZ’s success in ruling out dark matter candidates and he reflects on LBNL serving as a home base while his collaborative research has always been far-flung. At the end of the interview, Lesko considers what we have learned about the universe as a result of LZ, and why mystery and curiosity will continue to drive the field forward. 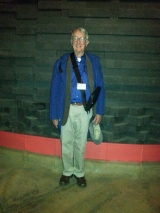 In this interview Richard Garwin discusses topics such as: his parents, growing up in Cleveland, education, Case Institute of Technology (Case Western Reserve University), Leon Lederman, muons, cyclotron,  University of Chicago, Enrico Fermi, nuclear reactors, coincidence circuits.This interview is part of a collection of interviews on the life and work of Richard Garwin. To see all associated interviews, click here.

In this interview, Dr. Aaron Galonsky, Professor of Physics Emeritus, describes his early days working with the Midwestern Universities Research Association (MURA) and experimental nuclear physics. He describes the National Superconducting Cyclotron Laboratory (NSCL) during the 1960s and gives details regarding the K-500 and K-1200 cyclotrons.

In this interview Dr. Sam Austin, University Distinguished Professor of Physics (Emeritus), offers insight into the history of the National Superconducting Cyclotron Laboratory (NSCL) and the early days of research in the lab, starting in 1965 with the K50. He discusses some of what it takes to run a success national research laboratory.

In this interview Dr. Raman Anantaraman, senior physicist and former assistant director of user relations, explains how he ended studying physics, charting his career from India to the National Superconducting Cyclotron Laboratory (NSCL). He gives an account of the development of the Program Advisory Committee (PAC), and how users contributed to the mission of the lab.

Dr. Morton Gordon, Professor Emeritus, talks about how he first arrived at Michigan State University Physics Department in 1959 and describes the various building construction projects that occurred during the early period leading up to the National Superconducting Cyclotron Laboratory (NSCL). He comments on the political and economic climate of the 1960s and how this affected science funding and initiatives.