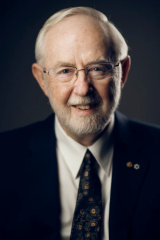 In this interview, Art McDonald discusses: careerlong work around tests of the Standard Model; Sudbury Neutrino Observatory (SNO) measurement of neutrino properties that fall outside the original Standard Model; childhood and family history in Canada; master’s work on positron annihilation; time at the Kellogg Laboratory at Caltech with William Fowler; early origins of and motivations behind the SNO project; postdoc at Chalk River Nuclear Laboratory using a particle accelerator to continue experimental work on fundamental symmetries; history of Chalk River; collaborations with George Ewan; collaborations with Hamish Robertson studying the measurement and production of lithium-6; work at Princeton with Will Happer using lasers to polarize nuclei; building a continuous laser beam at Chalk River; work on parity violation in nuclei; work on the Princeton cyclotron; overseeing Kevin Coulter’s thesis project, the first use of laser-induced-spin-polarization of helium; polarized Helium-3’s current uses; technical challenges of building SNO and the transition from construction to operations; SNO and the solar neutrino problem; Herb Chen’s involvement with the design of SNO; SNOLAB; decision take position at Queen’s University; early published findings from SNO; comparison of Super-Kamiokande and SNO experiments; impact of SNO results on the understanding of the Standard Model; winning the Nobel Prize for solving the solar neutrino problem, observing that solar electron neutrinos were oscillating into muon and tau neutrinos; current work with the DarkSide-20k collaboration and how that work led to an open-source ventilator project in the midst of the COVID-19 pandemic; current SNOLAB DEAP experiment using liquid argon to attempt to detect dark matter particles. Toward the end of the interview, McDonald reflects on interrelatedness across disciplines within physics, and his ongoing curiosity in searches for dark matter and neutrino-less double beta decay.

Anderson talks almost exclusively about his work during the thirties with particles of high energy involved in nuclear reactions. He covers in detail his discovery of the positive electron, his pair production work with gamma rays, his expedition to Pike’s Peak with Neddermeyer and their discovery of the mesotron. He mentions that it was in his speech accepting the Nobel Prize in 1936 that he first mentioned the possibility of negative and positive particles of intermediate mass. After noting the absence of any cosmic ray work during the war years, he mentions the postwar development of cosmic ray work into high energy physics.

Some of the topics discussed include: his youth and education; working on his Ph.D. at University of Illinois; summer symposia at University of Michigan; his work in the early stages of his career; collaborating on a paper with Oppenheimer; accepting position at Harvard in 1934..  Others prominently mentioned:  Wolfgang Pauli, Arnold Sommerfeld, Ivar Waller, Hendrik Kramers, Werner Heisenberg; George Uhlenbeck, Frank Carlson, Walter Heitler, Victor Weisskipf, and Niels Bohr.

Involvement in the history of quantum physics and nuclear physics; thoughts on physics institutions in underdeveloped countries. Studies at University of Vienna in the early 1920s; his work at Felix Ehrenhaft's Institute until 1928; subsequent assistantship with Werner Heisenberg at University of Leipzig for four years. Conversations with Heisenberg about electrons in the nucleus; origins of Beck's interest in nuclear physics after hearing Francis W. Ashton's paper on mass defect at the 1927 Volta Conference; conferences at University of Copenhagen including 1932, where, before the positron was discovered, everyone was making fun of Paul A. M. Dirac's "holes." Theory of beta decay, inability to continue work on it due to lack of additional data when going to Kansas in 1934 and Odessa in 1935. Leaves Odessa; internment in France during the war; escape to Portugal and arrives in Argentina. Also prominently mentioned are: M. Besso, Niels Bohr, Albert Einstein, Wolfgang Pauli, Ernest Rutherford, Erwin Schrodinger, Adolf Smekal, Hans Thirring, Joseph J. Thomson, Victor F. Weisskopf, and Hideki Yukawa.