The Longitudinal Study of Astronomy Graduate Students  (LSAGS) collects data from people who were graduate students in astronomy and astrophysics during the 2006-07 academic year. Working with the American Astronomical Society Demographics Committee, the American Institute of Physics Statistical Research Center collected data in 2007-08 and 2012-13; we will send out a third questionnaire in 2015. The data collected allows us to examine career paths taken by people with training in astronomy – both in and out of astronomy. We are also exploring factors affecting attrition. Using knowledge gleaned from this study, astronomy educators can better prepare students for a breadth of career options. Furthermore, a better understandng of the dynamics surrounding attrition from astronomy will allow for development of programs to increase retention of underrepresented groups.

Rachel Ivie, Principal Investigator, is Director of the Statistical Research Center (SRC) at the American Institute of Physics.  She received her PhD in sociology from the University of North Carolina at Chapel Hill, where she specialized in research methods, statistics, gender, and the life course.  Over the past seventeen years at SRC, she has studied careers of physicists, particularly the careers of women in physics. She authored the first ever thematic report on women in physics, bringing together data from AIP’s surveys with data from outside sources.  She has designed and carried out numerous studies: from the impact of tenure and promotion practices on male and female faculty to a longitudinal study of astronomy graduate students.

Susan White, Co-Principal Investigator, is Research Manager in the SRC. She is director of the Quadrennial Nationwide Survey of High School Physics and also works on the Biennial Academic Workforce Survey. In this capacity, she has co-authored many reports on trends in high school physics, including an examination of women and minorities in high school physics. She has also co-authored reports examining the demographics of physics and astronomy faculty members and the academic job market in physics. Prior to joining the SRC, White, who received her PhD in management science from Texas A&M University, was a professor of management science for twenty years and taught various courses in statistics and operations management to undergraduate and graduate students in Texas, Louisiana, and Washington, DC.

Raymond Y. Chu, Research Associate, oversees the questionnaires and contributes to data analysis and reporting. Chu, a member of the SRC staff for over twenty-five years, has extensive experience in conducting surveys for the astronomy and physics communities.

Mark McFarling, Technical Research Systems Administrator, oversees the technical aspects of the project. McFarling has been with the SRC for almost twenty years and has designed software to facilitate data collection.

Marc Postman is an Astronomer at the Space Telescope Science Institute in Baltimore, MD. Dr. Postman is head of the Institute’s community missions office, which operates the Kepler Data Management Center, the Mikulski Archive for Space Telescopes, and oversees STScI collaborations with several community-led activities. He is a full member of the AAS and served as an AAS Councilor from 2006 to 2009. He is currently the chair of the AAS Demographics Committee.

Dara Norman is an Associate Scientists at the National Optical Astronomy Observatory (NOAO). Her research examines gravitational lensing, large scale structures, and quasars. She serves as Co-chair of the National Society for Black Physicists Astronomy Section and as a Diversity Advocate at NOAO. She has a strong, proven interest in supporting students who are under-represented in STEM fields.

Nancy Remage Evans is an SAO Associate. She was a member of the Chandra X-ray Center staff until retirement in 2010, where she was the Coordinator of the Einstein Fellowship Program. She is a member of the AAS Demographics Committee and just finished serving on the AAS Employment Committee. All these activities contributed to an interest in the transition into STEM related employment, and factors which will result in a strong scientific and technical community in the future. Her research interests are multiwavelength properties of Cepheids and their relation to binary properties of massive stars.

Susana Deustua is an Associate Scientist in the Instruments Division at the Space Telescope Science Institute in Baltimore, MD. Dr. Deustua is the Photometry Lead for the Wide Field Camera 3. She coordinates the High School Research Mentor Program. Prior to joining STScI, she was Director of Education at the AAS. She is a full member of the AAS, served on the Astronomy Education Board and Nominating Committee (chair 2011), and is currently on the Demographics Committee of the AAS. Dr. Deustua has a long standing interest in improving STEM education and employment opportunities. She has been involved with the Longitudinal Survey since its inception in 2006. Her research interests are in photometric calibration, extragalactic astronomy and astronomy education. She brings a broad perspective on careers in astronomy and of astronomy education.

Karly Pitman is a research scientist at the Planetary Science Institute in Tucson, AZ. She specializes in theoretical calculations of light scattering and extinction of micron-sized dust and ice particles found in astrophysical and planetary environments and laboratory analog studies at mid-UV through far-IR roundlengths. She is a full member of the AAS, member of the DPS, and chair of the AAS DPS Professional Development subcommittee. Because Dr. Pitman’s research requires constant interaction and collaboration with observers, theorists, and laboratory astrophysicists, her role in the Longitudinal Study will be essential in suggesting lines of questioning that will engage and take into account the needs of cross-disciplinary researchers in astronomy. She will effectively communicate and disseminate results of this working group at a variety of multi-disciplinary conferences (e.g., AAS, AAS-DPS, AGU, LPSC). Dr. Pitman will also bring recent perspective on questions relevant to several employment sectors (academe, NASA center/FFRDC, soft money research institutes). She is committed to gender in science issues and has previously served in several offices (chapter president, webmaster) in AWIS.

Stefanie Wachter recently accepted a staff scientist position at the tMax Planck Institute of Astronomy in Heidelberg (Germany), after 10 years as a member of the research staff at IPAC (Infrared Processing and Analysis Center) at Caltech. She has had a sustained interest in the status of women in astronomy since she attended the first "Women in Astronomy" meeting in Baltimore in 1992. She has since participated in the two follow-on meetings in 2003 and 2009 and served on the AAS Committee on the Status of Women from 2003-2006. Arriving at IPAC after holding a tenure track position at CTIO, she was struck by the large number of women working at IPAC and the difference it made in the overall comfort level of the work environment. Together with two colleagues, she conducted a work place satisfaction survey at IPAC, which was compared to similar studies published by STScI, Caltech, and, MIT. One of the goals was to explore the reasons why a larger percentage of women are in support type staff positions rather than in tenure-track academic careers. Dr. Wachter’s participation in the longitudinal survey project is a natural extension of this activity. She hopes to determine the various factors that influence women and men along their career trajectory. 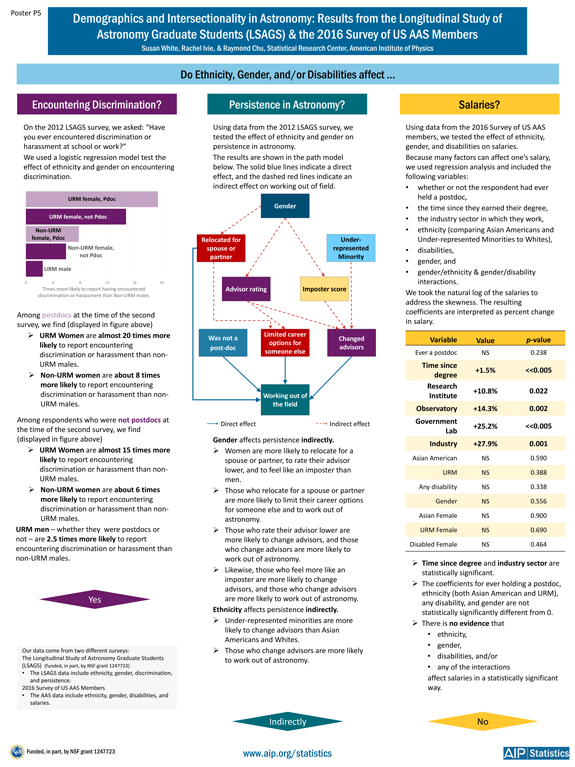 Demographics and Intersectionality in Astronomy 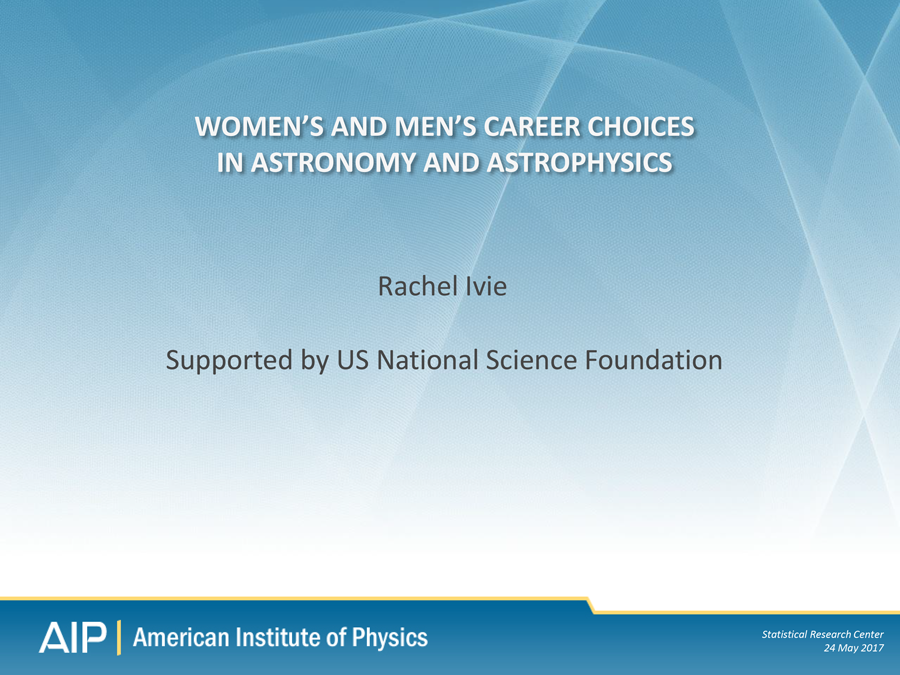 Women's and Men's Career Choices in Astronomy and Astrophysics

Women’s and men’s career choices in astronomy and astrophysics

Results from the Longitudinal Study of Astronomy Graduate Students

Women and the Imposter Syndrome in Astronomy