The White House and congressional leaders have endorsed budget legislation that would raise the cap on non-defense discretionary spending by 4% for fiscal year 2020, enabling Congress to increase funding for federal science programs.

The White House and congressional leaders announced an agreement yesterday to raise caps on discretionary spending and suspend the federal debt ceiling for the next two fiscal years. Encapsulated in legislation called the Bipartisan Budget Act of 2019, the deal paves the way for Congress to continue its recent run of funding increases for science agencies.

In setting spending levels for the final two years covered by the Budget Control Act of 2011, the deal also marks a conclusion to the use of statutory spending caps and automatic budget sequestration as checks on the appropriations process. 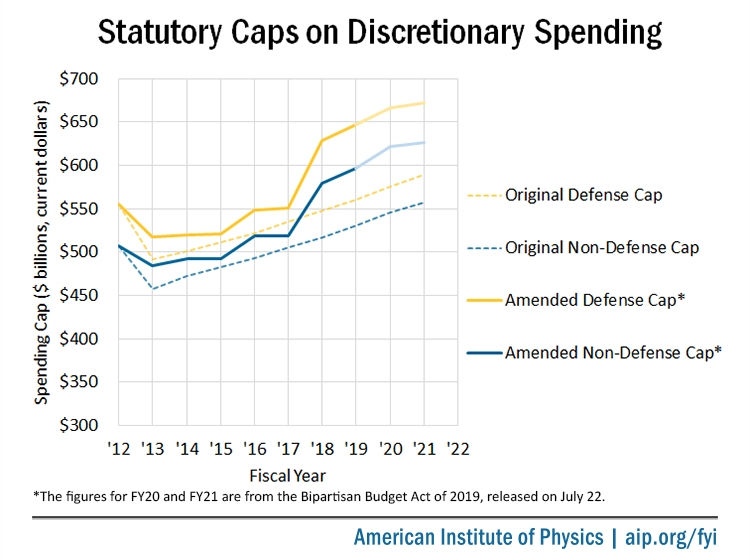 These increases are not as large as those provided through the last budget agreement, reached in 2017, which raised the cap on non-defense spending by 12% for fiscal year 2018 and 3% the following year. Whereas that agreement resulted in a windfall for several science agencies, the new one enables Congress to sustain the current funding levels with room for some additional increases.

Though some factions in Congress are unhappy with the legislation, the leaders of both parties have endorsed the agreement and President Trump has tweeted his support for it as well. The House plans to vote on the bill by the end of the week before the chamber leaves on August recess, and the Senate is expected to hold its vote before it departs the following week.

If the legislation is enacted, Congress and the president still must agree on how to apportion the budget among the 12 annual appropriations bills that fund the federal government.

The House already approved most of its bills this summer, employing the assumption that non-defense spending would increase 6%. Meanwhile, the Senate opted to wait until a budget agreement was reached before advancing its own proposals, which it is now likely to release sometime after Congress returns from recess in September.

Although House appropriators will likely have to rein in at least some of their proposed spending increases for science programs, their finished bills represent a starting point for negotiations with the Senate, conveying their prioritization of areas such as climate change research.

Given that the start of fiscal year 2020 on Oct. 1 is fast approaching, Congress may well use one or more stopgap funding measures to buy time for crafting final spending legislation. However, the budget agreement decreases the possibility of another government shutdown.

In a set of principles released in conjunction with the agreement, congressional leaders and the Trump administration conveyed a desire for a smooth appropriations process, committing to “minimize procedural delays” and to refrain from adding controversial policy demands to their spending bills.

Correction: A previous version of this article incorrectly stated that the budget legislation would raise the defense spending cap to $677 billion in fiscal year 2020.