The final appropriations legislation for fiscal year 2018, on track to be enacted this weekend, includes significant spending boosts for the federal science agencies. A few, such as the National Science Foundation, are slated for moderate increases, while others, such as the Department of Energy Office of Science and National Institutes of Health, stand out for the huge scale of their increases.

Since last spring, Congress has indicated it would resist the Trump administration’s proposals to impose deep cuts on many nondefense programs, including those at federal science agencies. However, the extent to which it would push back did not become clear until it reached an agreement to raise caps on discretionary spending last month. The deal provided room for Congress to increase nondefense spending by $60 billion, or 12 percent, and defense spending by $78 billion, or 14 percent.

The final package is a boon for federally sponsored scientific research, infrastructure, and STEM education. However, agencies do not benefit equally. Billions of dollars in new funding will flow to research and facilities at the Department of Energy and the National Institutes of Health. Other science agencies, such as the National Science Foundation, are receiving more moderate increases. A few programs that have been in the political crosshairs, such as the research offices at the Environmental Protection Agency, are likely to count their outcome of flat funding as a win. 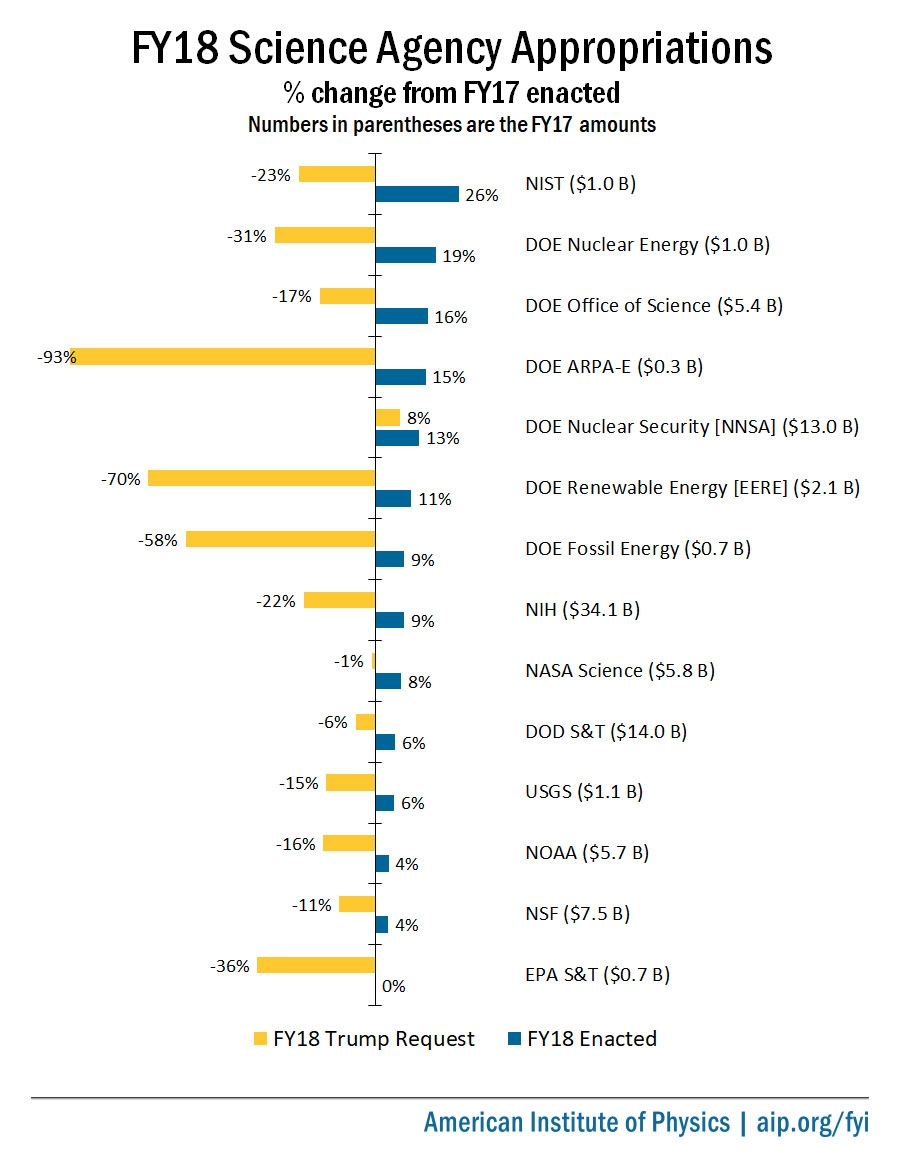 Some of Congress’ priorities are evident in how they divvied up support among the science agencies. Agencies with substantial physical sciences portfolios, such as the DOE Office of Science and National Institute of Standards and Technology, are slated to receive among the largest boosts by percentage. On the other hand, programs that focus on climate and other environmental research are mostly held flat, including NASA Earth Science, National Oceanic and Atmospheric Administration Climate Research, and EPA S&T.

The bill serving as the vehicle for the package is already moving quickly through Congress. The House approved it this afternoon on a vote of 256 to 167. A Senate vote is up next, and President Trump is expected to sign the package into law over the weekend. The government’s latest spending deadline is Friday night, meaning that if certain senators drag their feet it is possible there will be another brief government shutdown over the weekend. However, it is expected that when the federal work week begins on Monday, it will be under appropriations that will last through the end of the fiscal year on Sept. 30. 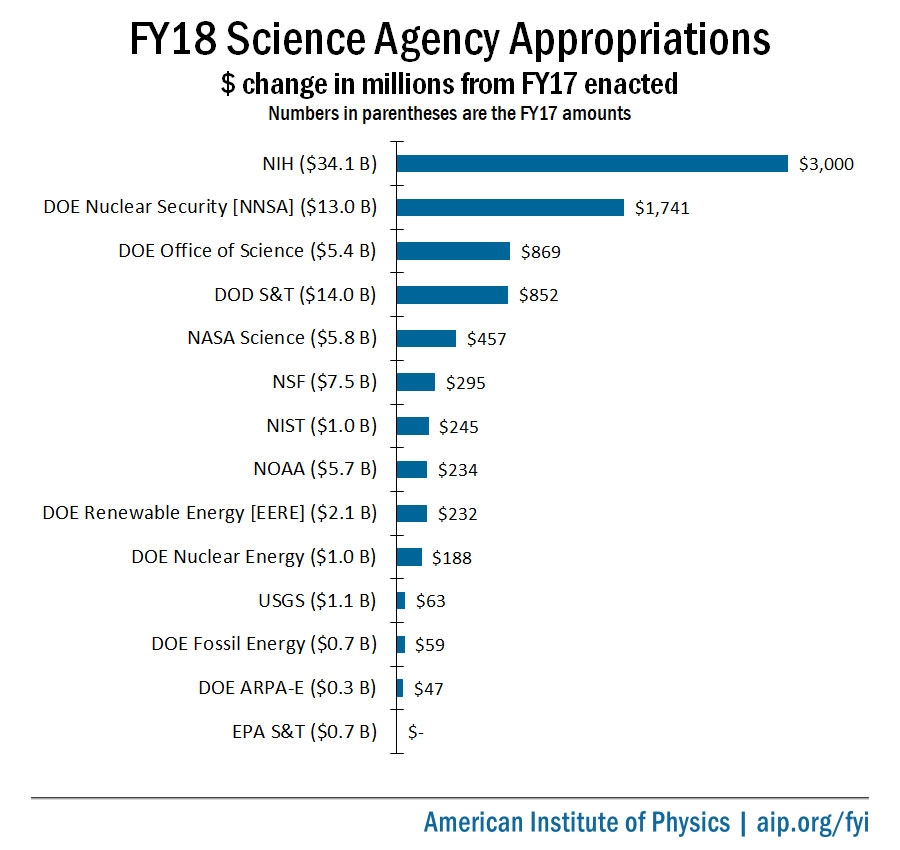 Detailed tables with the budget outcomes for fiscal year 2018 by science agency and program are available in FYI’s Federal Science Budget Tracker. In upcoming days and weeks, FYI will also publish a series of bulletins detailing the budgetary and policy outcomes for individual agencies.

Congress’ joint explanatory statement accompanying the legislation, which contains most of those details, is already publicly available, divided into the following titles:

The bill spreads an $868 million or 16 percent funding increase for the Office of Science across its programs, with double-digit increases for all six of the major research programs: Advanced Scientific Computing Research, Basic Energy Sciences, Biological and Environmental Research, Fusion Energy Sciences, High Energy Physics, and Nuclear Physics. A number of facility construction projects and upgrades at the national laboratories are receiving appropriations well above the administration’s request, including new starts for construction of two light sources upgrades and a neutron source upgrade.

Within a $1.7 billion overall increase for NNSA, its weapons research, development, test, and evaluation programs would increase by 10 percent to $2 billion. The bill includes much of the requested funding for Enhanced Capabilities for Subcritical Experiments and the Stockpile Responsiveness Program, two new major efforts aimed at improving NNSA’s experimental capabilities and weapons workforce. The National Ignition Facility at Lawrence Livermore National Laboratory and the OMEGA Laser Facility at the University of Rochester, which have been targeted for cuts in the fiscal year 2019 request, would receive increases of 4 and 10 percent, respectively.

Congress roundly rejected the administration’s deep proposed cuts to DOE’s applied R&D programs. Funding for the Office of Energy Efficiency and Renewable Energy is increasing by 11 percent and for the Office of Nuclear Energy by almost 20 percent. The Advanced Research Projects Agency–Energy, targeted for elimination by the administration, will not only survive, but its annual budget is reaching an all-time high of $353 million, a 15 percent increase.

The budget for the National Science Foundation is increasing by 4 percent, or nearly $300 million, while the agency’s Research and Related Activities account that supports extramural research grants is slated for a 5 percent increase to $6.33 billion. As in most years, Congress will give NSF full discretion on how to allocate that amount between research disciplines and other priorities. Congress met the administration’s $183 million request for Major Research Equipment and Facilities Construction, which includes funding for Regional Class Research Vessels, the Daniel K. Inouye Solar Telescope, and the Large Synoptic Survey Telescope.

An 8 percent increase for NASA’s Science Mission Directorates hides considerable variation between divisions. The Planetary Science Division is receiving almost $400 million in new funding, a 21 percent increase, with much of the increase dedicated to the Europa Clipper and Lander missions, which Congress also supported in fiscal year 2017. The Earth Science Division budget remains flat but funding for the five missions that the administration targeted for cancellation is explicitly protected. NASA’s two next-generation astrophysics space telescopes, the James Webb Space Telescope and Wide Field Infrared Survey Telescope, are both funded at levels that will allow their development to continue.

The bill provides NOAA with a $234 million or 4 percent funding increase. Funding for NOAA’s research line office is increasing by 7 percent, although Climate Research within the line office remains flat. Congress accepted NOAA’s requested funding levels for the flagship GOES-R and JPSS satellite programs, and is providing additional funds to ramp up the Polar Follow On satellite program. The bill also includes $121 million for the acquisition of a replacement aircraft for the Hurricane Hunter fleet.

NIST’s Scientific and Technical Research Services account is receiving a 5 percent, or $35 million increase. The bill also provides $210 million in additional funding for research facilities construction. Last month, in a supplemental budget proposal for fiscal year 2018, the administration suggested that Congress appropriate funds for laboratory facilities in Maryland and Colorado.

Funding for the Department of Defense’s Research, Development, Test, and Evaluation accounts is increasing by $16 billion, or 22 percent, outstripping the administration’s proposed increase for fiscal year 2018. The increase flows mainly to late-stage technology development, prototyping, and testing. Funding for the three early-stage Science and Technology accounts increases by 6 percent, or about $850 million.

Congress is providing NIH with a hefty $3 billion or 9 percent increase. Several of NIH’s high-priority initiatives, including the BRAIN Initiative and the All of Us precision medicine initiative, are receiving increases, while all of the institutes will see at least a 5 percent funding boost. The agreement also rejects the administration’s proposal to implement a cap on reimbursements for facilities and administrative costs, stating that NIH must continue using its current methodology for negotiating indirect rates.

Congress has rejected the administration’s proposal to eliminate several major Department of Education grant programs that states and districts can use to support STEM initiatives, among other activities, instead providing a $700 million funding boost for the Student Support and Academic Enrichment program and essentially maintaining funding levels for the 21st Century Community Learning Centers and Supporting Effective Instruction State Grants programs. The bill carves out $50 million in the Education Innovation and Research program to support STEM and computer science education projects and notes that a wide range of DOEd grant programs can be used to support STEM education initiatives.

The bill provides an $63 million or 6 percent increase for the U.S. Geological Survey, much of it benefiting volcano and earthquake hazards programs. While Congress accepted the administration’s proposal to restructure the Climate and Land Use mission area into a new Land Resources mission area, it directs USGS to continue funding existing programs at the enacted fiscal year 2017 level, and provides funding for the agency’s eight regional Climate Science Centers.

Funding for EPA’s Science and Technology program remains flat at $706 million, following implementation of a $7 million recission to reflect the agency’s diminished workforce level. Congress does not provide funding for EPA’s proposed agency-wide workforce restructure initiative, stating that it does not anticipate the closure or consolidation of any EPA regional offices.