The House Appropriations Committee approved a series of bills this week that propose significant funding increases for science agencies, once again rejecting the Trump administration’s call for across-the-board cuts to nondefense programs.

This is the first time since 2010 that Democrats have been in control of the appropriations process in the House. In contrast with recent years, this year’s bills emphasize research connected to understanding and mitigating the impacts of climate change. For many other research areas, though, the bills exhibit continuity. For instance, the committee proposes to maintain the recent trend of growth for the Department of Energy Office of Science, National Science Foundation, and National Institutes of Health, among other agencies.

Recent funding increases have been made possible by bipartisan agreements that raised statutory caps on federal discretionary spending. Unless a new agreement is reached this year, the caps are set to snap back to more stringent levels, which would cut both defense and nondefense programs by about 10%. Negotiations have begun on raising the caps that are in place for fiscal year 2020 and 2021, though they could be substantially impeded by ongoing battles between President Trump and congressional Democrats.

In the absence of an agreement, the House committee adopted preliminary spending allocations that permit a 6% increase to nondefense programs and a 3% increase for defense programs. The counterpart committee in the Senate has yet to advance any spending bills or formally propose overarching spending levels.

FYI will publish detailed agency-by-agency summaries once Senate appropriators have advanced their proposals. Current details on program-level proposals for science agencies and links to budget documentation are available in FYI’s Federal Science Budget Tracker. Highlights for selected agencies are summarized below. 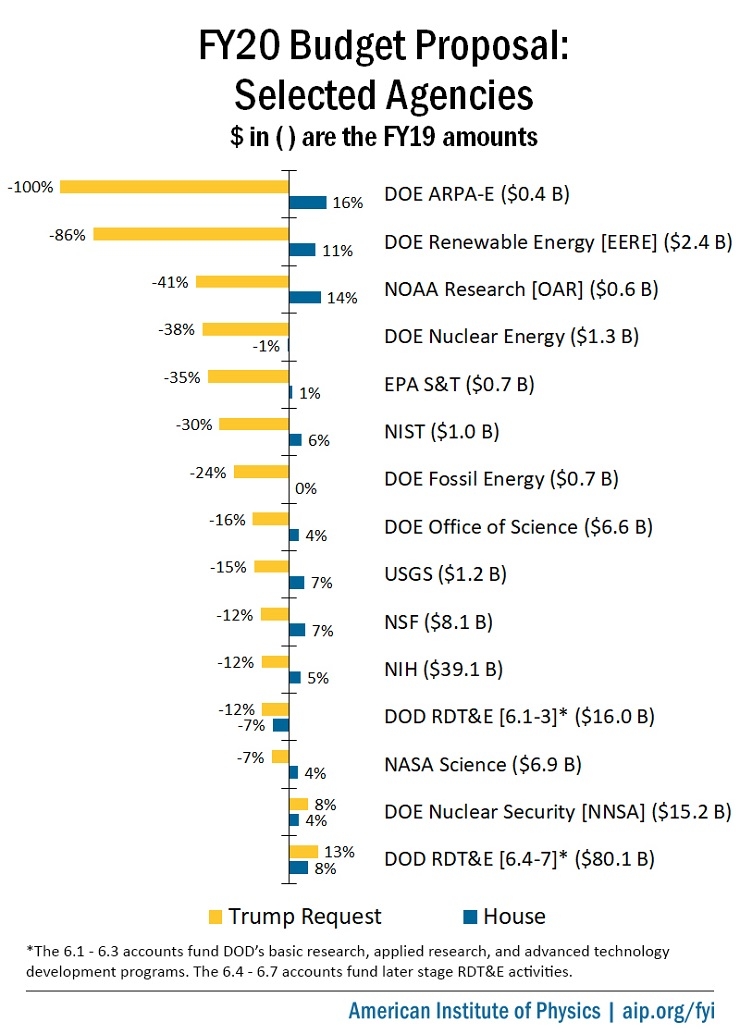 As in previous budget cycles, the committee criticizes the Trump administration’s policy of prioritizing “early-stage” research over later-stage energy R&D activities, which the administration asserts are best supported through private sector investment.

In the report accompanying its spending bill for DOE, the committee explains that it “rejects this short-sighted and limited approach, which will ensure that technology advancements will remain in early-stage form and are unlikely to integrate the results of this early-stage research into the nation’s energy system.” The committee notes its legislation instead provides funding for a “comprehensive, balanced approach that also includes medium- and later-stage research, development, deployment, and demonstration activities.”

Among DOE’s applied energy R&D programs, the Office of Energy Efficiency and Renewable Energy and the Advanced Research Projects Agency–Energy would see the largest increases. In the face of the administration’s third straight proposal to terminate ARPA–E, the bill would raise its budget by 16% to $425 million. The budget for EERE would rise 11% to $2.65 billion, with increases spread across sustainable transportation, renewable energy, and energy efficiency programs. Meanwhile, the Offices of Nuclear Energy and Fossil Energy would receive essentially flat funding, though carbon capture programs would see significant increases.

The Office of Science, which focuses on fundamental research, would see its budget increase 4% to $6.87 billion. Among its six disciplinary research program areas, most of the new resources would go toward fusion energy sciences, high energy physics, and nuclear physics. A proposed boost of 22% for the fusion program is driven by a near doubling of the U.S. contribution to construction of the France-based ITER tokamak facility.

The committee proposes to increase the budget for NASA’s Science Mission Directorate by 4% to $7.16 billion. In its report accompanying the NASA spending bill, the committee criticizes the administration’s budget for seeking a shift away from “legacy programs and programs with clear environmental and educational interests.”

As it did last year, the committee rejects the requests to defund NASA’s Office of STEM Engagement and cancel two earth observation satellite programs, PACE and CLARREO Pathfinder. It instead proposes to increase funding for the education office by $13 million and boost the Earth Science Division’s budget by 5% to $2.02 billion.

The committee again rejects the proposed termination of the Wide Field Infrared Survey Telescope, instead providing it with $511 million, noting it was the highest priority recommendation in the 2010 decadal survey for astronomy and astrophysics. The committee also continues to support work on both the Europa Clipper mission and a follow-on lander, which were priorities championed by Rep. John Culberson (R-TX), who lost his seat in last year’s election. The committee’s bill provides the requested $593 million for the Clipper and nothing for the lander, stating that the $195 million already provided for the current fiscal year will be enough to fund work on the mission in the year ahead as well.

The committee did not address the administration’s recent supplementary request for accelerating NASA’s lunar exploration program. Of the additional $1.6 billion requested, $90 million would go to the Science Mission Directorate for developing a robotic rover through the Lunar Discovery and Exploration program. While the committee expresses support for the program, it provides the initial requested amount of $210 million.

NSF's budget would rise 7% overall to $8.64 billion under the committee’s proposal. Most of the increase would go to the agency’s main research account, which would grow 9% to $7.11 billion.

While Congress typically does not specify how NSF should apportion funds between its six disciplinary research directorates, in past years appropriators have included report language to restrict the growth of those dedicated to geosciences or social sciences. Reversing that approach, this year’s report includes language directing NSF to fund the social sciences directorate at no less than the current level.

The committee matches the requested $223 million for major facility construction projects, including $33 million to begin upgrades on particle detectors at the Large Hadron Collider, $46 million for the Large Synoptic Survey Telescope, $98 million for modernization of research bases in Antarctica, and $45 million for a new mid-scale research infrastructure program. The committee does however express concerns about NSF’s planning for the next generation of large facilities, encouraging the agency to produce a “comprehensive and prioritized list of large-scale facilities requested by NSF-supported science disciplines.”

DOD. The Department of Defense’s science and technology programs would drop 7% overall to $14.84 billion under the committee’s proposal, near the amount they received in fiscal year 2018. The brunt of the cut would fall on applied research and advanced technology development programs, while funding for basic research would only drop 1% to $2.51 billion.

NIST. The National Institute of Standards and Technology’s budget would increase 6% to $1.04 billion. The agency’s main research account would receive a 4%, $27 million increase. The committee specifies that at least $8 million of that amount should go toward increasing funding for quantum information science in support of the recently enacted National Quantum Initiative Act.

NOAA. While the total budget for the National Oceanic and Atmospheric Administration would remain about flat, funding for its main research office would grow 14% to $644 million. The increases are channeled to supercomputing, climate science, and weather research.

NIH. The National Institutes of Health would receive a $2 billion boost for the fifth year in a row under the committee’s proposal, with increases spread relatively evenly across NIH’s institutes. The bill also retains a prohibition on modifying overhead cost reimbursement rates for extramural grants.

USGS. The U.S. Geological Survey’s budget would increase 7% to $1.24 billion, and the committee does not adopt the administration’s proposed reorganization of the agency’s science mission areas.

OTA. The bill that funds Congress’ own operations includes $6 million to revive the Office of Technology Assessment.