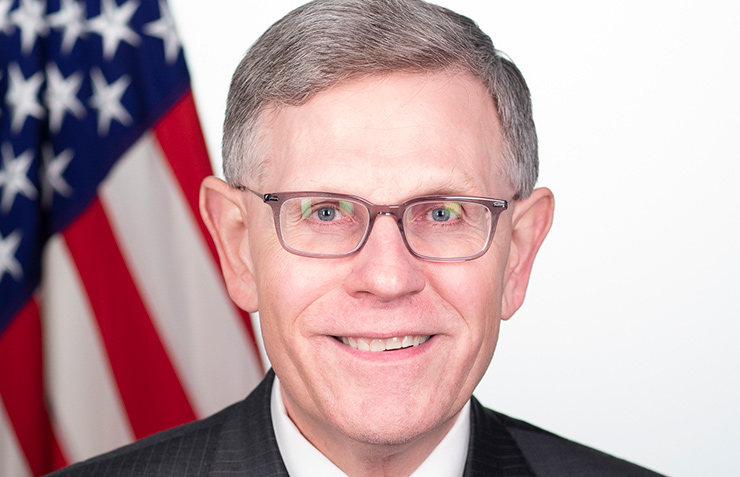 A new phase in the history of the White House Office of Science and Technology Policy began in January with the Senate confirmation of University of Oklahoma meteorologist Kelvin Droegemeier as its director. Shortly after he was sworn in, Droegemeier outlined his priorities for the office at the annual meeting of the American Association for the Advancement of Science. Now, he is making an increasing number of public appearances and will address the AAAS Forum on Science and Technology Policy this Thursday.

FYI recently spoke with Droegemeier about the office, his plans for it, and current policy issues. He stressed the role that “American values” play in issues ranging from relieving administrative burdens on researchers to safeguarding U.S. research from misappropriation by foreign actors. He also discussed concerns within the scientific community about matters such as climate change and pervasive sexual harassment.

What follows are condensed highlights from the interview. A full transcript is available here.

On his plans for a review​ of the U.S. R&D enterprise

I actually started thinking about this before I was confirmed, what would be the things that I would bring to the position that would add value, given the many, many things that OSTP was already doing. There were like 80 or more projects that were under way. It ranged from things like space weather to STEM education to opioids to oceans to emerging contaminants, and quantum, and AI. And I said, "That’s great. What value can I add to that?" And what I came up with were several things.

One was having a substantial, major assessment of the status of our R&D enterprise — I called it “quadrennial” in my AAAS speech, but honestly it's probably more like every seven years that you do something like this — that takes the National Science Board's Science and Engineering Indicators, but it also takes information from other sectors and does a full-on state of the S&T enterprise [review] in the United States, especially in the context of the global enterprise. What are our strengths? What are the gaps?

As a weather guy, I kind of called it the initial conditions of the forecast. High energy physics and other parts of the physics community, they think decades and longer. You look at ITER, you look at the Large Hadron Collider, you look at all these experiments. Physicists are quite good at doing long-term forecasts. What I would like to do is to take that same capability and think longer term in other sectors of science and technology.

On the importance of “American values” to the enterprise

The thing that really makes this whole enterprise sing is our values. And frankly, this is something I don't think we do a good enough job really messaging, even to, say, graduate students, and post-docs, and students looking to enter STEM fields or fields of national, critical need. There's lots of opportunity in the world, but what really sets us apart is, in addition to all of our physical assets and our intellectual talent, is the values.

On efforts to protect U.S. research from exploitation by other nations

I've met with many university presidents in the time I've been here, and to a person each one of them listed this as one of their highest priority topics. Because there has not been an OSTP director, OSTP has not really been active in this arena. I'm happy that individual agencies are making progress and doing things. The National Academies is involved. Other groups are involved. For us, one of the unique roles of OSTP is its convening authority. What I want to see OSTP do is to bring folks together to have a more holistic, cross-sector conversation.

I was just at NIH for half a day and talked with folks there about this very issue. I think at the end of the day what’s really important is that we have a balance. We know things are happening. In the last couple years, research universities, people that do research, have really come to grips with the fact that this isn’t just somebody blowing smoke, some of the stuff is really happening.

We have to balance that vigilance with maintaining the openness of our research environment and not in any way providing some type of a negative context for our international colleagues who historically have been so important to our research enterprise. We want them to come here legally, we want them to come here with our values in mind, because that's what this country is founded upon. And I think part of that balance involves making sure that we don't discriminate or do things that dissuade individuals from other countries to come in to study here.

But when they do come here, they need to realize that we take seriously the protection of our research assets. It's a very tough problem that we have to engage.

I think the topline messaging from us is that harassment of any kind is absolutely patently unacceptable in the research environment. Period. Done. That's end of sentence. It is unacceptable.

How things get dealt with are much more complicated in terms of their legal issues. Obviously, there's Title IX and all that kind of thing. And so ultimately what we're talking about here — and this is really the crux of the matter — is a culture change. What I think that OSTP can do is to say we have no tolerance for this sort of thing, and so that hopefully one thing coming out of this would be to have a set of principles by which we have to operate and make sure these things get implemented.

And then, of course, there has to be accountability and we have to have training. And then also people that are actually in the research environments have to have ways to bring things forward and to know that, if something is brought forward, that there is a process by which they are going to be listened to and taken seriously.

We have to protect against false claims. You could instantly destroy someone's scientific career if somebody just decides that they don't like somebody else and are going to bring forth a claim. I think we've got to work together on doing this.

On Plan S, a Europe-led initiative for moving to full open access in scientific publishing

One of the things this government will not do is to tell researchers where they have to publish their papers. That is absolutely up to the scholar who's doing the publication. There's just no question about that.

We certainly strongly support open access, and have since the Holdren memo came out in 2013. We want timely access to the information, to data, and to publications and so on. That hasn't changed at all.

This goes back to the president's fundamental philosophy of let's not shackle people, let's let them be free to choose where they publish. Let's not put any administrative constraints on them.

On reducing administrative burdens in research

The latest Federal Demonstration Partnership survey came out and showed that, essentially, the amount of time that faculty spend on federally funded projects in terms of their compliance-related non-research activities is still on the order of 42 to 44 percent. And the Trump administration, one of the things that I really love about it is it's so focused on removing barriers to progress. Let's remove the burden of the regulatory activities that show no practical value and make sure we retain those, like human subject research protocols and animal research protocols and safe handling of chemicals and virulent agents and things. We absolutely value those. If they're a burden, they're an appropriate burden.

Ultimately my job as the OSTP director is statutorily to provide the president with the best science advice possible, making sure that advice is at the table in relevant decisions. The thing you mention is something that came out of the National Security Council. I don't presume to speak for other components of the White House or any other agency or anything like that. I think it's best for me to direct you to them for any information about that.

On his own calls to further address uncertainties in climate science

The models are exceptionally capable. The climate models are, weather models as well. But they're exceptionally capable within the bounds of our own current understanding. The limitations of climate models are well known, well understood. We have extraordinarily powerful computers out there, but the way these models are structured and have been for decades, and the way the computer architectures are structured, you can only get less than 10 percent of the actual total performance out of the machine.

Then the other component is sort of the forcing of the model with these socio-economic pathways, the RCPs as they're called. Trying to predict what the future will be like. That's why you see such spread in the model solutions after about 20 or 30 years, which is where the human, the anthropogenic effects become more pronounced. That's where the uncertainty becomes larger, understandably so. We all get that. I think for me, I'd just love to see continued research done to improve our understanding of the atmosphere, to improve the models, and especially to improve the computing.

There's some cool stuff we're doing with health care data, with workforce data. And also an initiative with Historically Black Colleges and Universities, in terms of research capability, capacity, and education, also in areas of having them participate in some of their unique capabilities in workforce development and re-skilling.

On the President’s Council of Advisors on Science and Technology

PCAST will be coming back, I’m happy to say. We have individuals who have been identified to serve on that great body, and we’re very excited about that. That will happen this year and I think it’ll happen hopefully soon. When that actually gets announced, we’ll be making some other announcements about that, that I think you’ll find very exciting for the future of science.

On the current structure and staffing of OSTP

We’re about 65 to 70 people strong. We’re a very diverse organization. Roughly half of those individuals are women. I take great personal pride in that diversity because I’ve worked my whole career on diversity enhancement.

We have a science division, we have a technology division, and then we also have a national security and international affairs division. Other OSTPs have had a fourth division, but the three that we have have been there for quite a while and I see no real need to change it.

As you know, Michael Kratsios has done a phenomenal job of running OSTP from the early days of the administration. He was recently nominated to be the associate director for technology. I don't anticipate trying to get Senate confirmation for the other two with only 18, 20 months left in the first term here, because it's a long process and we have a lot of work to do here.