In his first public speech as director of the White House Office of Science and Technology Policy, Kelvin Droegemeier indicated his top priorities include improving coordination across the U.S. R&D enterprise, addressing harassment in science, relieving administrative burdens, and protecting research from misappropriation. 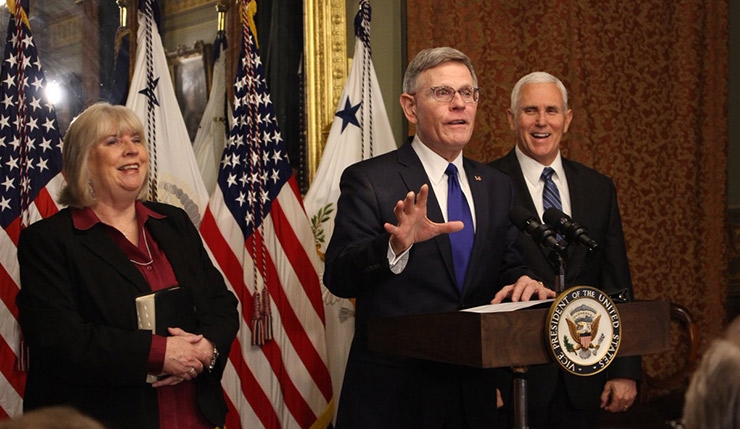 Kelvin Droegemeier speaks after being sworn in as director of the White House Office of Science and Technology Policy. He is accompanied by his wife Lisa Droegemeier and Vice President Mike Pence.

On Feb. 11, Vice President Mike Pence swore in Oklahoma meteorologist Kelvin Droegemeier as director of the White House Office of Science and Technology Policy, officially bringing the position’s two year vacancy to an end. Four days later, Droegemeier made his first public appearance as director, addressing a large audience at the annual meeting of the American Association for the Advancement of Science in Washington, D.C.

In his remarks, Droegemeier outlined a set of policy priorities while avoiding such controversial issues as President Trump’s views on climate change and proposed cuts to research budgets. He spoke broadly of a need to rethink how federal research programs are governed and emphasized the private sector’s role in the U.S. R&D enterprise. He also expressed his aim to address more specific matters such as sexual harassment in science and the administrative burdens that impede research.

Droegemeier calls for sweeping review of US research enterprise

Droegemeier spoke positively of the current state of science and technology in the U.S., saying that “there is literally no better time in the history of this planet or any better place on Earth to be engaging the quest for scientific knowledge and understanding than right here, right now in America.” Referring to the period since World War II as the “first great bold era of science and technology” in the U.S., he praised the growth in research funding and expansion of higher education during that time, calling particular attention to the growth of private sector investment in R&D.

Laying out his agenda, Droegemeier grouped his ideas into three “pillars,” on which a “second bold era” will rest. He said the first pillar entails taking a long-term, holistic view of research and called for a quadrennial assessment of the U.S. R&D enterprise. “In much the same way that a computer weather forecast begins with knowing the current state of the atmosphere, the path toward ensuring unquestioned American dominance in R&D begins with a clear picture of today’s capabilities, but in a global context,” he said.

In addition, Droegemeier stressed the benefits of viewing R&D efforts less in terms of discrete programs and more as “thematic portfolios” that cut across research topics and disciplines. As an example, he pointed to artificial intelligence, noting it spans disciplines such as computer science, applied mathematics, industrial engineering, psychology, and ethics. He said it is therefore difficult at present to answer such elemental policy questions as how much funding is dedicated to artificial intelligence or how many students and researchers are working in the field.

Emphasizing that thinking in terms of portfolios makes it easier to leverage the links between R&D programs, Droegemeier argued, “If we do this, we’ll maximize the use of available dollars, minimize unnecessary duplication, and greatly — and this is important — greatly increase collaboration.” He noted he had implemented a similar approach as Oklahoma’s secretary for science and technology and that it allowed the state, which he said is “not as well resourced” as others, to make the most of what it has.

Droegemeier did not indicate how his conception relates to the model set by current cross-cutting efforts such as the U.S. Global Change Research Program and the National Nanotechnology Initiative. He did say it is not a proposal for a “wholesale change” in the structure of federal research budgets. 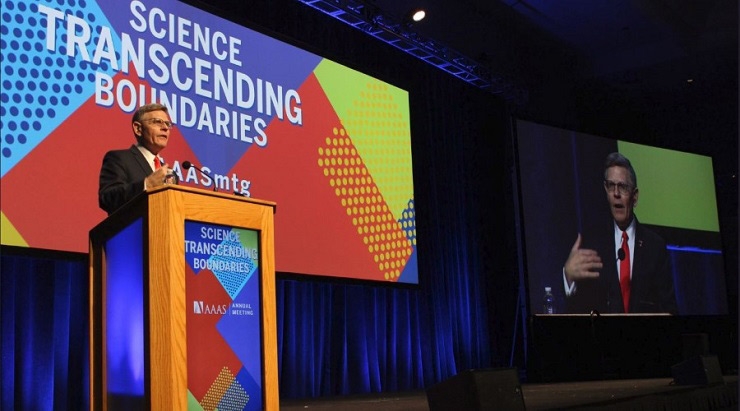 Droegemeier’s second pillar involves improving partnerships among the federal government, industry, academia, and nonprofit sector, focusing on “intersection points” such as data use, workforce development, and access to facilities. He also said it is important to remove roadblocks to innovative activity by reforming intellectual property policies, referencing the Trump administration’s current efforts in the area.

Expressing a desire to “rekindle those famous blue sky industrial research labs of the past,” Droegemeier also proposed the creation of what he provisionally called “alpha institutes.” He described them as a “scientific crucible” where top researchers from different sectors would come together to “pursue absolutely transformational ideas on some of the biggest challenges that face humanity today like space exploration, climate change, eradicating disease, and making it possible for people to live longer and healthier lives.” He said the institutes would be based at universities and colleges, funded “primarily” by industry and nonprofit institutions, and would benefit from “streamlined” IP policies.

The third pillar, Droegemeier said, entails ensuring the “safety and security of our researchers and our innovations,” and working to “maximize the contributions of our collective intellectual endeavors.” He stressed the importance of preventing sexual harassment and fostering diversity and inclusiveness to create “safe, welcoming, and accommodating environments for performing research.” He also discussed his desire to relieve administrative burdens on research that are “unnecessary and wasteful,” citing estimates that their cost “runs into a few billion dollars a year.”

Droegemeier also grouped under his third pillar the need to prevent the misappropriation of U.S. research. He remarked, “We want students and researchers in America to reap the benefits of an open environment. But at the same time, we have to take appropriate precautions to assure that our resources do not fall into the hands of those attempting to do us harm, or those who would seek to reap the benefits of our hard work without doing hard work themselves.”

The federal government is currently seeking to prevent other nations, particularly China, from using both licit and illicit means to exploit U.S.-funded R&D. Government efforts include imposing new export controls on certain kinds of technology and barring Department of Energy employees, contractors, and grantees from participating in talent recruitment programs operated by nations deemed “sensitive.” Without mentioning specific efforts or nations, Droegemeier said the issue is among his “top priorities,” and that “several university presidents, various associations, and government officials” had already told him it is one of the top matters they are grappling with.

Droegemeier challenged on climate and funding

Introducing Droegemeier, AAAS CEO Rush Holt described him as a “solid scientist” with considerable policy experience and an “accessible manner.” Holt, a physicist who was a Democratic congressman from 1999 to 2015, is retiring from his position later this year.

Holt called on Droegemeier to remain in close contact with the scientific community and to “make clear to President Trump and to others in the administration that science can help respond to the problems in front of us and in front of them.” He also urged Droegemeier to address three specific issues: bias and harassment in science, climate change, and research funding. While the Trump administration has begun to address the first of these issues, its actions on the other two have provoked protest from within the scientific community.

On climate policy, the administration has worked to roll back regulations advanced during the Obama administration. While it has been largely passive with respect to climate science, Trump himself has recently rejected the scientific consensus on the subject. Publicly, Droegemeier has not engaged extensively with the topic, including in a recent interview with Science magazine. Nevertheless, Holt set strong expectations for him, saying, “I think we hope and expect he will be able to clearly communicate the accepted and understood evidence on climate science that human activity is changing the climate and it is costly in lives and dollars and action is required.”

On funding, the administration has twice sought significant cuts to many research programs as part of its larger goal of reducing federal spending. Although Congress has rejected those proposals and science budgets are at a historically high level, Holt said funding is nonetheless “suboptimal.” Addressing the subject in his own remarks, Droegemeier acknowledged funding’s importance, while adding that “in the national context, I think we need to think about more than money,” pointing to the importance of non-government assets in research.

President Trump’s next budget request is expected to be released in mid-March, more than a month behind schedule due to the recent government shutdown. As Droegemeier arrived near the end of the budget preparation process, it is unlikely he will have a major influence on the budget’s contents.