University of Oklahoma meteorologist Kelvin Droegemeier received broad, bipartisan praise from senators at a hearing on his nomination to lead the White House Office of Science and Technology Policy. Droegemeier repeatedly stressed that science must be free from political influence and outlined his views on growing global R&D competition, particularly from China.

Today, President Trump’s nominee to lead the White House Office of Science and Technology Policy, University of Oklahoma meteorologist Kelvin Droegemeier, appeared before the Senate Commerce, Science, and Transportation Committee for his confirmation hearing alongside two other presidential nominees. Droegemeier received broad and bipartisan praise from committee members, who lauded his scientific credentials as a severe storm researcher and his science policy expertise at state and federal levels.

Committee Chair John Thune (R-SD) said Droegemeier is “eminently well qualified” for the position and urged quick action on his nomination, noting the post has been vacant since Trump took office. Thune observed the Senate previously confirmed Droegemeier twice by voice vote after President George W. Bush and President Obama nominated him to serve two successive terms on the National Science Board, which governs the National Science Foundation. Droegemeier became the vice chair of the board during his second term.

Ranking Member Bill Nelson (D-FL) agreed that Droegemeier is highly qualified for the position, citing a letter of support sent to the committee by former Lockheed Martin CEO Norm Augustine and Neal Lane, who was President Clinton’s science advisor. “I think a lot of us on this committee are going to be happy that you are the White House science advisor,” Nelson concluded.

While the OSTP director has traditionally also served as the president’s personal science advisor, it is not yet clear whether Trump intends to confer that status on Droegemeier.

The committee is scheduled to vote to advance his nomination to the full Senate on Aug. 29. 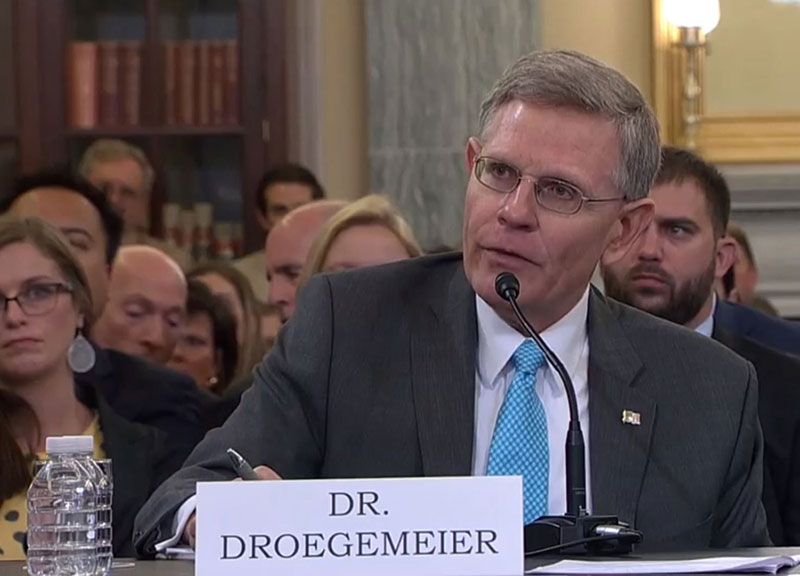 “I am a scientist, I am a storm chaser, and I am an educator,” Droegemeier remarked in his opening statement, recounting how seeing a tornado close up for the first time at the age of 19 inspired him to pursue a career in meteorology. He described how his research has focused on improving forecasts to give people more time to find shelter from storms and noted he founded a weather technology company based on that work.

Droegemeier offered three examples of areas he will focus on if confirmed as OSTP director: coordinating the federal R&D portfolio, helping produce a diverse STEM workforce through a “framework” that spans all education levels, and supporting “new models” for public-private partnerships that can translate research into the marketplace.

Droegemeier also testified that there are “an increasing number of threats to science and technology in America,” citing as examples “unnecessary regulatory burden” on researchers and rising international competition, particularly from China. He elaborated,

China has the wealth and the expressed desire to challenge our longstanding leadership. We have to recognize that challenge but we also must embrace the value of collaboration. Global research is not a zero-sum game, and so all progress is valuable. But American leadership ensures that American values remain at the forefront of technological development.

During the question and answer session, Thune highlighted that China is projected to surpass the U.S. in R&D spending and asked Droegemeier what he would do at OSTP to help keep the U.S. ahead in strategic technology areas such as artificial intelligence and quantum computing. Droegemeier noted the office is already focusing on these subjects, pointing to their inclusion in the administration’s latest annual R&D budget priorities memorandum.

Asked by Sen. Cory Gardner (R-CO) about how to address competition with China, Droegemeier said OSTP can help monitor “predatory trade practices” through its membership on the Committee on Foreign Investment in the United States (CFIUS). That panel is responsible for recommending whether the president should block particular foreign investments on national security grounds. Droegemeier said China has a “well-known history of stealing intellectual property, research results, and things like that.”

“As we welcome foreign researchers into the U.S. — I think historically they’ve been a very important and robust part of our enterprise — we have to do that with care,” he said. Underscoring the reality of the intellectual property theft, Droegemeier added, “I’ve been briefed by the FBI in my role as vice president for research at the [University of Oklahoma] and I can tell you — it’s happening. I’ve seen it happen. It’s a big threat to the U.S.”

Scientists must be protected from interference and harassment, Droegemeier stresses

Several senators asked Droegemeier to articulate his views on the role of science in policymaking and explain what he would do to ensure federal scientists are safeguarded from political influence. Kicking off the discussion, Thune asked what he thinks is the “appropriate role of science in guiding policy.” Droegemeier replied,

I believe science is extremely important in informing policy. I think science needs to be conducted free from political interference. The science has to lead the way in terms of telling us whatever the facts are.

He said his role as OSTP director would be to “make sure that those scientific results, unbiased, are presented to the president and others for effective decision-making.”

Nelson also asked Droegemeier about the recent National Academies report on preventing sexual harassment of women in academia. Droegemeier pointed to the report’s identification of best practices for research institutions as an important contribution and also said NSF’s recent actions to strengthen its stance against sexual harassment are “extremely important.” He said OSTP could use what NSF did as a model and “promulgate it throughout all the agencies that do R&D.”

Droegemeier also fielded several questions about protecting science from political agendas in the context of climate research. Pressed by Sen. Ed Markey (D-MA) on his commitment to protecting federal climate scientists from punishment and intimidation by the administration, Droegemeier reiterated his view that “science must be conducted without political influence.”

Asked by Sen. Ted Cruz (R-TX) if he believes there is “only one acceptable or permissible view when it comes to issues of climate,” Droegemeier replied,

Science rarely provides immutable answers about anything. We thought we understood the atom. Now there are quarks and subatomic particles. So we have to, I think, be open and inclusive to all points of view. I think science is the loser when we tend to vilify and marginalize other voices. I think we have to have everyone at the table talking about these things and let the science take us where it takes us.

Cruz then referred to a 2016 hearing at which he presented satellite measurement data he said showed there had been no statistically significant global warming over the past 18 years. Asked if he had seen this data, Droegemeier said he is “familiar with some of the studies,” but added, “I don’t study climate personally.”

However, Droegemeier did outline his views on promising frontiers in weather and climate research. Asked by Nelson about how he would focus extreme weather mitigation research, Droegemeier said improving the communication of the threats is often overlooked. He pointed to a hurricane research strategy he helped craft that identified how social and behavioral sciences could contribute to improving weather warnings.“We have to understand that people dimension as well,” he emphasized.

Pressed by Sen. Tom Udall (D-NM) on what specific actions he would take on climate as OSTP director, Droegemeier said bringing the weather and climate modeling communities together would be fruitful given the complementarity of the disciplines. Weather modelers could help reduce uncertainty in climate models, Droegemeier said, while extending weather models into seasonal timescales would enable better decision-making about agriculture. “There’s a real symbiosis there,” he concluded.