President-elect Biden announced key picks for public health positions in his administration yesterday and will soon build out his climate policy team. 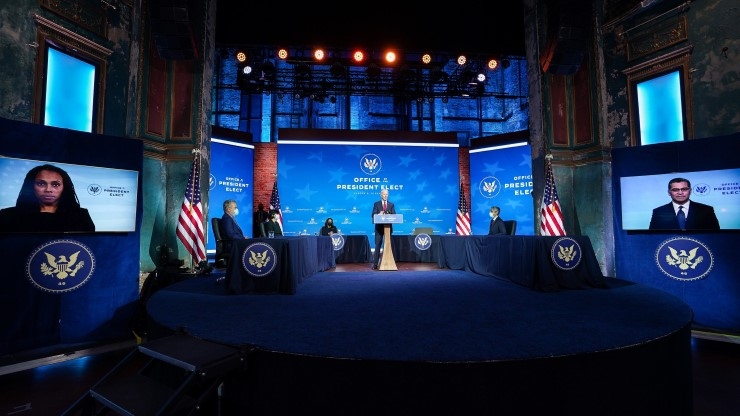 President-elect Biden announced his picks for core public health positions yesterday at an event in Delaware.

Amid the largest surge of COVID-19 cases in the U.S to date, yesterday President-elect Joe Biden announced picks for key public health roles to lead his administration's coronavirus response. They include replacements for the current heads of the Centers and Disease Control and Prevention and Department of Health and Human Services, as well as picks to lead the White House COVID-19 response and a new equity task force. Biden also outlined COVID-19 policy priorities for the first 100 days of his administration, which focus on increasing mask wearing, distributing vaccines, and reopening schools more safely.

In parallel, Biden has begun to build out a leadership team for another of his top priorities, climate change. Last month he announced that former Secretary of State John Kerry will serve as a special presidential envoy for climate, a new position that will have a seat on the National Security Council. Biden is also expected to name a high-level White House coordinator for domestic climate policy this month and to prioritize climate expertise in his selections for energy and environment agencies, such as the National Oceanic and Atmospheric Administration.

Biden debuted his health team picks at an event near his transition office in Wilmington, Delaware, at which each delivered brief remarks.

Rochelle Walensky, chief of infectious diseases at Massachusetts General Hospital and a Harvard Medical School professor, will lead the Centers for Disease Control and Prevention, a role that does not require Senate confirmation. Walensky has focused her research on HIV/AIDS policy and interventions in resource-limited settings. In accepting the role, she drew parallels between her experience as a medical student witnessing the devastation of the AIDS epidemic with what she is seeing now with COVID-19 patients. She will replace current CDC Director Robert Redfield.

Jeffrey Zients, a director of the National Economic Council under President Obama, will serve as the White House’s COVID-19 response coordinator, another position that does not require Senate confirmation. During the Obama administration, he also served as deputy director of the Office of Management and Budget and led the 2013 “tech surge” to fix issues that plagued the rollout of HealthCare.gov.

Xavier Becerra, currently California’s Attorney General, will be nominated to be secretary of health and human services, making him the first Latino tapped to lead the department. A lawyer and former member of Congress, Becerra has been a leading critic of the Trump administration’s efforts to unravel the Affordable Care Act, organizing a multi-state suit to defend the law. Becerra was the chair of the House Democratic Caucus from 2013 to 2017, when the California governor appointed him attorney general after Kamala Harris vacated that role to take her seat in the Senate. Becerra would replace current HHS Secretary Alex Azar.

Vivek Murthy, a physician who served as surgeon general from 2014 to 2017, will be nominated to return to the role with a broader portfolio. Murthy is one of three co-chairs of Biden’s COVID-19 Advisory Board. At the announcement event, Murthy emphasized that Americans are facing multiple health crises in parallel with the pandemic, including opioid addiction, mental health stresses, and racial disparities. “In my new, expanded role, I will work to bring a health perspective to our policies across government so that our schools, workplaces, and communities can be forces for strengthening our health and well being,” he said. Murthy would replace current Surgeon General Vice Adm. Jerome Adams.

Marcella Nunez-Smith, another co-chair of the COVID-19 Advisory Board, will chair a newly created COVID-19 Equity Task Force. In describing the role, Biden said Nunez-Smith will “lead our efforts to provide care to the communities most in need and most affected by the pandemic and most often overlooked.” She is currently a Yale University public health professor and founding director of the Equity Research and Innovation Center.

Anthony Fauci will continue as director of the National Institute of Allergy and Infectious Diseases, a role he has had since 1984, when he first rose to prominence during the AIDS epidemic. He will also serve as “chief medical adviser” to Biden on COVID-19.

At the event, Biden outlined his initial plan for addressing COVID-19, which he said was developed in consultation with Fauci. He said it will include an executive order to “require masks where I can — like federal buildings and interstate travel on planes, trains, and buses.”

Committing to carry out at least 100 million vaccinations within the first 100 days of his administration, Biden called on Congress to pass legislation immediately to increase support for vaccine rollout, referencing a bipartisan proposal that is part of a new pandemic relief package currently up for debate.

“Without urgent action this month by Congress to put sufficient resources into vaccine distribution and manufacturing — which the bipartisan group is working on — there is a real chance that, after an early round of vaccinations, the effort will slow and stall,” he said. 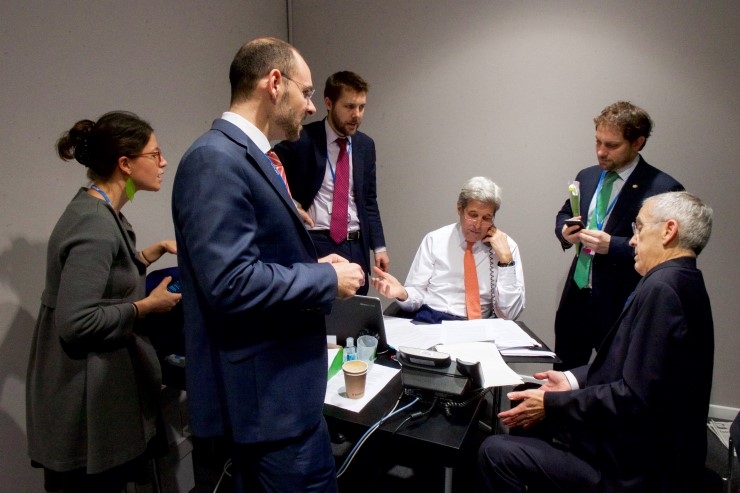 John Kerry’s selection as climate envoy marks a return to the Obama administration’s emphasis on mitigating climate change. The former Democratic senator and 2004 presidential nominee made climate change a major priority when he served as Obama’s secretary of state from 2013 to 2017, including as the leading U.S. representative at the 2015 conference that negotiated the Paris Climate Agreement. Biden has committed to rejoin the agreement as one of his first acts as president.

Since leaving office, Kerry has continued to advocate on the subject and has called for the U.S. to recommit to Mission Innovation, an initiative announced in conjunction with the Paris conference through which the U.S. and 19 other countries each pledged to double their spending on clean energy R&D over five years. In addition, Kerry has endorsed a recent report urging the U.S. to roughly triple federal funding for energy innovation to $25 billion per year by 2025.

Biden has also emphasized climate credentials in his selection of Brian Deese as director of the National Economic Council. Deese, currently the global head of sustainable investing at financial giant BlackRock, worked as a top aide to Kerry during the negotiations over the Paris Agreement. Announcing the pick, Biden remarked, “He’ll be the first [National Economic Council director] who is a true expert on climate policy. If we are going to tackle the climate crisis, then solutions must be woven into every aspect of our economic policy.”

As the Biden transition gains steam, a number of science agency picks could be announced sooner rather than later.

Speaking on a panel at the American Geophysical Union annual meeting last week, John Podesta, who led President Obama’s transition team in 2008 and later served as a climate policy adviser in the White House, explained Obama's decision to name some science appointments before the inauguration.

“One of the things I think we pulled off in the Obama transition was to put a spotlight on personnel by doing a simultaneous announcement of John Holdren, Eric Lander, Steve Chu, and Jane Lubchenco, to put a spotlight on the fact that Obama respected science [and] was going to elevate it in decision making," Podesta said, referring to Obama’s picks to lead the White House Office of Science and Technology Policy, President's Council of Advisors on Science and Technology, Department of Energy, and the National Oceanic and Atmospheric Administration, respectively.

Podesta also offered predictions for early Biden actions in science policy, which he said may include an executive order on scientific integrity and science-based decision making. He added the new administration will tap “top tier scientists” to work at OSTP and use the office to “identify major cross-cutting issues in climate science, in biomedical science, and bioinformatics.”

On climate science specifically, Podesta predicted the administration will update the social cost of carbon metric and work to strengthen the federal science workforce, “with a specific focus on where people have really been marginalized in the climate sciences.” He continued that he envisions the administration will “elevate” the U.S. Global Change Research Program, which oversees the National Climate Assessment, and “reprioritize” Earth science at NASA.

Podesta concluded by predicting the administration will propose “doubling or even tripling scientific R&D, particularly aimed at climate and hard-to-decarbonize sectors that are really in need of more scientific research as well as policy action.”