At a meeting this month, top officials at the National Institute of Standards and Technology provided insight into how they are grappling with the possibility of deep budget cuts while also seeking to better situate the measurement science and standards agency for the future.

At the June meeting of the Visiting Committee on Advanced Technology (VCAT), the National Institute of Standards and Technology’s main advisory body, top agency officials and advisors grappled with how best to situate the measurement science and standards agency for the future while planning for the possibility of deep budget cuts. 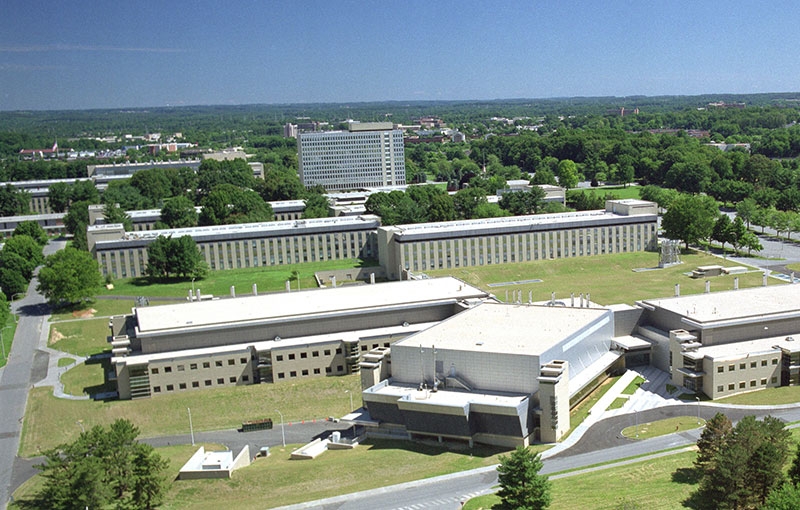 In contrast to the Manufacturing Extension Partnership program, which the administration directed NIST to end, Rochford said the agency had considerable latitude in proposing which programs to cut in order to achieve a 13 percent overall reduction to its laboratory programs.

Rochford described how he and the lab directors established a set of prioritization criteria that applied cuts more heavily to external grant programs, activities that have reached technological maturity, projects that have less need for NIST’s leading-edge measurement science capabilities, and projects that would have insufficient resources to support a critical mass of effort.

As an example of a program NIST proposed to end based on these criteria, Rochford pointed to the dissemination of time synchronization signals for certain commercial products as an activity that has become a “pure service.”

A table from Rochford’s presentation that summarizes the proposed cuts to lab programs.

Rochford noted that the Special Programs Office, which manages various intramural programs and grants, would see significant reductions, but also said that technical work in the program subject areas would continue. “We essentially chose to decrease central management of some intramural programs and use the money for science,” he said.

As for NIST’s research facility construction account, Rochford emphasized that modernization of the Radiation Physics Building in Gaithersburg, Maryland — estimated to cost $322 million over the fiscal years 2016 to 2024 — may limit resources for maintenance at other facilities. Under the fiscal year 2018 request level of $104 million for facility construction, NIST anticipates the backlog of deferred maintenance will grow from its current level of $364 million.

Asked if the budget makes room for new, innovative activities, Rochford replied that it preserves support for the Innovation in Measurement Sciences program, a strategic initiative fund, and lab-level strategic reserves.

The instructions that we got from Kent [Rochford] at the lab level were: ‘If you’re faced with a choice of reducing capabilities broadly, or reducing the scope of your laboratory’s activities but actually strengthening the things that you preserve, do the latter every time.’

The VCAT audience was sympathetic to NIST’s budgetary dilemmas. They have argued in recent years that the growing scope of NIST’s responsibilities and the state of its infrastructure warrant significant budget increases.

In a 2016 report, VCAT recommended that NIST’s research budget increase by about 10 percent per year until it reaches a base level of approximately $1 billion in order to “accommodate increased demand for measurement science solutions in existing and emerging technology areas.” VCAT also recommended in the report that the facility maintenance budget increase to a base level of $107 million per year.

At the meeting, VCAT members offered ideas on how NIST can navigate the current budget climate. The attendees also discussed why NIST does not attract as much attention as other agencies and how to raise its profile. Drawing on her experiences as a former director of the National Science Foundation, Colwell offered her take:

The joke is that the reason we don’t do so well, or NSF for that matter, is because nobody ever died of physics. … But it’s frankly true that if you don’t have the measurements and the instrumentation that’s used in healthcare, people do die of physics.

Colwell urged NIST to do more to communicate its role and impacts. “I think it’s time to not be so shy,” she concluded.

After the budget discussion, Laurie Locascio, the acting associate director of NIST’s laboratory programs, outlined the agency’s effort to develop a new strategic plan for its labs as required by a provision in the recently enacted American Innovation and Competitiveness Act. The plan will identify high-level priorities to guide NIST’s investments over the next 10 years.

Locascio observed that although NIST already does a significant amount of strategic planning at the lab level and produces three-year programmatic plans, the new effort will produce the first agency-wide, long-term strategic plan since 1981.

So far, the planning group has identified an initial set of potential growth areas. These include “vertical” capabilities: bioscience, quantum science, and Internet of Things; as well as “horizontal” ones: artificial intelligence, systems-level thinking, and democratization of measurement.

The presentation sparked a discussion of how NIST currently decides to invest in new areas. One VCAT member asked what criteria NIST uses to accelerate or decelerate investment in programs and if NIST had ever invested prematurely in certain areas.

“We’ve actually never had the problem, typically, of being too early, frankly. We’re just not that lucky,” Rochford replied, adding, “So what we try to do is have some stable base that we can jump from.”

The places where we’re trying to catch up are often the places where we’re trying to apply our expertise in measurement and metrology, where we have a capability and we’ve become aware of a need in industry. And then we try as quickly as possible to apply our expertise to that problem. In point of fact, we — generally speaking, in the area of measurement science — we almost always lead. We’re doing measurements now that nobody knows what they’re good for yet, but we’re confident that they will.

One subject NIST will be grappling with over the coming years is cybersecurity. NIST’s role in this sphere grew significantly after President Obama tasked NIST in 2013 with developing a voluntary framework for strengthening critical infrastructure cybersecurity. There is also interest in Congress in further expanding NIST’s role. The House Science Committee has approved controversial legislation that would task NIST with auditing the cybersecurity preparedness of federal agencies.

Although proud of their contributions, which have been highly praised by industry, NIST has become wary that increasing responsibilities in this domain could divert resources from other programs. Given the scope of the cybersecurity challenges facing the nation, Rochford observed at the meeting that if NIST were to become the “National Institute of Cybersecurity,” it could expend all its current resources tackling the subject.

And to convey the challenge of keeping up with developments in information technologies, Romine, who oversees NIST's cybersecurity efforts, drew on a famous line from the Red Queen in Alice’s Adventures in Wonderland, “‘My dear, here we must run as fast as we can just to stay in place. And if you wish to go anywhere you must run twice as fast as that.’ That’s the world I live in.”