The House Science Committee held a two-day hearing last week to investigate the recent delays that will cause NASA’s James Webb Space Telescope to breach its statutory cap on development costs. The hearing explored ways of increasing contractor accountability and the implications JWST’s troubles will have for NASA’s other science missions.

It is truly staggering to behold how this space telescope’s cost and schedule projections went from costing the same as a space shuttle mission — around half a billion dollars with an original launch date in 2007 — to now becoming an expenditure exceeding $9 billion with a new launch goal in March 2021. This is 19 times the original cost and a delay of 14 years. It doesn’t get much worse than that.

The goal of the hearing was to probe JWST’s most recent schedule delays, which an independent review board (IRB) recently determined will cause the mission to breach its $8 billion cap on development costs by an estimated $800 million. Congress instituted the cap in 2011 after NASA’s early estimates of the telescope’s cost and launch date slipped repeatedly.

JWST adhered to its new cost and schedule baseline until last year, when NASA first announced a launch delay stemming from difficulties during the telescope’s integration and testing (I&T) by its prime contractor, Northrop Grumman. Now, with confirmation of the cost cap breach, Congress must raise the cap and give NASA the go-ahead to complete the mission.

Science Committee members affirmed their support for the mission’s completion, while seeking ways to ensure that NASA’s contractors are accountable for their performance. The committee also examined the effects the cost overrun could have on NASA’s mission portfolio and what broader lessons can be learned from the JWST experience.

Bridenstine and Young review errors at root of the breach 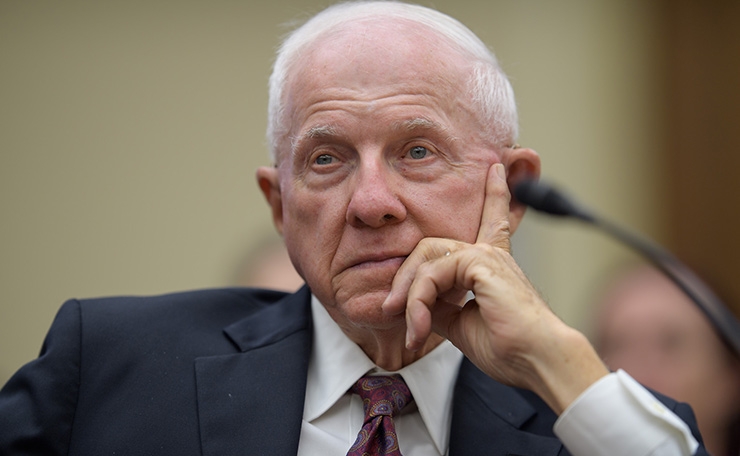 Retired aerospace executive Tom Young chaired the independent review board that investigated the errors that have caused new delays in the launch of the James Webb Space Telescope.

Summarizing the IRB’s report, Young said the latest delays are attributable to human errors and “embedded problems,” meaning cases in which problems caused by earlier errors do not manifest for months or years.

Young cited three human errors at Northrop Grumman that had a major impact on JWST’s progress: the use of an improper solvent to clean propulsion valves, improper testing of wiring, and improper fastening of JWST’s sunshield cover resulting in screws and nuts coming loose during acoustic testing. He noted the problems with the valves and fasteners were also examples of embedded problems in that critical mistakes had remained undetected for some time.

Young said NASA and Northrop Grumman would need to conduct an “in-depth audit” of JWST’s engineering to ferret out any additional, undiscovered embedded problems. He also said that workforce capabilities and procedures “must be such that human errors are minimized, and when they occur their impact is negligible.”

Stressing that NASA should follow all 32 recommendations made in the IRB report, Young pointed out that the latest cost and schedule estimate assumes no further major problems. He remarked,“No allowance has been made for additional I&T errors or embedded problems with multi-month impacts, additional sunshield deployments during I&T beyond the currently planned two, or removal of the spacecraft subsystem or science instrument.”

Bridenstine affirmed that NASA will implement all the IRB recommendations and reported that NASA is increasing the number of its own personnel on-site at Northrop Grumman. He also acknowledged that NASA bears some responsibility for some of the errors, noting it had not specified torque requirements for the sunshield fasteners. “We can blame the contractor, but the reality is it’s on us to have mission success,” he said.

In his former role as a congressman, Bridenstine served on the Science Committee and devoted considerable attention to the troubled weather satellite programs overseen by the Defense Department and National Oceanic and Atmospheric Administration. His former colleagues expressed no reservations about his ability to confront the JWST situation.

Smith said Bridenstine “began his job with our high expectations, and he has already exceeded them,” adding, “Jim, that’s the highest compliment I can pay you.”

Over both days of the hearing, Smith emphasized the need for more contractor accountability and expressed frustration that contractors seem to face few repercussions for poor performance.

Asked by Smith whether Northrup Grumman would cover the $800 million cost overrun, Bush replied that accepting full financial responsibility for the overrun would “significantly impede and impair the relationship between NASA and Northrop Grumman.”

Later, closing out the hearing, Smith pressed Bush on what the company’s latest annual profit was “to the nearest billion,” and whether it had fired any employees over the errors on the JWST project. In reply, Bush declined to report a profit number on the spot and said he was unaware of any firings but would not confirm that none had occurred.

In an earlier exchange with Smith, Bridenstine explained that Northrop Grumman’s contract entitles it to award fees that represent its profit on the project. He said the company had already lost some award fees and that it can still earn about $30 million in fees during JWST’s commissioning. On the second day, Bush indicated that Northrop Grumman had already agreed with NASA it would make its retention of fees earned to date as well as all future fees contingent on JWST’s successful demonstration in space.

Several other exchanges during the hearing focused on how NASA can improve the structure of its contracts and the bidding process. Young suggested that, to avoid entertaining bids offering a “lowest credible cost,” NASA should establish a “most probable cost” before inviting bids and set criteria for awarding contracts so as to attract bids that emphasize good performance.

However, both Young and Bush observed that the complexities and unprecedented nature of missions such as JWST make it unreasonable to offer fixed-cost contracts for them.

While the budget NASA had planned to use for JWST’s post-launch operations will cover part of the $800 million cost of the delay, the agency currently estimates it will require almost $500 million in additional funds across fiscal years 2020 and 2021.

Bridenstine said Congress could appropriate additional funding to avoid disrupting NASA’s other missions or require NASA to reallocate funding from within its budget. Pressed by Rep. Mo Brooks (R-AL) to commit to not taking funds from human space exploration activities, Bridenstine replied that the JWST situation is “relevant to the Science Mission Directorate exclusively.”

Bridenstine also observed that NASA’s development of the Wide Field Infrared Survey Telescope (WFIRST) had presumed a timely launch of JWST. He continued,

After JWST, WFIRST is the next large mission that NASA’s Astrophysics Division is developing, with a target lifecycle cost of $3.2 billion. While that telescope is currently anticipated to launch in the mid-2020s, the Trump administration has proposed cancelling it and diverting part of its budget to human space exploration. Meanwhile, House and Senate appropriators have both advanced spending bills that include funding for WFIRST to continue, though they did so before NASA announced that JWST would require additional funding.

While it seems certain that Congress will see JWST through to launch, it remains unclear whether the telescope’s troubles will delay or derail WFIRST or other missions that are also following in its wake.