An advisory panel has recommended that the Department of Energy immediately begin preparing to replace the pressure vessel of the High Flux Isotope Reactor and convert the facility to use low-enriched uranium fuel. It also recommends commencing studies that could lead to a new research reactor. 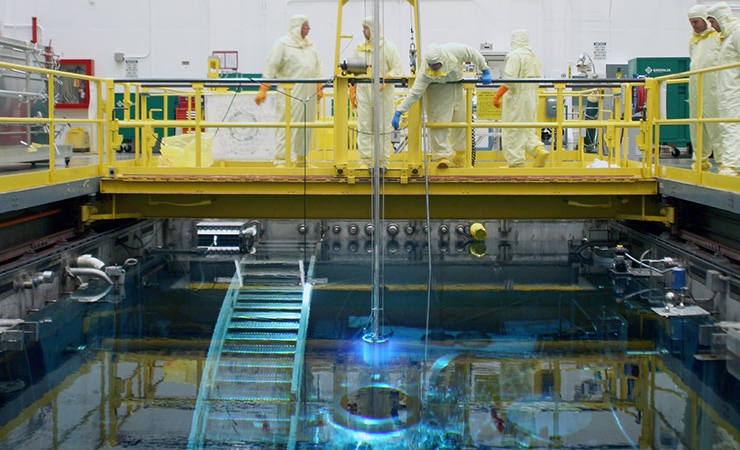 This summer, the Basic Energy Sciences Advisory Committee (BESAC) completed a report for the Department of Energy on the scientific value of U.S. high-performance research reactor facilities. Its principal recommendation is that DOE “immediately” begin preparing to overhaul the High Flux Isotope Reactor (HFIR) at Oak Ridge National Lab.

HFIR is an important center for radioactive isotope production and is one of two U.S. government reactors used for neutron scattering research, alongside a facility operated by the National Institute of Standards and Technology. Although HFIR could potentially operate several more decades without a major renovation, the report spotlights an upcoming opportunity to simultaneously replace the reactor’s pressure vessel, implement upgrades, and convert it to employ low-enriched uranium (LEU) fuel.

In recommending an early overhaul, the report also points to a risk that the lifetime of HFIR’s pressure vessel could prove shorter than anticipated. To hedge against the unexpected possibility the facility might be shut down altogether at some point, the report further recommends beginning early exploratory work for a new research reactor, citing a decades-long lead time needed to bring one into operation.

Case made for prompt overhaul

At more than 100 pages, BESAC’s report is styled as a reference resource beyond any role it may play in informing near-term decisions. It reviews in detail the various applications of scattering experiments that use reactor-produced neutrons to probe biological and material structures. The report further explains how that work complements similar experiments at X-ray light sources and at facilities that produce neutrons by bombarding heavy metals with accelerated protons, such as Oak Ridge’s Spallation Neutron Source.

In addition, the report discusses HFIR’s important role in producing isotopes for medical, industrial, and scientific applications, including some for which it is the world’s only supplier, such as actinium-227, which is used to treat advanced cancers. The report also surveys HFIR’s other uses, such as for testing how materials degrade when irradiated and producing antineutrinos that physicists study to better understand fundamental particle interactions.

Reviewing HFIR’s 55 year operating history, the report notes the reactor was originally designed to produce transuranic isotopes and was only later outfitted to function primarily as a neutron scattering user facility. The report also relates how in the mid-1980s it was discovered that radiation exposure was causing HFIR’s pressure vessel to become embrittled faster than expected. To address this issue, the facility has since operated at 85 megawatts instead of its design power of 100 megawatts.

Although the vessel is currently predicted to last up to another 40 years, the report notes such estimates could prove too optimistic. When presenting the report to BESAC in July, Birgeneau remarked, “I tend to be a pessimist on these items and the pressure vessel could suddenly develop a crack next week. It’s not impossible.”

Given the uncertainty of HFIR’s lifespan, the report argues it is inadvisable to invest in new instrumentation, stating it would in any case “fall far short” of the neutron science community’s needs absent accompanying modifications to the pressure vessel design. Accordingly, it recommends replacing the vessel sometime between 2030 and 2035, which would rejuvenate the reactor and offer an opportunity for more ambitious upgrades.

Specifically, such a renovation would permit the reactor to resume operating at 100 megawatts and allow construction of a new beam guide hall with instruments tailored to upgraded reactor capabilities. The expanded capacity would also help alleviate excess user demand at all U.S. neutron scattering facilities, which the report notes has in recent years outstripped available time by a factor of about two to three.

The upgraded reactor would also have increased capacity for isotope production and irradiation testing. In addition, it would allow for the installation of equipment specialized for fundamental physics research, enabling more systematic work than is currently possible with the “creative and opportunistic” experimental setups physicists have used at HFIR.

“A dedicated fundamental physics laboratory at an upgraded HFIR or a new reactor could have a transformative impact on the field of fundamental physics and the synergistic and collaborative efforts of scientists within the [DOE] Office of Science,” the report asserts.

The report’s recommendation to renovate HFIR in the early 2030s is linked to DOE’s goal of converting it from highly enriched uranium (HEU) fuel to LEU within that timeframe. Since 1978, the U.S. has sought to phase out HEU in research and isotope-producing reactors because, containing a high density of the highly fissionable isotope uranium-235, it could be stolen and adapted for use in a nuclear weapon.

HFIR, notably, employs HEU that is about 90% uranium-235 and the reactor’s fuel elements need to be replaced about once every two months. However, like many reactors optimized to use HEU, HFIR has yet to be converted because it has a compact design that cannot readily accommodate the larger volumes of LEU needed to meet performance requirements.

Oak Ridge recently completed a study, included as an appendix in the report, which concludes HFIR can be converted to employ uranium silicide dispersion fuel that would comprise just under 20% uranium-235 and therefore qualify as high-assay low-enriched uranium. The report endorses this proposal, noting it is expected to preserve all of HFIR’s current capabilities.

At present, preliminary studies are underway to develop a firm plan for a reactor overhaul, and the report specifically recommends conducting a study to establish whether a pressure vessel replacement will enable a more economical fuel configuration. After additional design, the report estimates that three to five years would be needed to fabricate a new pressure vessel before it is installed at the same time as the LEU conversion. 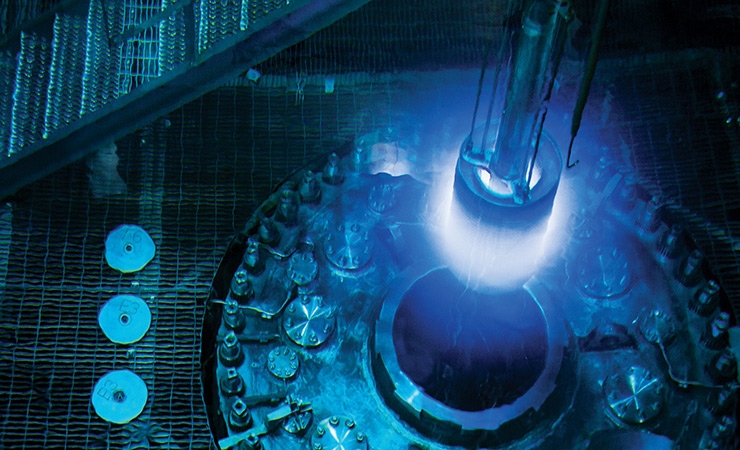 New reactor regarded as a fallback

While the report focuses on its recommendation to overhaul HFIR, it also advocates conducting a parallel “scoping study” for building a new reactor facility with a design optimized for LEU fuel. Framing the project as offering a contingency option, it states,

A new research reactor is likely to take several decades from initial design through approval, construction, and commissioning. Beginning the process now will allow time to evaluate options and proceed with planning and approvals in time to ensure continuing availability of a multiply capable high-flux research reactor in the U.S.

Birgeneau pointed out in July that the report does not recommend a new reactor necessarily be built, but he emphasized that if HFIR were ever to shut down it would be “devastating.” Warning such an event is not unthinkable, he recalled his shock over the closure of Brookhaven National Lab’s High Flux Beam Reactor in 1999 after it was discovered to have leaked small amounts of radioactive tritium into the ground.

“I could not have imagined that Alec Baldwin and Christie Brinkley would play an important role in removing this capability from the United States,” he remarked, referring to how celebrity activism and media attention appeared to have helped sway government decision-making on the matter.

“So, things as crazy as that can happen,” he continued, stressing, “In the view of our committee, the one situation which would not be acceptable is, if for some reason unknown at this time HFIR had to be closed down, we did not have a detailed plan for a next-generation high-flux reactor.”

The BESAC report is not the only study to suggest building a new research reactor in the U.S. In 2018, a review of NIST’s reactor, which is almost as old as HFIR, recommended beginning planning for a replacement. Even before that, NIST Director Walter Copan told the agency’s main advisory committee he had begun discussing the prospect of a “national study” of a new reactor with DOE, the National Science Foundation, and the National Academies.