US Ramps Up Planning for Space Nuclear Technology

NASA and the Department of Energy are expanding their collaboration as part of a broader White House push to develop nuclear power systems for space applications. The initiative comes as NASA faces key decisions on what fuel sources and technology development paths to pursue. 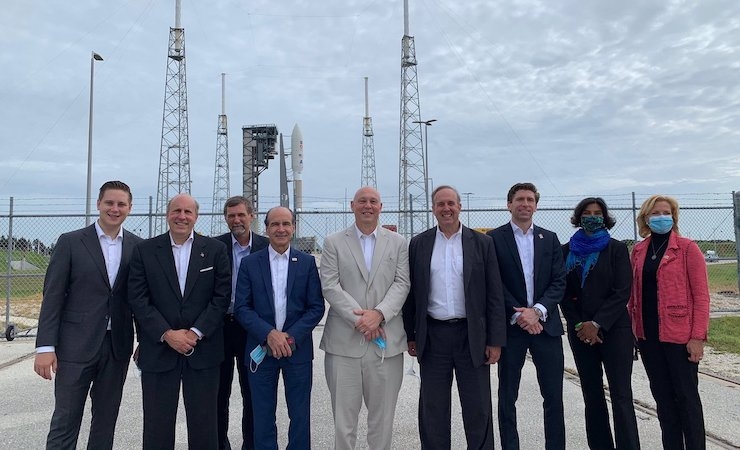 As NASA launched its Perseverance rover to Mars yesterday, senior officials from the Department of Energy were at Cape Canaveral to see it off. Perseverance is the first mission to launch since the Curiosity rover in 2011 that is powered by the radioactive isotope plutonium-238, which is manufactured in DOE facilities.

Now, NASA, DOE, and the White House want nuclear power to play a much larger role in space exploration as plans take shape for a sustained human presence on the Moon and subsequent crewed journeys to Mars. During their trip, the DOE officials met with representatives from NASA at Kennedy Space Center to launch a new working group that aims to facilitate R&D on new space technologies, including ones powered by nuclear fission rather than radioactive decay.

NASA is currently debating tradeoffs between different surface power and propulsion methods and is looking for commonalities with reactor designs under development by DOE and the Department of Defense. NASA must also decide whether it will use highly enriched uranium (HEU) or a less-enriched variant as a fuel. Although HEU has certain advantages, such as its high power density, non-proliferation advocates argue its use would undermine longstanding U.S. efforts to limit applications of the material, which can be adapted for use in nuclear weapons.

The White House National Space Council released a strategy for deep space exploration on July 23 that identifies DOE as “critical” to the development of nuclear power and propulsion technologies. It notes that NASA plans on developing a power reactor that could provide electricity for a surface Moon base and is exploring nuclear propulsion methods that would significantly cut down travel time to deep-space destinations.

The director of civil space policy at the National Space Council, Ryan Whitley, elaborated on the administration’s work to promote nuclear technology development across agencies at a symposium convened this month by the American Astronautical Society.

Whitley said NASA’s “immediate need” is for a surface fission reactor that enables long-duration lunar exploration, since current systems based on radioisotope decay cannot provide enough power for larger missions that must operate through the lunar night or within shadowed craters. He added that nuclear propulsion is a longer-term priority, given its ability to enable eventual missions to Mars and beyond.

NASA and the National Nuclear Security Administration have already tested a surface reactor through their joint Kilopower project, which is developing a system to provide up to ten kilowatts of electric power for crewed planetary bases. For propulsion technologies, NASA initiated a Mars Transportation Assessment Study in October through which it is evaluating the merits of nuclear thermal propulsion (NTP) versus nuclear electric propulsion (NEP). Both use a nuclear reactor to generate heat, which NTP systems use to expel gas, while NEP systems convert the heat into electricity then thrust.

Whitley said one of the administration’s near-term goals is to establish a capacity for producing high-assay low-enriched uranium (HALEU) that could be used as fuel for a range of agency missions. HALEU is enriched to contain between 5% and 20% of the isotope uranium-235 by weight, and last year DOE announced plans to establish a domestic supply line for the fuel, citing demand from designers of next-generation commercial power reactors. NASA is now exploring HALEU as an alternative to HEU, which it used in the Kilopower test.

Whitley said the administration is likewise looking to leverage commonalities between reactor designs under consideration by NASA and the Department of Defense. The council’s report highlights Project Pele, which is designing mobile reactors to power military bases, and DARPA’s DRACO program, which aims to develop spacecraft that can maneuver quickly in the region between the Earth and the Moon.

While DARPA is pursuing an NTP design through the DRACO program, NASA has not settled on a particular propulsion technology. Asked at the symposium about the choice between NTP and NEP, Whitley declined to weigh in directly given NASA’s ongoing deliberations on the subject.

“There's pluses and minuses to both, and so it's not easy necessarily to make a clean decision there,” he said. 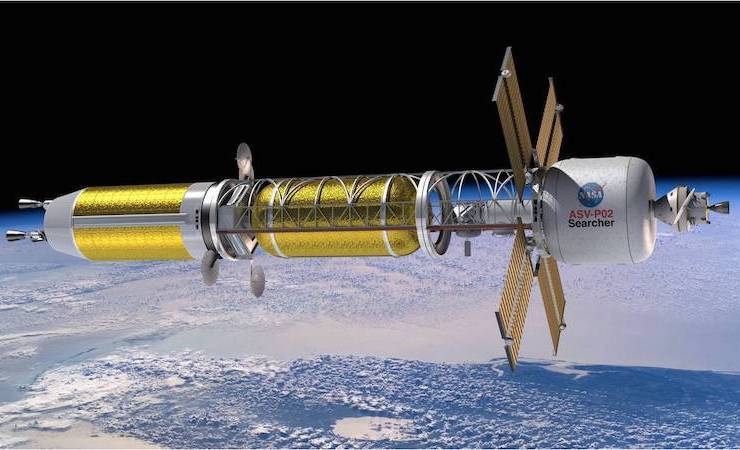 A design concept for a spacecraft using nuclear thermal propulsion.

To aid its decision-making, NASA has commissioned a National Academies study committee to assess the tradeoffs associated with NEP and NTP, as well as considerations arising from the use of HEU versus HALEU. Jim Reuter, head of NASA’s Space Technology Mission Directorate, told the committee at its kickoff meeting in June that the study is not meant to focus on policy matters, except when it comes to considerations associated with the fuel choice.

In recent years, Congress has prioritized NTP development, which is led by Marshal Space Flight Center in Alabama. In fiscal year 2020, it provided $110 million specifically for NTP, of which at least $80 million was to prepare for performing a flight demonstration by 2024.

Reuter said NASA has requested that in future appropriations Congress instead target a demonstration in the late 2020s and not specify that all the funding must go toward NTP. He explained that recent studies are leading the agency to consider “looking much more strongly” at NEP and that it wishes to focus on surface power in the near term.

However, the House has proposed that NASA instead press ahead with NTP, again including $110 million for its continued development in pending appropriations legislation for fiscal year 2021. In their report accompanying the legislation, House appropriators note they have not yet received a plan they mandated from NASA on a path toward performing an NTP flight demonstration by 2024. The Senate has not yet released its NASA spending legislation for the year. 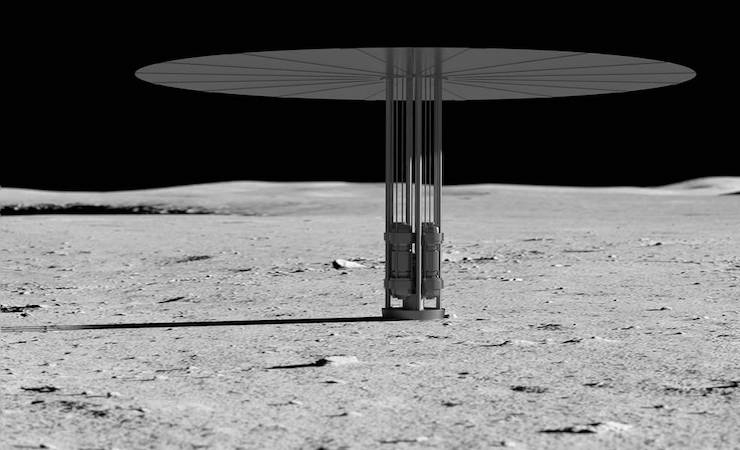 An artist’s rendering of a Kilopower fission reactor on the Moon.

As NASA has moved forward with its propulsion and Kilopower projects, non-proliferation advocates have taken issue with NASA’s continued interest in using HEU.

The American Nuclear Society hosted a debate on the topic at its annual meeting in June. While the society has generally supported the use of space nuclear power and propulsion in the past, it has decided to develop a position statement by spring 2021 on whether to favor the use of LEU.

Among the participants was Rep. Bill Foster (D-IL), a former Fermilab physicist, who argued that proceeding with HEU would set a dangerous precedent. “If all of the spacefaring nations start using HEU reactors in space, then this would involve utilization of a significant amount of weapons grade material,” he remarked. Conversely, he continued, if the U.S. develops an LEU-based design, it could become a “de facto standard.” Foster also suggested the high costs of security measures associated with handling HEU could outweigh the advantages of using the material.

Alan Kuperman, a policy scholar affiliated with the Nuclear Proliferation Prevention Project, pointed to U.S. efforts since the 1970s to minimize the use of HEU in civilian applications, arguing they are “based on the logic of no exceptions.”

Among those advocating in favor of HEU, Kilopower chief reactor designer David Poston said that in his experience regulators were most concerned with a criticality accident resulting in a high-yield event, which he said HEU systems tend to mitigate. Len Dudzinski, NASA’s program executive for radioisotope power systems, also said that LEU reactors are not powerful enough for certain potential missions, such as burrowing through thick ice sheets on the moons of Europa or Enceladus.

Bhavya Lal, another panelist at the event and a member of the National Academies study committee, contended that choosing between HEU and LEU is ultimately a political decision rather than a technical one, and noted other countries may pursue HEU systems regardless of how the U.S. proceeds. She advocated for not adopting a blanket ban on the material.

“In my view, it would be prudent that we retain flexibility and allow the use of HEU in space systems only where the mission is not possible without HEU or where HEU is a significant enabler of mission scope or objective,” she said