In a new report on employment trends across federal science agencies, Democratic staff of the House Science Committee conclude some agencies have experienced significant “brain drain” over the past decade while others have expanded despite facing political pressures. 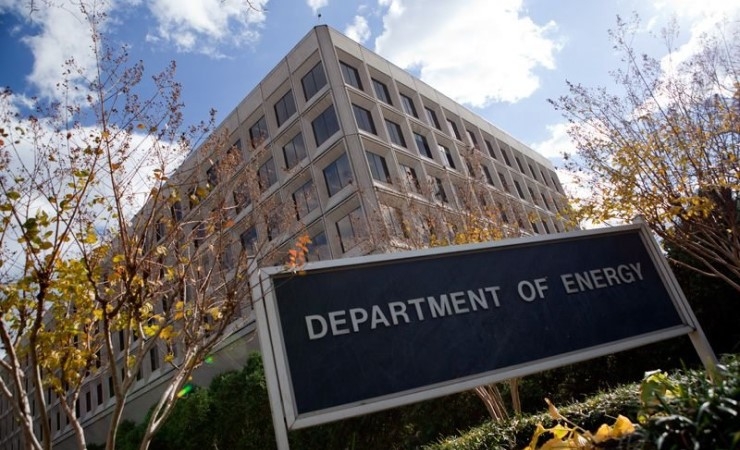 The headquarters of the Department of Energy.

The House Science Committee released a report this month that charts workforce levels at seven science agencies since 2009. Produced by Democratic committee staff, the report argues that some agencies have experienced substantial “brain drain” over the last decade, spotlighting staff departures at the Environmental Protection Agency and certain offices within the Department of Energy.

The report argues the trend of staff departures was exacerbated by the Trump administration’s “open hostility towards federal scientists and the federal workforce in general.” However, it also states that “no single narrative neatly captures the diverse range of employment trends,” noting that some agencies grew significantly despite “cross-cutting budgetary and political pressures.”

The report compiles data on the size of the agencies’ civil service workforces near the beginning and end of the Obama and Trump administrations. 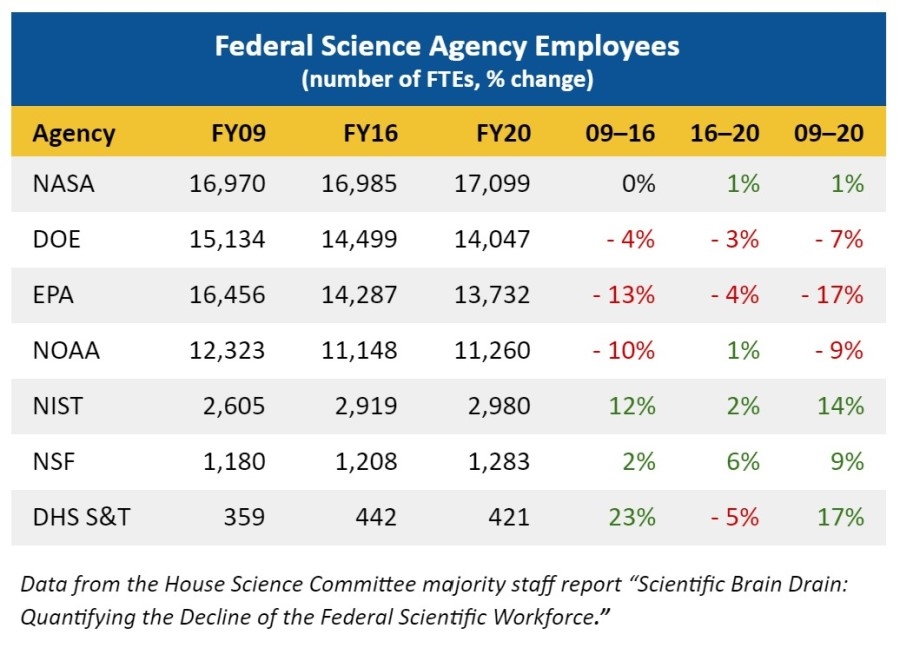 EPA faced the steepest losses among the agencies, with its civil service workforce declining 16.6% to 13,732 between fiscal years 2009 and 2020. The agency expanded early in the Obama administration, but faced sharp staff losses due to budget cuts resulting from the Budget Control Act of 2011.

Trends at DOE are more mixed. The department’s civil service workforce declined by 7.2% to 14,047 between 2009 and 2020, but DOE added about 11,000 contract employees over the same period. In contrast with other science agencies, contractors make up a large share of DOE’s workforce, including most of its national laboratory staff.

Among the civil service, the report notes several of DOE’s applied energy program offices experienced significant staff declines under the Trump administration, with the Offices of Nuclear Energy, Fossil Energy, and Energy Efficiency and Renewable Energy losing a combined total of 200 employees between 2016 and 2019. (The report does not include data specific to the DOE Office of Science.)

Meanwhile, the report finds that the National Science Foundation and National Institute of Standards and Technology significantly enlarged their staff and that NASA’s workforce size remained steady over the decade. The number of employees in STEM occupations at these agencies also increased, though the report argues the long-term trends for these agencies “mask a noticeable slowdown in STEM employment growth during the Trump era.”

The report concludes that Congress and the executive branch should take action to rebuild the federal workforce, including by strengthening scientific integrity policies and increasing agency funding.

“The loss of talented and experienced federal employees — scientists and nonscientists alike — threatens to deprive the federal government of vital institutional knowledge and expertise that took decades to develop and could require years to recover,” it states.

In conjunction with the report release, the Investigations and Oversight Subcommittee held a hearing to discuss the root causes of staff departures and to identify ways of improving the recruitment and retention of federal employees.

Subcommittee Chair Bill Foster (D-IL), a former Fermilab physicist, attributed the recent trends in part to the Trump administration’s “hostility towards evidence-based decision-making,” arguing that political interference sapped morale among agency scientists. Meanwhile, Subcommittee Ranking Member Jay Obernolte (R-CA) stressed that the workforce declines began early in the decade, saying, “I find that alarming, because that tells me that this wasn't an isolated incident just tied to the policies of one administration, this is a long-term trend.”

Former EPA senior scientist Elizabeth Southerland testified that EPA’s current budget is about half that it had in 1980, after adjusting for inflation, and stated the account funding research staff has dropped 40% over the past decade in real dollars.

She attested to how staff losses have harmed the agency’s ability to carry out its mission, remarking, “Despite valiant efforts to compensate, the lack of staff and resources has forced EPA to focus primarily on those rules with statutory or court ordered deadlines. Rules without deadlines, no matter how important for public health and environmental protection, are often postponed for years or take years to propose and promulgate.”

Andrew Rosenberg from the Union of Concerned Scientists, an advocacy organization, testified on UCS’ own report examining “brain drain” during the Trump administration. The report includes data from a 2018 survey of federal scientists that probed workplace morale, among other topics. UCS connects staff departures to the administration’s “attacks on science,” which it states occurred on an unprecedented scale.

Candice Wright, acting director of the Government Accountability Office’s science and technology unit, observed that agencies can use special authorities to streamline the hiring process and offer elevated pay to experts in certain high demand fields, such as cybersecurity or engineering. However, she noted GAO has identified opportunities to improve their use of these tools. She also highlighted how GAO has proposed steps to improve agency workplace culture, including actions to combat sexual harassment and improve scientific integrity policies.

Max Stier, president of the Partnership for Public Service, called for simplifying the USAJOBS portal and improving the overall efficiency of the federal hiring process, which he said is much slower than that of the private sector. He also proposed expanding special hiring authorities, making it easier to rehire former federal employees, and expanding the use of talent exchanges and service corps.

More broadly, Stier said agencies should work to repair the government’s “brand,” which he said has been damaged by government shutdowns, hiring freezes, and political interference in science. He suggested the government could improve recruitment efforts by “telling the story of its own workforce” and emphasizing the public service aspects of federal science careers.

On this point, Foster said he has had many conversations with professors about how to make early career scientists more aware of the range of job opportunities in the federal workforce. He added, “I think it's also underappreciated how influential an excellent scientist can be with a career at least partly in the federal science oversight business.”