DOE Recommends US Stay in ITER, Warns of Potential Delays to Other Projects

The Department of Energy recommends that the U.S. remain a member of the international ITER fusion project through fiscal year 2018 and then reassess its participation. The department notes that without budget increases for the Office of Science, the required U.S. contributions to ITER could delay other facility construction projects, such as the pending upgrades to x-ray and neutron user facilities which an advisory committee just finished assessing.

ITER remains the best candidate today to demonstrate sustained burning plasma, which is a necessary precursor to demonstrating fusion energy power. Having fully assessed the facts regarding the U.S. contributions to the ITER project, I recommend that the U.S. remain a partner in the ITER project through FY 2018 and focus on efforts related to First Plasma.

So reads the first two sentences of Energy Secretary Ernest Moniz’s foreword to the Department of Energy (DOE) report to Congress on U.S. participation in the ITER fusion project. Moniz goes on to recommend that the U.S. reevaluate its participation in the project prior to the fiscal year 2019 budget submission.

In the report, DOE states that the project appears “technically achievable, although significant technical and management risks remain.” DOE also emphasizes that the management improvements brought about under the new Director General Bernard Bigot are promising, but that more time is needed to determine if they will continue as the project progresses.

A schematic of the ITER tokamak design, left, and a view of the construction site, right. (Image credit – DOE)

Under the international ITER agreement, the U.S. is responsible for 9.09 percent of the construction costs and 13 percent of the operations costs. The estimated total U.S. contribution has risen from $1.1 billion to between $4 billion and $6.5 billion, of which the U.S. has already spent about $1 billion.

Two major milestones for ITER are achieving First Plasma (FP) and Deuterium-Tritium (DT) burn. DOE notes that the 2025 target date for FP does not include any schedule contingency and observes that “based on U.S. experience in large projects, the dates for FP and DT are not realistically achievable.” DOE states that 2028 is a more realistic date for FP.

To achieve FP in 2025, DOE estimates that the total U.S. share of the construction costs would be $4.65 billion, with annual contributions rising as high as $275 million. To achieve FP in 2028, DOE estimates the total cost would be $4.76 billion, with a maximum annual contribution of $250 million. These figures do not include funding for research activities.

The below chart depicts the preliminary projected annual and cumulative U.S. contributions under two scenarios: 2025 FP and 2028 FP. These estimates have not yet been independently validated and have not gone through DOE's CD-2 performance baseline approval process. 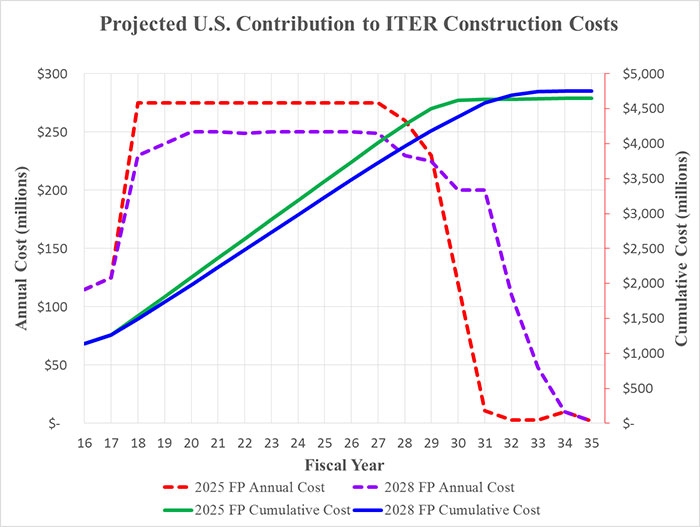 The report notes that unless the Office of Science receives budget increases above inflation, DOE will not be able to provide the required funds for ITER without significantly impacting other programs:

The estimated out-year budget increases for ITER could be accommodated with increases in future budgets for the DOE Office of Science (SC) that provide for growth at rates greater than inflation, but could not be accommodated within out-year budgets that have little or no growth without significant tradeoffs in other programs. … The DOE Office of Science is considering several other projects of $1B or more, including exascale computing, Long Baseline Neutrino Facility/Deep Underground Neutrino Experiment, Proton Improvement Plan, the Advanced Photon Source Upgrade, and Spallation Neutron Source Second Target Station. Absent additional resources being made available, DOE would need to delay some of the projects listed above or identify additional resources for the ITER project.

In response to the report, Sen. Lamar Alexander (R-TN)—chairman of the appropriations subcommittee for DOE—emphasized that he believes these other projects are more important:

In a time of tight budgets, the Secretary of Energy’s report on U.S. participation in the ITER Project in France makes clear that moving ahead with the project would come at the expense of other Office of Science priorities that the Department of Energy considers more important — and that I consider more important. Those projects include upgrading the Advanced Photon Source at Argonne National Laboratory, developing exascale supercomputers, and constructing the Second Target Station at the Spallation Neutron Source in Oak Ridge.

However, the report also underscores that withdrawing from ITER could also be costly, potentially exceeding $2 billion. This is because the ITER agreement—a binding international agreement approved domestically as a congressional-executive agreement—stipulates that any withdrawing country is still on the hook for its share of the construction costs. DOE notes that if the U.S. withdrew and did not pay, it would likely be criticized as an unreliable partner which could hinder the U.S. from entering other international partnerships.

Last December, the Director of the Office of Science Cherry Murray tasked BESAC with prioritizing these five upgrades. The below table from the report summarizes BESAC’s conclusions:

BESAC’s summary of their user facility upgrade assessment. Criteria 1 was “the ability of a proposed facility or upgrade to contribute to world-leading science” and criteria 2 was “the readiness to proceed to construction.”

BESAC concluded that all five projects are “absolutely central” to keeping the U.S.’ x-ray and neutron user facilities ahead of or competitive with other countries’ facilities. Throughout the report, BESAC makes note of recent or upcoming investments by European and Asian countries in upgraded user facilities and reiterates an observation from a 2013 BESAC report: “The success of the U.S. light source enterprise has inspired both Europe and Asia to emulate the U.S. resulting in tremendous light source developments in both regions.”

BESAC decided that the two SNS upgrades require additional study before initiating construction. Also, since the APS-U and ALS-U upgrades will require each facility to go offline for about one year, BESAC emphasized that the upgrades should be staged to minimize the impact on the user community.

In the coming years, Congress will need to decide whether it is willing to devote the resources necessary to carry out these upgrades alongside full participation in ITER or to delay or abandon altogether one or more of these projects.