In a new report, the American Physical Society, the American Chemical Society, and the Materials Research Society recommend actions that the U.S. government and scientific societies should take to make researchers less vulnerable to liquid helium price increases, price volatility, and supply interruptions—all of which could be exacerbated by the impending closure of the Federal Helium Reserve. 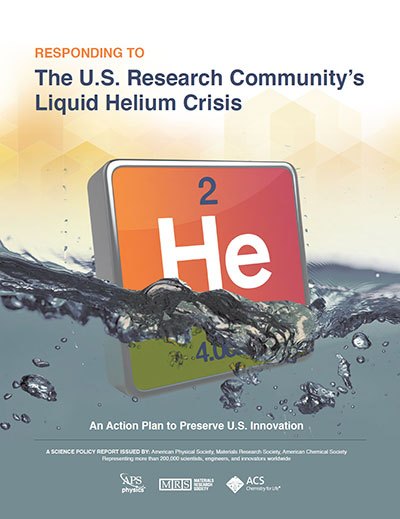 On Oct. 6, the American Physical Society (an AIP Member Society), the American Chemical Society, and the Materials Research Society issued a report containing five specific recommendations on ways to resolve what has become a dire situation for many U.S. researchers who rely on liquid helium to conduct experiments.

"Liquid helium has been the lifeblood of tens of thousands of America’s researchers and scientists. But we now face a liquid helium supply crisis that – if we do not take appropriate steps – would put American innovation at risk," the societies warn.

The recommended actions aim to facilitate helium conservation and ensure that federally funded researchers have long-term access to a stable supply of reasonably priced liquid helium.

Alongside the report, the societies have launched a website that helps researchers calculate whether investing in helium conservation equipment makes economic sense based on the magnitude of their expenditures on helium.

An irreplaceable and nonrenewable resource

Helium is used in a wide variety of applications, such as semiconductor and fiber optics manufacturing, medical imaging, spectrometry, balloon lifting, leak detection, and low-temperature experiments. Although there are substitutes for helium in certain applications, the report emphasizes that there is no alternative means of reaching the extremely low temperatures necessary for certain fields of research.

Helium is produced naturally by radioactive decay of heavy elements in the Earth’s crust. Some of this helium becomes trapped underground and can be recovered during natural gas extraction.

However, helium accumulates in the crust extremely slowly and extraction from natural gas is only economical if the gas contains a sufficiently high concentration of helium. Furthermore, since helium is lighter than air, any helium vented to the atmosphere quickly escapes and becomes essentially unrecoverable.

High prices and shortages have had chilling effects on research

In recent years, the research community has been subject to volatile and increasing liquid helium prices as well as supply interruptions. The price for crude helium has increased by 60 percent since October 2009, and some researchers have experienced price increases of over 250 percent.

The report also notes that the research community is especially susceptible to volatile prices and supply interruptions because it lacks the purchasing power of other helium users that comprise a larger segment of the helium market. In 2015, only 6 percent of global helium usage was for science and engineering applications. 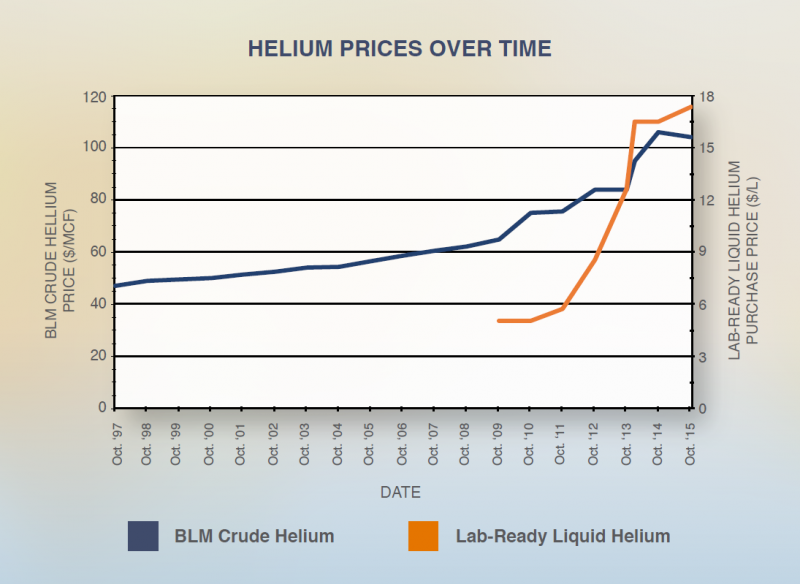 The report describes the impacts that price increases have had on researchers funded by the National Science Foundation’s Division of Materials Research (DMR). In the mid-2000s, low-temperature researchers supported by DMR typically spent about $15,000 or 10 percent of their grants on helium annually. As of 2015, some awardees were spending over $40,000 on helium annually, yet the average DMR grant size has only increased by about $10,000 since helium prices began to spike. This has forced some researchers to forgo hiring graduate students and skip their summer salaries in order to pay for helium. Others have completely abandoned areas of research that require liquid helium.

Simon Bare, co-chair of the study and director of the chemistry and catalysis division at the SLAC National Accelerator Laboratory, explained that these sorts of negative effects are what led the study committee to characterize the situation as a crisis:

As a researcher, you want to have control over your research. When you can’t predict the cost and delivery schedule of helium, you ask yourself, ‘Do I really want to invest in this field of research?’ Right now helium is a variable with uncontrolled parameters. That’s what makes it a crisis. You can’t plan.

APS and ACS have already acted to help federally funded researchers to cope with these challenges, establishing a Liquid Helium Purchasing Program in partnership with the Defense Logistics Agency. The agency acts as a helium broker for universities enrolled in the program, increasing their ability to negotiate contracts with lower prices and more reliable delivery schedules. However, the societies note that this is only a near-term means of alleviating the problem. Accordingly, they point to helium conservation as key to protecting researchers from price increases and supply shortages over the long run.

Helium conservation equipment—such as closed-cycle cryostats and liquefiers—can reduce researchers’ annual helium consumption by more than 95 percent and can pay for itself within a few years for some users. However, most academic researchers do not have the funds necessary to purchase such systems, which can cost well over $100,000, so they instead have to continually purchase helium. “For many, this is clearly not the most efficient use of their funding, and it is literally money evaporating into thin air,” the report observes.

The report also notes that there is precedent for federal agencies helping researchers purchase conservation systems. In 2014, NSF’s DMR began allocating about $2 million annually for a handful of eligible researchers to purchase small-scale helium liquefiers. Nevertheless, at this rate it will take about 15 years to purchase liquefiers for all the eligible grantees, and DMR-funded researchers represent only a fraction of researchers who use liquid helium. Furthermore, no other federal agencies appear to have implemented formal strategies or programs to encourage helium conservation.

Accordingly, the societies recommend that the White House Office of Science and Technology Policy and the Office of Management and Budget direct agencies that use or support the use of helium to formulate helium conservation plans and to consider the approach taken by DMR. Furthermore, the societies recommend that Congress allocate a portion of the profits from federal helium sales toward purchase of helium conservation systems for academic researchers. Currently, such sales generate about $430,000 per day, all of which is deposited into the General Fund of the U.S. Treasury.

The Federal Helium Reserve is a strategic stockpile of helium established by the U.S. government in 1960 and today managed by the Bureau of Land Management (BLM). The government ultimately decided that it no longer needed to maintain the reserve, and set in motion a process to sell off the entire reserve through the Helium Privatization Act of 1996 and the Helium Stewardship Act of 2013. Under current law, the reserve must close no later than September 2021.

The societies lament this decision in the report. "Ideally, the Federal Helium Reserve would remain open indefinitely and continue to serve the U.S. government’s helium supply needs by providing in-kind helium to vendors that is marked for federal end-users, including scientific researchers supported by federal grants.” However, they do not recommend that the government reverse its decision to get out of the helium business. Instead, they focus their recommendations on ensuring that federally funded researchers have priority access to certain helium sales for the remainder of the reserve drawdown and afterward.

In particular, they recommend that BLM clarify that federal grantees are eligible for priority access to in-kind federal helium sales and that BLM establish an analogous in-kind program for helium extracted by private companies from federal lands. Reps. Rob Bishop (R-UT) and Raúl Grijalva (D-AZ)—the chairman and ranking member, respectively, of the House Natural Resources Committee—have indicated their support for these recommendations in a letter they sent to BLM on the day of the report release.