Funding for the National Institutes of Health is expanding by $3 billion or 9 percent in fiscal year 2018, with all institutes receiving increases over last year’s levels. Congress has also firmly rejected the administration’s proposal to cap indirect costs paid to research institutions to reimburse them for facilities and administrative overhead.

Following a sizeable $2 billion spending boost it received in last year’s appropriations, the National Institutes of Health is receiving an even larger $3 billion, or 9 percent, increase this year. This is the largest increase in dollars that any nondefense research agency is receiving in fiscal year 2018, and it brings the biomedical research agency's to just over $37 billion.

The rapid growth of the NIH budget in recent years reflects the strong, bipartisan support the agency has on Capitol Hill, as well as the supplementary support the agency now receives through the 21st Century Cures Act — major authorization and funding legislation for NIH enacted at the end of President Obama’s tenure. $496 million of the boost the agency is receiving derives from funding the 21st Century Cures Act automatically sets aside for specific initiatives, including the Cancer Moonshot Initiative, BRAIN Initiative, and “All of Us” Precision Medicine Initiative.

The appropriation is a stark rejection of President Trump’s proposal to cut NIH by 22 percent or nearly $7.5 billion. The appropriations law also rebuffs the administration’s controversial proposal to cap the indirect cost reimbursements that NIH provides to research institutions to cover the facilities, administrative, and other overhead costs of conducting research.

The law provides at least 5 percent funding increases for each of NIH’s 27 institutes and centers. The following chart includes figures for five of the institutes that are especially relevant to the physical sciences. 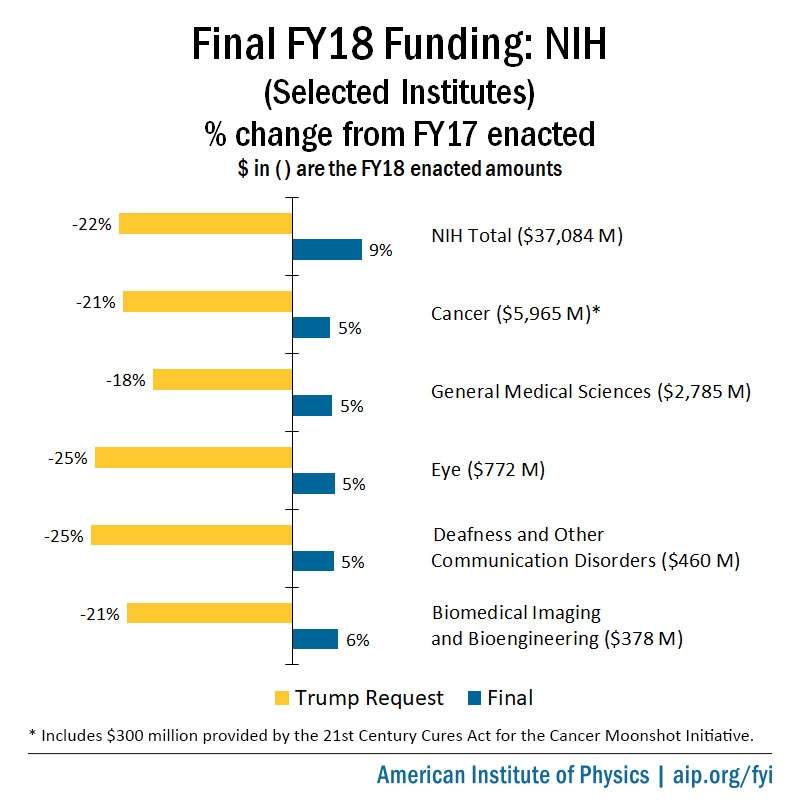 A joint House-Senate explanatory statement containing detailed funding and policy direction for NIH is available here. The statement notes that guidance in House and Senate Appropriations Committee reports carries the same weight as the statement, unless specifically negated. Tables with funding amounts by account are available in FYI’s Federal Science Budget Tracker.

As a part of its fiscal year 2018 budget request, the Trump administration proposed capping the reimbursements that NIH provides to research institutions to compensate for facilities, administrative, and other overhead costs of conducting research, at 10 percent of total grant cost, a level significantly below the current average rate. University leaders warned the cap would lead many research universities to stop conducting federally-sponsored research altogether and damage the longstanding compact between them and the government.

Congress pushed back strongly on the proposal during budget hearings and inserted a provision into stopgap spending legislation passed last fall prohibiting the administration from changing the rules, procedures, or formulas for setting indirect cost rates. The final fiscal year 2018 appropriations legislation extends this prohibition, requiring indirect cost rates to be negotiated, set, and applied this year using the same rules and to the “same extent and in the same manner” as they were last year.

While the Committee appreciates the Secretary’s efforts to find efficiencies in NIH research spending, the Administration’s proposal to drastically reduce and cap reimbursement of facilities and administrative (F&A) costs to research institutions is misguided and would have a devastating impact on biomedical research across the country. To ensure that NIH can continue supporting both direct and F&A costs as is their current practice, the bill includes a new general provision directing NIH to continue reimbursing institutions for F&A costs according to the rules and procedures described in 45 CFR 75 (with the exception of existing waivers for training grants).

The methodology for negotiating indirect costs has been in place since 1965, and rates have remained largely stable across NIH grantees for decades. The Administration's proposal would radically change the nature of the Federal Government's relationship with the research community, abandoning the Government's long-established responsibility for underwriting much of the Nation's research infrastructure, and jeopardizing biomedical research nationwide. The Committee has not seen any details of the proposal that might explain how it could be accomplished without throwing research programs across the country into disarray.

The statement calls for the appropriation to “support an increase in the number of new and competing Research Project Grants.” It also directs NIH to keep focusing on young and first-time investigators and take “actions to significantly reduce the average age of an NIH-supported new investigator.”

The House report also calls on NIH “to restore extramural support to at least 90 percent of all NIH funding.”

Cancer research boost includes Moonshot funds. The legislation directs $5.66 billion to cancer research through the National Cancer Institute and adds an additional $300 million through funding provided by the 21st Century Cures Act for the Cancer Moonshot Initiative. All together, this adds up to a 5 percent year-over-year increase for the NCI.

New center for heavy ion cancer therapy research proposed. The statement specifically calls out a promising new cancer therapy based on heavy ion irradiation technology that NIH is researching, noting the U.S. “stands to be a world leader in this advanced research.” It calls for NIH to consider developing a state-of-the-art heavy ion research facility in the U.S. and work with the Departments of Defense and Energy to equip it.

Collaboration with DOE and national labs urged. Both the House and Senate reports call on NIH to engage collaboratively with the Department of Energy, including the national laboratories and other potential partners, to utilize their broader scientific and technological capabilities for biomedical research. The Senate adds that, “In particular, DOE and NIH should work together to support access for biomedical researchers to cutting-edge technology resources.”

Harnessing big data seen as a major strategic challenge. Figuring out how to make effective use of the agency’s growing stores of digital scientific data to enable breakthroughs is “one of the biggest obstacles facing NIH,” according to the Senate report. It directs NIH to work with external partners and stakeholders to create a detailed strategic plan “spelling out it how intends to make big data sustainable, interoperable, accessible, and usable.”