The budget for the U.S. Geological Survey is increasing 10% to $1.3 billion under its appropriation for fiscal year 2020. Most of the additional resources will go to facilities construction projects, climate change research centers, and geospatial mapping programs. Congress has also rejected the administration’s proposal to reorganize the agency’s seven science mission areas and relocate some headquarters staff from Virginia to Colorado. 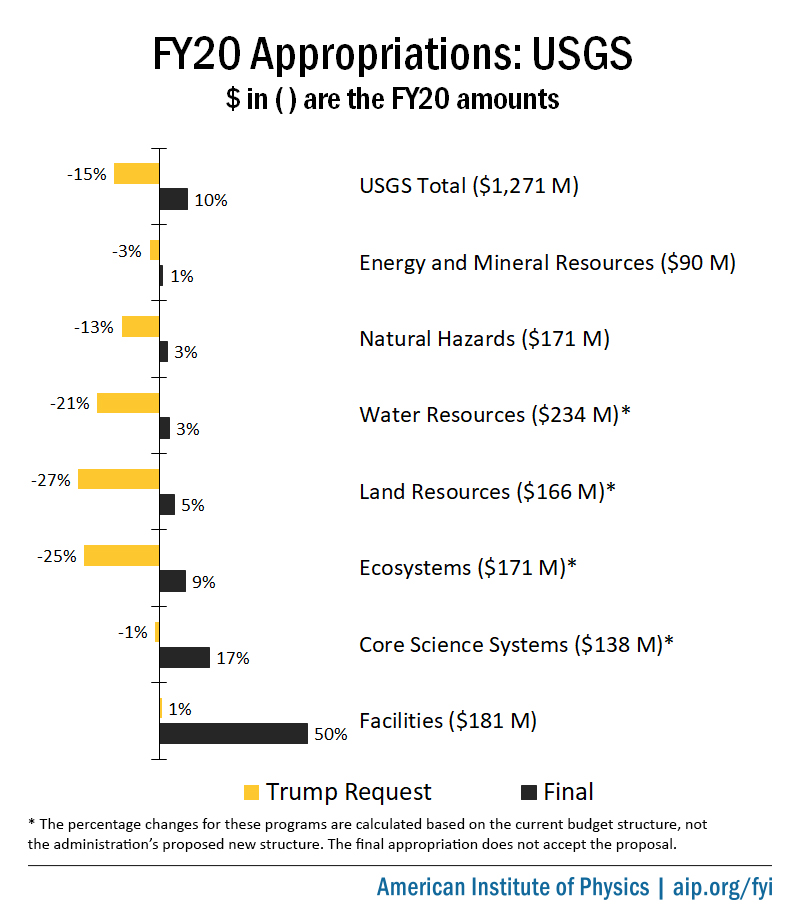 An explanatory statement accompanying Congress’ appropriations legislation for USGS provides detailed funding and policy direction, and the House and Senate reports on their original proposals convey additional direction except where the language is negated by the final statement. For summary tables, consult the FYI Federal Science Budget Tracker.

The administration had proposed to subsume USGS’ Land Resources and Environmental Health mission areas within other mission areas and to restructure the Ecosystems, Water Resources, and Core Science Systems mission areas. House appropriators opposed the move on the grounds it “reduces program and funding transparency.” Ultimately, Congress concluded that while consolidating programs could improve efficiency, “more information is necessary in order to properly evaluate if any budget restructure would achieve that goal,” adding that appropriators “stand ready” to work with USGS on a more detailed proposal.

Congress is also not providing $6 million that USGS requested through its Science Support account that would have funded a broader agency reorganization effort, including the relocation of some headquarters staff to a new facility in Lakewood, Colorado. It does not explain why the funds were denied, but House appropriators indicated they felt USGS “has not presented strong foundational analysis or a compelling argument to support establishing a headquarters presence in the West.” They added that such a relocation would “dramatically change the organization, have significant financial costs, and impact the survey’s effectiveness and strategic national-level partnerships with federal agencies, states, scientific organizations, and stakeholders.”

The budget for the Natural Hazards mission area is increasing 3% to $171 million, with the additional resources allocated to programs focused on preparing for earthquakes, landslides, and solar storms. Funding for volcanic and marine hazards programs is remaining level at $30 million and $41 million, respectively.

Earthquake hazards. Funding for the Earthquake Hazards program is increasing from $83 million to $85 million. Within this amount, $19 million is for expanding the ShakeAlert earthquake early warning system on the West Coast and $6.7 million is allotted for associated capital costs. The appropriation also provides $3 million for USGS to operate USArray stations it recently acquired from the National Science Foundation.

Geomagnetic hazards. The Geomagnetism program budget is doubling to $4 million to accommodate USGS’ request for $1.7 million to complete a survey of the Earth’s electric and magnetic fields across the U.S. in support of the National Space Weather Strategy and mineral resource characterization efforts. Such data can be used to determine ground conductivity, an important parameter in assessing the impacts of solar storms.

Critical minerals. The Mineral Resources program budget is increasing 2% to $60 million, with $10.6 million provided as requested for the Earth Mapping Resources Initiative (Earth MRI), which is charting deposits of critical minerals in the U.S. The effort follows from a 2017 executive order that established a federal critical minerals strategy.

Geologic and geospatial mapping. The National Cooperative Geologic Mapping program budget is increasing 41% to $34 million to support the third phase of the National Geologic Map Database. The House report notes the effort will “bring together detailed national and continental-resolution 2D and 3D information produced throughout [USGS] and by federal and state partners.”

The appropriation also increases the National Geospatial Program budget by 14% to $79 million, specifying a $5 million increase for the 3D Elevation Program to accelerate mapping of the Great Lakes region and a $3 million increase to “produce digital surface models using unclassified satellite optical data for the U.S. and territories not mapped with LiDAR in 2021.” 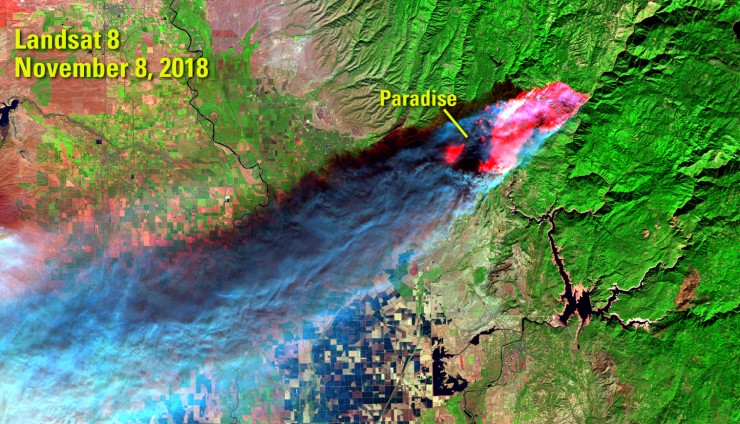 An image of the Camp Fire as it consumes the town of Paradise, California, taken by the Landsat 8 satellite.

Within the Land Resources mission area, the budget for Climate Adaptation Science Centers is increasing 51% to $38 million, matching the House’s proposal. The House report states this amount “ensures that all eight regional centers remain open, operational, and fully functional and is a step toward funding them at the authorized level.” It also specifies $4 million should go toward creating a new center in the Midwest.

Meanwhile, the budget for the Land Change Science program is decreasing by 15% to $29 million, reflecting “completion of biological carbon sequestration activities.” The National Land Imaging program, which funds the development of ground control systems for Landsat 9, is remaining level at $99 million.

The appropriation boosts the facilities budget from $120 million to $181 million, with the increase entirely directed toward deferred maintenance and capital improvements. The projects include construction of a new Hydrologic Instrumentation Facility, replacement of facilities destroyed by the 2018 eruption of the Kilauea volcano in Hawaii, and renovation of laboratories that handle dangerous pathogens at the National Wildlife Health Center in Wisconsin.