Several federal agencies are working to curb foreign nations, particularly China, from using talent recruitment programs and other methods to capitalize on the fruits of U.S.-financed R&D. In the latest major development, the Department of Energy announced last week that it will restrict its employees and future grantees from participating in recruitment programs operated by “sensitive” countries. 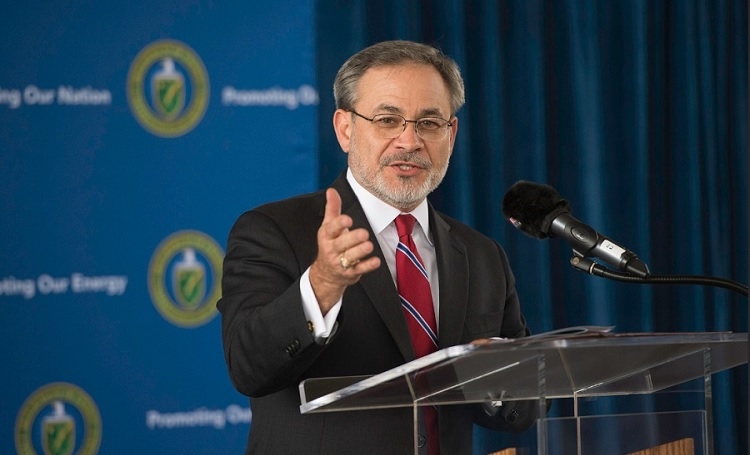 Deputy Energy Secretary Dan Brouillette speaking at an event in 2017. Brouillette announced last week that the Department of Energy will restrict its employees and grantees from participating in talent recruitment programs run by certain countries.

The Department of Energy issued a memorandum last week announcing it will restrict its employees, contractor personnel, and grantees from participating in talent recruitment programs operated by “sensitive” countries.

Although the memo does not mention any country specifically, U.S. intelligence officials have asserted the Chinese government uses the various recruitment programs it operates to appropriate research and intellectual property from the U.S. Such programs offer both Chinese expatriates and non-Chinese researchers generous stipends to set up labs in China on a part-time or full-time basis.

Meanwhile, the Department of Defense, National Institutes of Health, and National Science Foundation are taking a closer look at whether grantees have received funding from foreign governments.

DOE’s memo states the department’s personnel “will be subject to limitations, including prohibitions on their ability currently or in the future to participate in foreign talent recruitment programs of countries deemed sensitive by DOE while employed by DOE, or performing work within the scope of a DOE contract. These limitations also will apply to recipients of financial assistance (e.g., grants or cooperative agreements).”

Although the memo’s wording suggests DOE will not necessarily outright ban participation in recruitment programs, other statements by DOE officials indicate they plan to take a strict approach. Asked by FYI how the policy will apply to grant recipients employed by universities, a DOE spokesperson replied, “All future grants will have clauses prohibiting participation in foreign talent recruitment programs sponsored by countries deemed sensitive by DOE. It will be incumbent on the grant recipients to ensure no talent program members are involved in their research as it relates to the DOE grant.”

The memo explains that while DOE values collaboration with foreign entities, the new policy seeks to “limit real or potential exploitation” of the U.S. scientific community. Elaborating on its motivation, DOE provided FYI with a statement that reads in part, “Unfortunately, some foreign government-sponsored talent recruitment programs have taken advantage of America’s openness to collaboration to infiltrate our labs, steal our technology and use our own resources against us. We can no longer allow these programs to operate within our scientific community at the expense of our own national interest.”

Commenting on the memo to the Wall Street Journal, which first reported on it, Deputy Energy Secretary Dan Brouillette said the move is meant to "protect U.S. national security interests and scientific integrity." He added, "You're either going to work for us or work for them."

In a separate development, first reported today by ScienceInsider, DOE has also issued a memo announcing plans to restrict researchers it funds from collaborating with individuals from “sensitive” countries if they are working in as yet unspecified “emerging research areas and technologies.”

Discussion of how agencies should respond to talent recruitment programs first rose to prominence last year when Rep. Mike Gallagher (R-WI) attached an amendment to a must-pass defense policy bill that explicitly aimed to curtail participation in such programs.

The provision would have required applicants for DOD research grants to certify that no individuals who would be funded by the grant had ever participated in any talent recruitment programs operated by China, Russia, North Korea, or Iran. If funding recipients could not provide that certification, the department would have been empowered to cancel current and future funding to them.

In the final bill, Congress replaced this language with a compromise provision directing DOD to carry out an “initiative to support protection of national security academic researchers from undue influence,” including that posed by foreign talent recruitment programs. As part of the initiative, DOD is required to evaluate the ability of government and academic institutions to assess whether researchers affiliated with the department have participated in such programs.

It is not clear how many U.S.-based researchers have participated in these programs. A Hoover Institution report published in November estimates that more than 300 U.S. government researchers and more than 600 individuals at U.S. companies have received funding from China’s marquee Thousand Talents program based on a review of official websites that listed its participants. China has since removed information about participants from the program’s websites, reportedly due to the FBI’s recent scrutiny of the program.

NIH and NSF have also turned their attention to grantees’ ties to foreign governments and other forms of foreign “influence” on research, but have taken a markedly different approach.

Last summer, NIH formed a Working Group on Foreign Influences on Research Integrity, which released a draft report in December. The report recommends the agency strengthen the security of its peer review system and better communicate the importance of disclosing funding contributions from foreign entities, among other actions.

Discussing the report with FYI, Lawrence Tabak, principal deputy director of NIH and a member of the working group, said disclosure enables NIH to assess if researchers have a “conflict of commitment,” or if a proposed project would be duplicative. He noted the agency has learned of some researchers operating “shadow labs” outside the U.S. While NIH’s intramural researchers are prohibited from establishing such labs, it is up to universities to decide if such arrangements are permissible for its employees who receive NIH funds. “This is not about banning participation in foreign research activities,” Tabak added.

Tabak also stressed that NIH is taking care not to stigmatize foreign researchers. “We don’t want to throw the baby out with the bath water,” he said. “Overwhelmingly, foreign nationals make enormous contributions to the biomedical research workforce.”

The working group report states that a number of participants in talent recruitment programs had violated NIH policies, though it does not offer details. It does however cite the Thousand Talents program as an example of a recruitment program. Tabak declined to offer examples of cases in which NIH policies were violated, citing the fact that the agency’s investigation is ongoing, but emphasized the problem is not unique to China. “It’s a numbers game. There’s so much investment currently in research in China that one turns their attention to it. But this is in no way a China-specific issue,” he said.

In parallel with the NIH effort, the governing board of the National Science Foundation issued a statement this fall urging institutions to rigorously enforce conflict of interest and commitment policies to “protect the integrity of research.” The statement also “strongly reaffirms” a presidential directive which dictates that the federal government should generally not restrict the outputs of fundamental research it supports.

First, while NSF has long required grantees to disclose foreign support, it plans to create a streamlined form to improve reporting. Second, the agency has commissioned the elite JASON advisory group to conduct a study this summer that will recommend ways for NSF to better protect its merit review system and for grantee institutions to maintain balance between openness and security. Finally, NSF is funding a National Academies effort to collect relevant data and convene a series of roundtables this spring with stakeholders from academia, science agencies, and the intelligence community.

“We hear a lot about the potential for foreign influence and its negative impact on our research ecosystem. And what we’ve asked the Academies to do is help us collect information, evidence, and data that can help us understand the scope and extent of the issue in a measured, balanced way,” Keiser said. 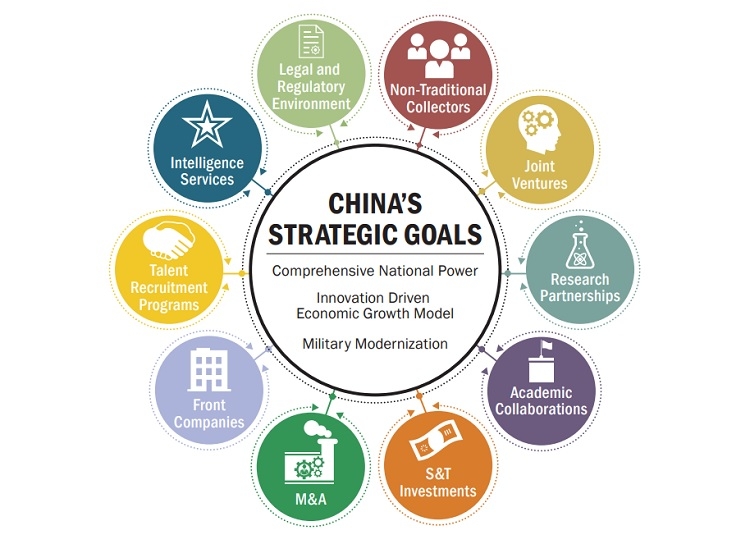 U.S. intelligence officials allege the Chinese government uses talent recruitment programs as part of a multi-faceted strategy to bolster its domestic technological capacity through both legal and illegal means. The full version of this chart appears in testimony by the head of the Justice Department’s National Security Division at a Senate Judiciary Committee hearing in December.

(Image credit – Office of the Director of National Intelligence)

As science agencies implement measures to protect against undue foreign influence, Congress and the Trump administration are continuing to draw attention to the issue.

Last fall, the Justice Department launched a “China initiative” focused on combatting economic espionage. It has since issued a steady stream of indictments implicating Chinese nationals in corporate espionage. China has denied that it orchestrates the theft of intellectual property.

China was also a major focus at the Senate Intelligence Committee’s annual hearing on “worldwide threats,” held on Jan. 29. In testimony to the committee, top intelligence officials stated that they expect Chinese intelligence services will “exploit the openness of American society, especially academia and the scientific community, using a variety of means.” They also warned the U.S.’s position of global leadership in science and technology is waning largely due to increased R&D investments by China.

Based on concerns about China, Sen. Mark Warner (D-VA), the top Democrat on the committee, and Sen. Marco Rubio (R-FL) have already introduced a bill this year that would establish an Office of Critical Technologies and Security within the White House. The office would be responsible for coordinating a whole-of-government effort to protect critical technologies and “reestablish the U.S. as the world leader in research and development.”