As part of its “Return on Investment” initiative, the National Institute of Standards and Technology has released a draft blueprint for revamping policies that govern the commercialization of technologies produced through federally funded R&D projects. 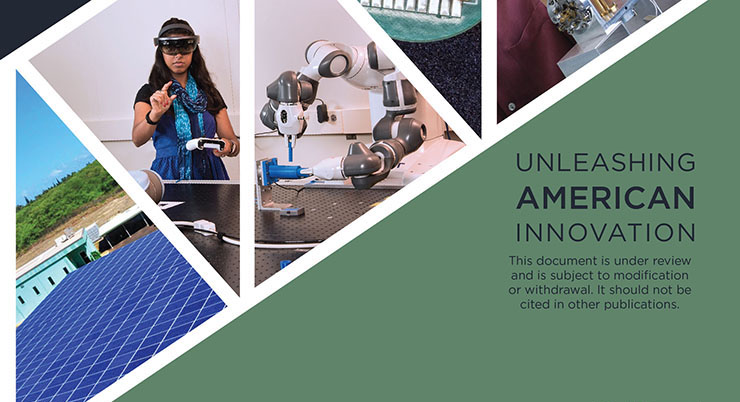 On Dec. 6, the National Institute of Standards and Technology released a draft green paper outlining potential steps to modernize policies governing the commercialization of technologies developed with federal support. NIST produced the report as part of its Return on Investment Initiative, a joint effort with the White House Office of Science and Technology Policy to implement the “lab-to-market” goal of the President’s Management Agenda, a broad policy document covering federal government operations.

Described as a “discussion document,” the report summarizes input received from external stakeholders during the first phase of the initiative and outlines 15 “intended actions” for improving the federal technology transfer system, many of which would require legislative or regulatory action to implement. These actions are organized around five goals: reducing regulatory impediments, increasing engagement with the private sector, building a federal entrepreneurial workforce, supporting new tools to facilitate technology transfer, and improving metrics and benchmarks to measure technology transfer success.

NIST is accepting comments on the report through Jan. 9, 2019. (Update: The deadline for comments has been extended to February 5, 2019.)

The actions outlined in the report primarily pertain to two foundational technology transfer laws enacted in 1980, the Bayh-Dole Act and Stevenson-Wydler Act. The Bayh-Dole Act enabled universities, other nonprofit organizations, and small businesses to retain patent rights to inventions supported by federal funding, while the Stevenson-Wydler Act created mechanisms to facilitate the transfer of inventions from federal laboratories to commercial entities.

Most of the proposals involve modifying these laws or extending the authorities they grant to additional agencies.

The report states that many comments NIST received related to variation in the policies, practices, and authorities among federal agencies.

It also observes that the R&D landscape has been “dramatically reconfigured” since the laws' enactment due to the increasing globalization and digitization of the economy. “Although federal technology transfer laws and activities have served the Nation well over nearly four decades and continue to support innovation, the U.S. is continuing to lose ground to competition,” the report states.

The report offers a number of recommendations on how federal laboratories can improve cooperation with the private sector and facilitate the development and commercialization of new inventions. They focus on four mechanisms used at particular agencies that could be expanded across other agencies.

Agreements for Commercializing Technology (ACT). Following a six-year pilot program, last year the Department of Energy permanently authorized its national laboratories to enter into ACTs with companies and universities to facilitate access to the labs’ expertise, capabilities, and facilities. According to the report, ACT permits the negotiation of more “business friendly” terms for intellectual property rights and other contract provisions, and it calls for the mechanism to be extended to all government-owned contractor-operated laboratories.

Research Transaction Authority (RTA). The report proposes the creation of a new partnership mechanism modeled on the Other Transaction Authority that Congress has granted the Department of Defense to facilitate certain R&D, prototyping, and production projects. The new RTA would expand the mechanism’s use across government, while excluding its use for “procurement and financial assistance actions.” The report states the authority would “parallel” the Space Act Agreements mechanism used by NASA.

Nonprofit Foundations. Congress has authorized a few agencies, such as the National Institutes of Health, to establish nonprofit foundations that can accept financial contributions from private entities and channel them into R&D grants. The “IMPACT for Energy Act” currently pending in Congress would direct DOE to establish a similar entity. According to the report, such foundations can serve to “accelerate technology maturation, transfer, and commercialization efforts of an agency’s R&D outcomes.” It calls for Congress to authorize all R&D agencies to establish nonprofit research foundations.

Enhanced Use Lease Authority (EULA). Several agencies, including DOD and NASA, use EULA to lease “underutilized" property to non-government entities for creating open campuses and research parks near their facilities, among other purposes. The report calls on Congress to grant EULA to all federal laboratories.

The report also proposes a change to agencies’ current authority to enter into Cooperative Research and Development Agreements (CRADAs) with external organizations. Citing comments received, it states there is a perception that the government does not do enough to protect trade secrets, describing this as a significant impediment to forming public-private R&D collaborations. Accordingly, it calls for the statutory duration of the information protection period authorized for CRADAs to be doubled to 10 years in certain circumstances.

The report calls for regulatory changes to limit this prerogative to government use and not third parties. It further proposes regulatory action to prohibit the use of march-in rights as a mechanism to control the price of goods and services.

Although the government has never exercised march-in rights, some groups have pressured NIH to do so to help lower drug prices. However, government officials and the act’s original sponsors, former Sens. Bob Dole (R-KS) and Birch Bayh (D-IN), have pointed out the provision only permits the government to compel a license under specific circumstances, such as when the patent holder has failed to commercialize an invention.

Stating that many researchers lack knowledge about how to identify and take advantage of opportunities to commercialize inventions, the report outlines steps the government can take to “build a more entrepreneurial R&D workforce.” It proposes expanding extramural and intermural entrepreneurship programs such as the National Science Foundation’s I-Corps program and DOE’s Lab-Embedded Entrepreneurship Program. Additionally, it recommends Congress authorize agencies to grant sabbaticals or “entrepreneurial leave” to staff and raise the cap on royalties that agencies can pay to their researchers from $150,000 to $500,000, building on a pilot program recently implemented at DOD.

To track progress on the commercialization of federally funded innovations, the report proposes agencies develop an interoperable platform that enables them to report intellectual property produced through their extramural and intramural R&D programs. It also calls for creating a public data portal that “increases visibility into the federal innovation ecosystem” by providing information on expertise and equipment within federal labs.

The report notes that the Department of Commerce currently has regulatory authority under the Bayh-Dole Act to implement some of the recommended actions, such as clarifications to march-in rights. However, it explains that no such authority exists for the Stevenson-Wydler Act, meaning that “clarifications for minor items must be enacted by the Congress rather than implemented through the promulgation of regulations.”

Accordingly, it proposes that Congress grant the department authority to implement regulations under the Stevenson-Wydler Act to reduce the need for legislative changes.

In a recent interview, NIST Director Walter Copan expressed optimism that Congress will be receptive to the proposals in the report, predicting “very good support from both sides of the aisle in this effort and tremendous support as well from the U.S. community of innovation.”