Acting head of the National Oceanic and Atmospheric Administration Neil Jacobs and other top agency officials are at odds over an independent investigation that concluded he violated the agency’s scientific integrity policy during the controversy that erupted last fall over Hurricane Dorian forecasts. 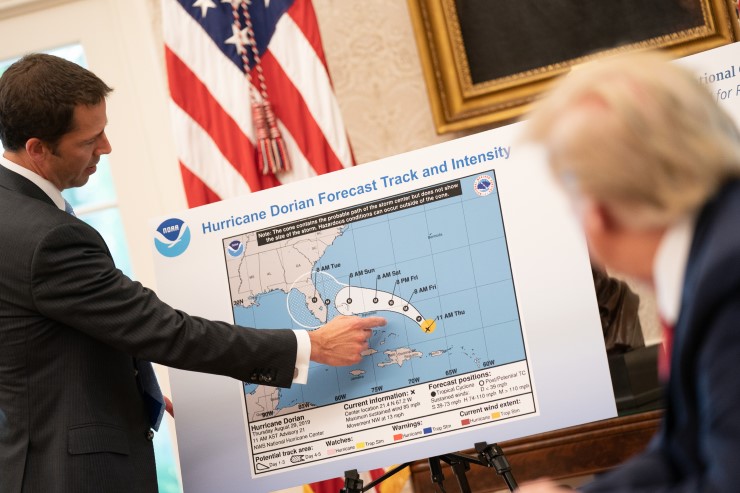 The National Oceanic and Atmospheric Administration released an independent report last week that concludes NOAA’s acting head Neil Jacobs violated the agency’s scientific integrity policy during the highly public controversy last fall surrounding forecasts of Hurricane Dorian. Jacobs has since been nominated by President Trump to lead NOAA officially and is currently awaiting a confirmation vote by the Senate.

The report details how Jacobs and other NOAA officials participated in crafting an unsigned statement released on Sept. 6 that was widely regarded as rebuking National Weather Service forecasters for contradicting a tweet from Trump that incorrectly characterized the hurricane’s danger to Alabama. It argues that the statement exerted inappropriate pressure on the forecasters and undermined NOAA’s “reputation as an independent scientific agency.”

NOAA has accepted the report’s findings and recommendations, though Jacobs has denied his actions violated the integrity policy. Meanwhile, NOAA Acting Chief Scientist Craig McLean, an early critic of the agency’s role in the controversy, has lamented that no punitive response had been recommended for Jacobs.

Completed in March, the report was prepared by a panel of the National Academy of Public Administration (NAPA) at the request of NOAA’s scientific integrity officer after she received four separate complaints about the Hurricane Dorian incident. These were filed by McLean, former NOAA Administrator Jane Lubchenco, NOAA Emergency Response Division scientist Carl Childs, and Rep. Paul Tonko (D-NY), the lead sponsor of scientific integrity legislation currently pending in Congress.

Taken together, the complaints alleged three separate breaches of scientific integrity, which the NAPA panel considered in turn. The panel concludes that one of the allegations, concerning guidance issued by NOAA leaders to limit certain media interactions in the immediate aftermath of Trump’s tweet, does not represent a violation of the agency’s policy. Although some employees felt the guidance discouraged communication with the media about scientific findings, the report states it was not inappropriate because, “in times of emergency, it is important to develop a coordinated, effective communication approach with the press and the public at large.”

However, the report finds that the two other allegations, both concerning the Sept. 6 statement, are substantiated “by a preponderance of evidence” and concludes that Jacobs “engaged in misconduct intentionally, knowingly, or in reckless disregard” of the integrity policy.

First, the report finds that the statement’s authors failed to consult with the forecasters they referenced, who had a “right to review and correct” it under the integrity policy, just as they would in the case of a press release about their work. Although the policy does not explicitly mention agency statements in this context, the report argues the same principle applies because the forecasters’ tweet was a “scientific product” that “reflects the forecasters’ professional judgment and is based on the results of the forecasters’ scientific activities.” The report recommends, though, that NOAA amend its policy to clarify that scientists’ right to review applies to “any official communication that relies on their scientific analysis,” and that the agency provide guidance for applying the policy during severe weather events.

Second, the report finds that the statement appeared to result from “strong external pressure” by the Commerce Department, which oversees NOAA. It cites accounts by Jacobs and others of a middle-of-the-night phone call on Sept. 6 followed by an in-person meeting later that day. The report quotes Jacobs as saying that “given the amount of panic and concern, and getting called at three in the morning, it was pretty well implied that this was something that was a fireable offense if you disobeyed.” The report further argues there was nothing in the forecasters’ tweet requiring correction, that the NOAA statement was in any case an inappropriate way to convey such a correction, and that the statement could have a “chilling effect” discouraging other agency staff from sharing their scientific opinions. For all these reasons, the report concludes the statement was “inconsistent with the intent and requirements” of the integrity policy.

In his response to the report, Jacobs argues that while it is “fair” to criticize NOAA’s statement, no violation of the agency’s policies or code of ethics occurred.

Specifically, Jacobs disputes the claim that NOAA’s integrity policy applies to either the forecasters’ tweet or the agency’s statement, contending that only forecasts themselves constitute a purely scientific activity. He writes, “While the tweet is intended to convey the risks to Alabama residents based on the scientific assessments used to produce the storm forecast, it is far removed from the research and underlying science for which the definitions, policy on integrity of scientific activity, and codes of scientific conduct and ethics for scientific supervision and management are predicated.” He further suggests it would be impractical to allow scientists to review every instance of communication that references their work.

Jacobs also argues that the report “never questions or refutes the scientific veracity of the actual statement.” He denies the statement was a “criticism” of the forecasters, asserting instead that its aim was to “reconcile” their tweet with weather models that the White House pointed to as technically consistent with Trump’s tweet. In addition, he argues the statement could not have violated the integrity policy because it involved “no direct suppression or alteration of scientific findings.”

Concluding his defense, Jacobs writes that he “can accept the critique and criticism contained in the report,” and concurs that NOAA’s integrity policy requires clarification and updating to cover additional types of communication, but adds,

Any findings of misconduct … must be based on an objective application of the standards contained in the actual policy. 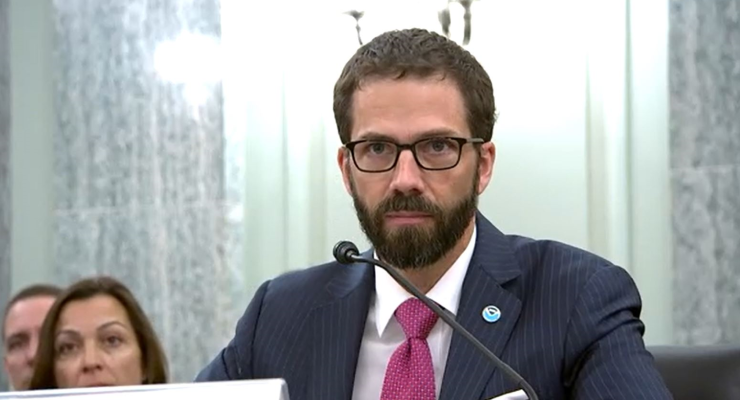 Neil Jacobs at a Senate Commerce, Science, and Transportation Committee hearing in March on his nomination to lead NOAA.

NOAA’s official response to the NAPA report was written by satellite program head Steve Volz, who had no direct connection to the events last September. The response endorses all the report’s findings and recommendations, while noting that the report did not extend its inquiry to officials at the Commerce Department involved in crafting the September statement. While the department’s inspector general is still conducting a parallel inquiry, Volz’s response recommends the department establish its own scientific integrity policy, covering both career officials and politically appointed leaders.

Concerning the report's conclusions, the response affirms that NOAA’s integrity policy “applies equally” across all kinds of agency communications. It also observes that Jacobs and others had tried to push back against “significant external pressure” from the Commerce Department. It relates that Jacobs “recommended, at two different points, that the reference to the [forecast office] be removed — an edit that, if accepted, may have avoided the policy violation.”

McLean, who promised an investigation of the statement shortly after its release, wrote in his response that he was disappointed the NAPA report recommended no penalties. While the report notes that McLean and others conveyed to the panel that Jacobs “sounded very depressed and appeared to be under great stress” during the controversy, McLean argues the pressure on Jacobs should not be considered a mitigating factor. He writes,

While there may be found causes of sympathy for the oppressed and meek subordinates of domineering autocratic ogres, I hardly can find sympathy in this scintilla of an argument for clemency. If not the single highest person in NOAA, who will stand for the Scientific Integrity of the agency and the trust our public needs to invest in our scientific process and products?

He added, “Part of that integrity is knowing when to say no, and be prepared to walk away.”

Meanwhile, Jacobs’ nomination to lead the agency is still pending in the Senate. At a meeting held to advance his nomination in May, Senate Commerce, Science, and Transportation Committee Ranking Member Maria Cantwell (D-WA) said she would decide whether to vote for him on the Senate floor based on the findings of the Commerce Department inspector general’s investigation. She remarked, “While I agree that this agency needs a permanent leader, I also believe we need to find all the facts regarding the performance and suitability of Dr. Jacobs.”

In the House, the Science Committee is conducting its own investigation, though it has been stymied in its attempts to probe the Commerce Department’s role in the controversy. In a statement on June 17, Committee Chair Eddie Bernice Johnson (D-TX) argued that department officials should also be held accountable, writing, “It is imperative that we have the full story so we can ensure that all National Weather Service forecasts, including hurricane forecasts, are issued in a timely and accurate way.”