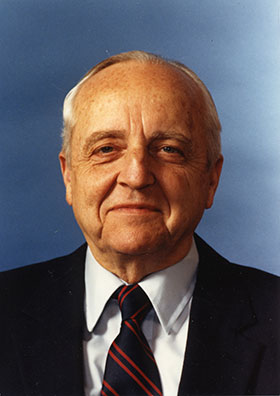 Koch served the physical science community for more than 75 years -- from WWII to the digital age.

Koch worked on research for Enrico Fermi in supporting the Manhattan Project in 1944 and assisted members of the Allied forces bomb squads on defusing German bombs by using high-energy X-rays to look inside the casings. After the war, Koch became the chief of the high energy radiation section of the radiation physics division at the National Bureau of Standards in 1949, eventually becoming the chief of the entire division in 1962.

He joined AIP in 1966 as executive director of the institute while it was headquartered in New York City. Koch became heavily involved in moving physics publications into the computer and digital era during his 21 years at the helm of AIP.

“As communication technology was rapidly advancing into the digital age, AIP needed to evolve with it,” said Michael Moloney, CEO of AIP. “Dr. Koch was a leader with the vision and foresight to improve how AIP publications reached an ever widening and knowledgeable audience at a time when communication was changing. His leadership also laid important groundwork in deepening the relationship with AIP’s member societies.”

In an oral history interview for the Niels Bohr Library at AIP, Koch said he felt his move to AIP in the mid-1960s was an opportunity to make a significant contribution on the national level to the physics community.

“The fascinating thing at AIP is this question of how physicists communicate. How do you really pass information back and forth? How does an idea get generated and where does it go?” Koch said in a 1986 interview. “Everything is being re-evaluated in terms of electronic means, and how physicists communicate electronically, rather than by printed journals and printed books.”

He said he wanted to provide physicists and physics societies with improved support services through grant programs, research into physics communication and expansion of information distribution to Japan. He felt AIP, as a membership corporation, played an important role in developing relationships with member societies and an important, supportive role for the physics community.

“We don't regard individual physicists as really being our members, but in principle, they are members through the societies,” Koch said. “AIP's prime members are our societies, and we are here to serve those societies. That's where the strength of AIP has been and will be.”

Koch was born in New York City on Sept. 28, 1920. He completed his undergraduate education at Queens College in New York City, earning a Bachelor of Science degree in 1941.

He went on to earn his Master of Science and doctorate degree in physics from the University of Illinois in 1942 and 1944, respectively.

Koch was a member of many committees and societies, including the American Physical Society, National Committee on Radiation Protection and Phi Kappa Phi. During his retirement, he enjoyed giving scientific lectures to the general public.

In addition to his parents, Koch was preceded in death by his wife, Becky Koch; his sister, Betty Kofoed; and his daughter-in-law, Deborah Koch. He is survived by his five children, 11 grandchildren and 17 great-grandchildren.