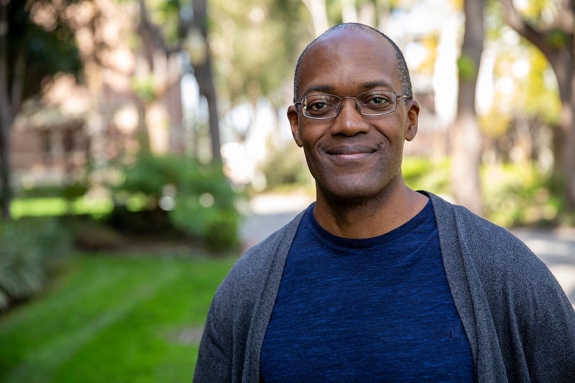 WASHINGTON, Dec. 7, 2022 – AIP announced physicist Clifford V. Johnson as the winner of the 2022 Andrew Gemant Award "for portraying the humanistic dimensions of physics to the public through a creative array of artistic, performance, and educational methods."

The annual prize recognizes the accomplishments of a person who has made significant contributions to the cultural, artistic, or humanistic dimension of physics. In addition to a $5,000 prize, $3,000 is allotted to an educational institution of the winner's choosing. Johnson chose to gift the award to a Los Angeles elementary school and their annual science fair, where students, parents, and community members participate in physics demonstrations and experiments.

"Dr. Johnson combines science and culture in an exceptional and inspirational way, and we are pleased to honor that with the 2022 Andrew Gemant Award," said AIP CEO Michael Moloney. "His science communication work is wide-ranging and has surely inspired many people to take an interest in physics and the scientists behind our field."

As a professor of physics and astronomy at the University of Southern California, Johnson aims to put science back into the broader culture.

"I believe that physics, and science more generally, is a wonderful and liberating aspect of our human culture. It is part of how we make sense of the world and our place in it, and ultimately how we shape it and extract resources from it," he said. "To neglect the human dimension of that risks the whole enterprise. We lose perspective on what we are doing with the knowledge and the understanding we gain from the science, and we also lose full appreciation and delight in how the science benefits all of society."

To accomplish this, Johnson works with creators in entertainment as a science advisor for movies, television shows, books, comics, theater plays, and other arts.

"Sometimes just a little bit of a scientific idea in a movie that reaches hundreds of millions of people can inspire them to find out more," he said. "Moreover, I encourage filmmakers to improve and diversify the portrayals of scientists seen on screen – literally humanizing them – which also has a strong and lasting impact."

Johnson has also combined contemporary scientific ideas with his own narrative art in a groundbreaking nonfiction graphic novel, "The Dialogues: Conversations about the Nature of the Universe," published worldwide in multiple languages.

"The idea was to show how to broaden the kinds of books about science that are available to the public," he said. "Visual narratives on the page are an incredibly powerful tool that can be used to reach and engage more people, including those who might not want to read the more traditional kind of science book."

Johnson hopes this work will make science more accessible and contribute to a dramatic increase in the number of scientists from underrepresented groups. He shares this objective with AIP and its Member Societies, who are actively working to increase diversity in STEM with initiatives like TEAM-UP Together.

"There are a lot of global and local problems to solve, in which science will be central, and it makes no practical or moral sense to be only using a small portion of the creativity out there," he said.

As a child, Johnson loved finding the answers to basic questions about the universe. That curiosity led him to pursue education and ultimately a career in physics and astrophysics in the United Kingdom and United States. He was admitted to Imperial College London for an undergraduate degree in physics and the University of Southampton for a doctorate in theoretical physics. He was a postdoctoral member of the School of Natural Sciences at the Institute for Advanced Study in Princeton, New Jersey. He has also served as a visiting research fellow and lecturer at Princeton University, and a postdoctoral research associate at the University of California, Santa Barbara. Following that, Johnson had assistant professor and professor appointments at the University of Kentucky and University of Durham, respectively, as well as a year as a Presidential Visiting Scholar at Princeton. He has been a professor in the Theoretical High Energy Physics group at the University of Southern California since 2003.

In his research, Johnson explores how gravity works at the quantum level. The full understanding of objects like black holes, and even the origin of the universe itself, depends on tying quantum mechanics and gravity together with theory and experiments. Johnson develops solvable but instructive models of quantum gravity that might reveal lasting insights into how black holes work and how space-time emerges from something deeper.

"AIP understands the need for both research and communicating science, and so to receive the Andrew Gemant Award is a great honor," he said.