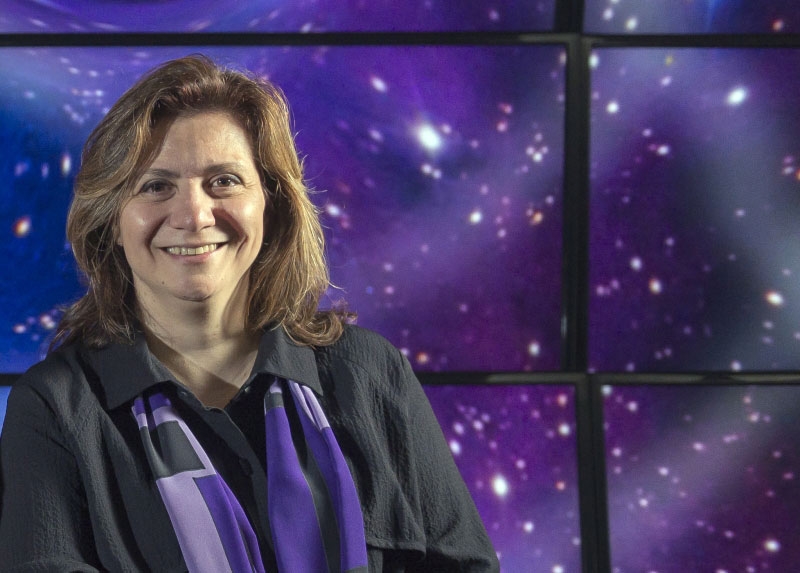 AIP and AAS will present Vicky Kalogera with the 2018 Dannie Heineman Prize for Astrophysics for her work studying compact objects -- black holes, neutron stars and white dwarfs -- in astrophysical systems.

WASHINGTON, D.C., January 10, 2018 -- On behalf of the Heineman Foundation, the American Institute of Physics (AIP) and American Astronomical Society (AAS) congratulate Vicky Kalogera of Northwestern University in Evanston, Illinois, for being named recipient of the 2018 Dannie Heineman Prize for Astrophysics.

Kalogera’s citation reads: “for her fundamental contributions to advancing our understanding of the evolution and fate of compact objects in binary systems, with particular regard to their electromagnetic and gravitational-wave signals.”

Kalogera became intrigued with astrophysics as an undergraduate physics student in Greece. “Astronomy really struck a nerve with me, and I became obsessed with it,” she said. As a doctoral student, Kalogera chose to focus on black holes and neutron stars; she has since spent her career pursuing compact objects as a broad research area.

Over 20 years ago, Kalogera’s dissertation advisor, Ron Webbink at the University of Illinois at Urbana-Champaign, first piqued her interest in gravitational-wave sources. Kalogera’s postdoctoral mentor at Harvard University, Ramesh Narayan, further supported this interest, suggesting work on the question of how often neutron-star coalescence events occur, a topic she advanced with predictions, now confirmed with the latest gravitational-wave detection of two neutron stars colliding.

“Compact objects are basically dead remnants of regular stars,” Kalogera said. “We describe our Sun as ‘alive’ star because it burns fuel at its center. But once a star burns all of the nuclear fuel it can consume, it runs out of its life source, its core collapses, its outer layers disperse into interstellar space, and the star ‘dies.’”

Kalogera explains that black holes form when “stars that are 20 to 30 times more massive than our Sun end up collapsing to the point where gravity basically wins altogether and compacts everything into their center.”

Neutron stars form from less massive stars but still have enormous mass within a tiny volume. “A neutron star is approximately 10 miles across, and its mass is as much as the whole Sun or a little more,” Kalogera said. “Such a remnant is highly compact, which means that the matter is being squeezed to unprecedented densities -- which don’t exist on Earth or even at the center of the Earth. So these are conditions that we can’t study in the lab.”

By studying compact objects in astrophysical systems, Kalogera looks to understand how matter behaves under the unprecedented high-density and high-pressure conditions. “We can do this through X-ray astrophysics, radio-pulsar astronomy, high-energy gamma-ray emission, and now via gravitational waves thanks to the new LIGO-Virgo observations,” she said.

During the past two years, LIGO, and more recently Virgo, detected a number of pairs of black holes that merged to form single black holes. “We have some basic ideas about how pairs of black holes actually form, but we don’t know which of these ideas are correct or more dominant,” Kalogera said. “We’re trying to put the pieces of the puzzle together to reveal the evolutionary history of these binary black holes.”

Similarly, the most recent big discovery with LIGO -- the binary neutron star merger, which opened up multi-messenger astronomy with gravitational waves -- has revealed new questions to astronomers like Kalogera in the form of observations that don’t fully make sense. “Now we’re trying to figure out what’s going on when two neutron stars crash into each other, and we need both gravitational waves and electromagnetic waves to do it,” she said.

This work can help demystify some of the universe’s secrets by revealing how gravity behaves, because nothing is more dominated by gravity than a black hole. “This gave us the opportunity, for the first time -- solely through gravitational waves because black holes don’t emit electromagnetic waves -- to test the fundamental predictions of Einstein’s general theory of relativity,” said Kalogera.

These fundamental questions offer insight into the nature of gravity. “Figuring out how black holes, these hard-to-probe objects, actually form in nature is a key question in astrophysics,” Kalogera said. “And probing the dense matter of neutron stars -- the kinds of pressures and densities that we can never reproduce in a regular lab -- is also of prime importance in astrophysics.”

Vicky Kalogera is the co-founder and the current Director of the Center for Interdisciplinary Exploration and Research in Astrophysics (CIERA) and the Daniel I. Linzer Distinguished University Professor in the Department of Physics and Astronomy in the Weinberg College of Arts and Sciences at Northwestern. Kalogera received her Ptihio (B.S.) in physics in 1992 from the University of Thessaloniki in Greece and her Ph.D. in astronomy in 1997 from the University of Illinois at Urbana-Champaign. She then joined the Harvard-Smithsonian Center for Astrophysics as a CfA Postdoctoral Fellow and in 2000 was awarded the inaugural Clay Postdoctoral Fellowship. Kalogera was appointed Assistant Professor at Northwestern University in 2001 and was named the Erastus Otis Haven Professor of Physics and Astronomy in 2009 (until 2017). Find out more about Kalogera’s work on her research web page and on the Northwestern website: https://sites.northwestern.edu/vickykalogera/

The Heineman Prize is named after Dannie N. Heineman, an engineer, business executive, and philanthropic sponsor of the sciences. The prize was established in 1979 by the Heineman Foundation for Research, Education, Charitable and Scientific Purposes, Inc. Awarded annually, the prize consists of $10,000 and a certificate citing the contributions made by the recipient plus travel expenses to attend the meeting at which the prize is bestowed.

The American Astronomical Society (AAS, aas.org), established in 1899 and based in Washington, DC, is the major organization of professional astronomers in North America. Its membership (~8,000) also includes physicists, mathematicians, geologists, engineers, and others whose research and educational interests lie within the broad spectrum of subjects comprising contemporary astronomy. The mission of the AAS is to enhance and share humanity's scientific understanding of the universe, which it achieves through publishing, meeting organization, education and outreach, and training and professional development.