On the road with Heisenberg

After the defeat of Germany in 1945, ten German scientists and engineers were interned at an English estate, Farm Hall, for over six months to find out how close the Third Reich had come to the development of a nuclear weapon. Werner Heisenberg, Otto Hahn, Max von Laue, Carl von Weizsäcker, and the others were housed, fed, and given the opportunity to talk among themselves—all the while being secretly recorded. Although most of those recordings were lost and the original shellac disks destroyed, transcripts of some of those conversations were made for British intelligence and ultimately sent to General Leslie Groves in the United States. They were declassified and released in 1992. 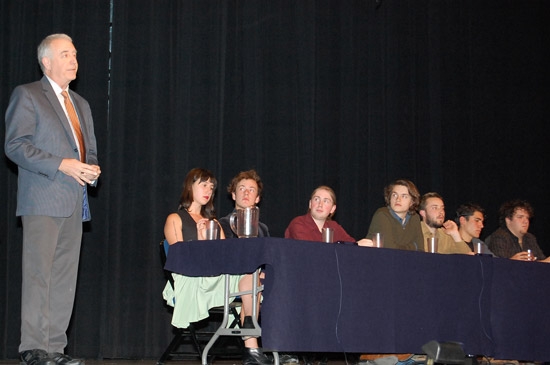 On May 7, as part of the L.S. Trimble Science Heritage Lecture Series, AIP sponsored a staged reading of a play inspired by these transcripts in Santa Fe, NM. The playwright is historian of physics David Cassidy, who is the 2014 recipient of the APS Abraham Pais Prize for History of Physics. Cassidy’s play, “Farm Hall,” has had two previous public readings, including one at the 2013 APS April Meeting in Baltimore. It will also see a limited-run stage production in New York this summer. Cassidy is best known for his scholarly biography of Heisenberg, Uncertainty: The Life and Science of Werner Heisenberg (1993), which won both the Pfizer Award of the History of Science Society and the AIP Science Communication Award. He has also published a popular biography of Heisenberg, books about J. Robert Oppenheimer, and a history of 20th-century physics.

Our thanks go out to Peter Pesic, who recruited the actors, and to Brian Schwartz, incoming chair of the APS Forum on the History of Physics. Their efforts were invaluable in bringing about this event. The impressive cast comprised student actors from St. John’s College in Santa Fe, several of them freshmen. Rory Gilchrist, a St. John’s student himself, directed the reading and played the British army officer charged with chaperoning the German scientists. Evan Coral played Heisenberg, Anthony Risolio II played von Weizsäcker, Jamison Gilmour played Walter Gerlach, Zachary Thomas played Kurt Diebner, Conner Groat played Otto Hahn and Samuel Goudsmit, Jane Vick played Elisabeth Heisenberg, and Brett Ethridge was the voice of the BBC reporter who announced the explosion of the atom bomb over Hiroshima. They managed a superb performance on top of finishing the requirements of the academic year! 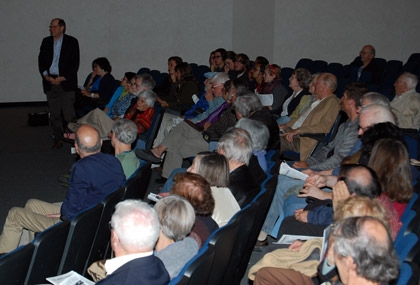 After the play, the audience asked many questions: about Heisenberg, about events during and after the war, and about the process of the historian turned playwright. As a historian, Cassidy has dedicated most of his career to getting the facts straight and telling the stories of physics faithfully and in detail. But that does not make good drama. Drama needs character, conflict, and catharsis. He referred to Aristotle’s theory of drama as shaping his own transition. Characters in drama must be good, appropriate, realistic, and consistent. That leaves room for invention not allowed in history. Hence, conversations may be shifted in chronology in a play and sometimes may even be shifted from one person to another if it adds to the story. Historians don’t have that freedom. No matter how much creativity the playwright exercises, however, the story and the characters must ring true. Heisenberg is still Heisenberg. Diebner is still Diebner. And the bomb was still developed by the Manhattan Project and not by the Germans.

The night after the performance, AIP held a reception for some of Santa Fe’s and Los Alamos’ many supporters of the AIP History Programs. Under the guidance of our Chief Development Officer, Richee-Lori Smith, and the Physics Resource Center’s Development Board, AIP has launched its two-million-dollar “Physics Heritage & Promise” campaign. As part of this campaign, we are getting to better know our many friends and supporters around the country. Taking this play “on the road” allowed us to highlight the Trimble lecture public outreach effort. We thank Development Board member Ruth Howes and her husband Bob for opening their century-old adobe house to us and hosting this reception. We also thank former AIP Governing Board Chair Hans Frauenfelder for his welcoming remarks, personal stories, and warm support of AIP’s History Programs and this campaign to fully endow critical elements of these programs.

More news about the Physics Heritage & Promise development campaign will appear in later issues of AIP Matters. The reading of “Farm Hall” and the reception in Santa Fe have set a high standard for future events.