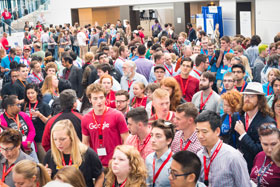 Four years of hard work by the SPS and Sigma Pi Sigma National Office and over 100 volunteers came together this month at the Sigma Pi Sigma 2016 Quadrennial Physics Congress, also known as PhysCon. This year’s PhysCon took place in San Francisco and the Silicon Valley, marking the latest of a long line of congresses hosted by Sigma Pi Sigma. Congresses have played an integral role in the development of Sigma Pi Sigma as an honor society, and, while the meeting has evolved over the years, one of its core purposes has stayed the same: to provide direction and vision to Sigma Pi Sigma. With over 1,200 attendees, over 340 poster presenters, 15 art submissions, eight workshops, and an evening dance party, this year’s PhysCon was a resounding success.

The first congress was held in 1928 at Davidson College in North Carolina, and six chapters attended. They elected national officers, including Marsh White, who became a lifelong active participant in Sigma Pi Sigma. In 1934, the third congress was held at the University of Kentucky, attended by 19 chapters. During this congress, Sigma Pi Sigma transitioned from a fraternity to an honor society and set the standard that membership was dependent on academic excellence. In 1967, a special congress saw 90 chapters vote to merge Sigma Pi Sigma with the American Institute of Physics, a move that gave birth to the Society of Physics Students.

In 1992, Sigma Pi Sigma hosted the first congress in 25 years in Dayton, Ohio. This is often referred to as the first modern congress. The primary reason that congresses restarted was to determine the feasibility of a 75th anniversary celebration in 1996. Based on the success of the 1992 meeting, plans moved forward with meetings subsequently held in Atlanta; College Park; Albuquerque; Batavia, Illinois (Fermilab); and Orlando. The 2012 Congress in Orlando was built around the theme “Connecting Worlds Through Science and Service.” More than 800 attendees enjoyed a kick-off tour of NASA’s Kennedy Space Center and heard from science luminaries including Freeman Dyson and 2006 physics Nobel laureate John Mather. The meeting also included the first dance party, a tradition continued at the 2016 Congress and kicked off with a first dance by AIP CEO Robert G.W. Brown.

Each congress helps guide the next, and the theme developed for the 2016 Congress, “Unifying Fields: Science Driving Innovation,” fed off the energy and direction of 2012. Those gathered this year in California were polled to help inform the SPS National Council as they decide the theme for the next PhysCon. (Theme, date, and location are still being finalized.) 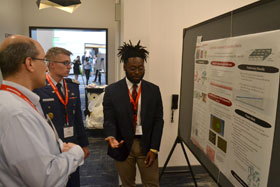 PhysCon has become the largest meeting geared toward undergraduate physicists in the United States. The program brings together undergraduate and graduate physics students, faculty, alumni, research mentors, and other supporters to hear from world-renowned scientists, engage in interactive workshops, and build personal networks that will last a lifetime. Specifically, this year attendees were treated to six plenary talks, eight workshops, three poster sessions, an art contest, tours of local science and technology sites, networking opportunities, and an exhibit hall packed with graduate school representatives, physics professional societies, and other organizations. These events provided an atmosphere for attendees to grow and develop as members of the community, as well as providing important guidance and feedback for the future of Sigma Pi Sigma and SPS.