This week, Vice President Biden presented an implementation plan for the administration's Cancer Moonshot Initiative and advocated for a culture shift toward more team-oriented, interdisciplinary research that leverages shared datasets and draws on expertise from a broader range of federal agencies, including the Department of Energy. 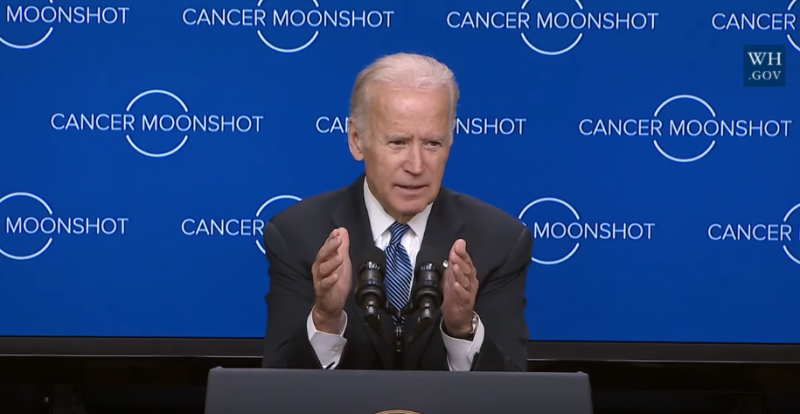 On Oct. 17, Vice President Joe Biden submitted an implementation plan for the Cancer Moonshot Initiative to the president. President Obama announced the initiative during his final State of the Union speech and asked Biden – whose oldest son died of brain cancer in May 2015 – to lead the effort.

At the report rollout event, Biden summarized the task force’s efforts and expressed his optimism in the prospects for near-term breakthroughs in cancer research. Noting that an overarching goal of the initiative is to make ten years of progress in five years, Biden stated that the effort has already instilled the research community with a sense of urgency.

Biden also reflected on how far cancer research has come since President Richard Nixon declared a “war on cancer” in 1971, while lamenting that certain research practices from Nixon’s era have persisted too long. “Too often our cancer culture and system plays by the rules of ’71, not 2016,” he said, later adding, “There was no need for team science in 1971. There wasn’t much data to share in 1971.”

He proceeded to present a vision of a research culture in which scientists are more receptive to sharing and analyzing huge datasets, leveraging multiple disciplines, and incorporating additional federal agencies, such as NASA and the Department of Energy. Among the actions highlighted in the report are the establishment of partnerships between the National Cancer Institute and both DOE and NASA. The intent of these pairings is to leverage DOE’s supercomputing capabilities and NASA’s radiation research expertise.

The report also notes the importance of establishing deeper relationships with the private sector and academia. One such effort is being led by the National Photonics Initiative (NPI), an alliance of scientific societies and industry groups focused on identifying and fostering important new areas of photonics research. (The American Physical Society and the Optical Society, both AIP Member Societies, are founding members of the NPI.) In support of the moonshot initiative, the NPI released a technology roadmap in June 2016 focused on developing enhanced methods for cancer detection and treatment that leverage techniques such as image-guided biopsies and image-based tumor phenotyping.

Toward the end of his speech, Biden reflected on the importance of maintaining a spirit of optimism. “It disturbs me that for the first time in my career, over the last decade, some of the American people are no longer of the view that we can do anything,” he said. “Well we can do virtually anything … Within the next five to six years we’ll be calculating a billion billion calculations per second. What was it 10 years ago? We are on the cusp of so many just enormous breakthroughs, your children are going to see more progress in the next 15 years than have happened in the last 50 years.”

He went on to invoke the famous passage from President John F. Kennedy’s 1962 speech on the goal of landing humans on the moon within the decade. However, he emphasized a less frequently quoted clause in which Kennedy refers to the challenge of going to the moon as “one that we are unwilling to postpone.” Biden concluded, “That’s where we are today in cancer with the moonshot.”

The moonshot report comes at a time when DOE has been actively considering ways to collaborate more with the National Institutes of Health. In particular, last November Energy Secretary Ernest Moniz directed the Secretary of Energy Advisory Board to establish a task force charged with identifying new areas of DOE-supported research that could accelerate progress in biomedical sciences and new mechanisms to bring together DOE and NIH researchers.

Steven Koonin, a former undersecretary for science at DOE, and Harold Varmus, a former director of both NIH and NCI, co-chaired the task force, which issued its final report this September. The task force recommends that the two agencies (1) periodically establish “problem-oriented” and “technology-oriented” panels of scientists to define joint research programs, (2) create organizational and funding mechanisms that support cross-agency assignments, summer workshops, and joint training programs, (3) secure funding for one or more joint research units or research facilities, and (4) better inform the White House, Congress, and the public about the benefits of such efforts.

The report’s final passage reflects on the challenges and opportunities of increasing DOE-NIH collaboration:

The predominantly mission-driven culture of DOE, dominated by team science and by physics and engineering will not mix easily with the disease-oriented culture of NIH, dominated by grants to individual investigators. However, it is encouraging that the cultures of each agency are not monolithic.

For example, DOE does (and will no doubt continue to) support some single-investigator work, and NIH does support multi-user capabilities like NCBI [the National Center for Biotechnology Information] (part of the National Library of Medicine) clinical trials, and genomics projects. The recently announced national BRAIN and Cancer Moonshot initiatives provide valuable incentives and venues for greater interagency cooperation.

And, then there will be the understandable pressure to keep the individual agencies focused on their separate historical missions. But, failure to address these challenges will, in our opinion, leave far too many opportunities unrealized in the national effort to accelerate progress in the biomedical sciences.