After declining to take up the contentious America COMPETES bill which the House passed narrowly last spring, the Senate appears close to releasing its bipartisan take on the bill.

The Senate had been mostly quiet on the subject of COMPETES until this month, when the Commerce, Science, and Transportation committee convened a hearing to discuss the future of the federal role in supporting research and development (R&D). This hearing represents the only time the committee has met in open session to discuss R&D policy since a 2014 hearing was held as part of a previous attempt to reauthorize the America COMPETES Act—one of the primary legislative vehicles for science and technology policy in recent years.

This month also marks just over one year since the House passed its version of a COMPETES reauthorization bill. Since then, the Senate has not indicated any desire to pick up the House’s bill, which the chamber passed on a mostly party line vote after a series of contentious hearings. 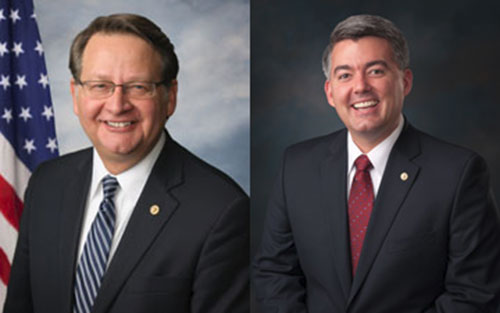 Instead, the Senate opted to take a more bipartisan approach, launching an “Innovation and Competitiveness Working Group” last July, led by Sens. Gary Peters (D-MI) and Cory Gardner (R-CO). In the following months, the working group held a series of three closed-door roundtables focused on basic research, STEM education, and technology transfer to inform their drafting process. Initial reports suggest that the Senate will begin consideration of its COMPETES bill in early June.

Testifying at the Senate hearing were Kelvin Droegemeier, former vice chair of the National Science Board; Jeannette Wing, corporate vice president for research at Microsoft; Robert Atkinson, president of the Information Technology and Innovation Foundation; and David Munson, dean of the University of Michigan College of Engineering.

The tone of the hearing was largely positive, although anyone in the audience hoping for the committee to embark on a science budget doubling campaign like those of years past would have had their hopes dashed. Committee Chairman John Thune (R-ND) was quick to set expectations in his opening statement:

While we could hope for more resources, tough budget realities underscore the importance of developing policy solutions that maximize our federal investments so we can stay competitive, get the biggest bang for our buck, and leverage even more private sector resources to expand the reach of our R&D.

Indeed, much of the hearing focused on how the federal government should decide what types of R&D to support rather than how best to allocate a hypothetical increased amount of spending. Other topics discussed included how to reduce administrative burden, better match STEM job demand and supply, increase retention of students in STEM majors, improve technology transfer from universities and the national labs, and distinguish healthy competition from duplicative research.

Overall, the hearing’s collegial tone was one of the main takeaways. Droegemeier thanked the committee for its bipartisan approach:

This committee has already addressed one of the greatest long-term threats to American innovation: You’ve made science bipartisan again, countering rhetoric that has at times made the research community feel under siege.

Despite the focus on better leveraging current federal dollars, some did advocate for specific funding increases. Wing, who served on a study panel which produced the report Restoring the Foundation (in many ways a successor to the oft-cited Rising Above the Gathering Storm report), reiterated the panel’s call for Congress to increase basic research funding by four percent per year. In support of this figure, she noted that between 1975 and 1992 federal investment in basic research grew at an average inflation-adjusted rate of 4.4 percent per year despite economic difficulties during that period.

Munson took a different tack, arguing that low agency funding levels lead to high proposal rejection rates which in turn force researchers to submit many more proposals to obtain funding. “This proliferation of research proposals is bogging down the system,” he said. Given that many meritorious proposals are being rejected, he proposed that a budget sufficient to fund closer to 33 percent of National Science Foundation (NSF) grants as opposed to the current rate of around 20 percent would be warranted.

After noting that as much as half of the U.S.’s economic growth over the last 50 years is attributable to advances in science and technology, Peters also called for steady R&D increases: “Experts … agree that modest, sustained, and predictable increases in federal R&D investments are critical to ensuring the economic competitiveness of the United States moving forward.” He later gave a speech on the Senate floor advocating for Congress to raise federal R&D spending from the current level of just under 0.8 percent of gross domestic product to 1 percent.

Prioritization or picking ‘winners and losers’?

Thune’s first question focused on what the government should do to better manage and prioritize its portfolio of research investments. Droegemeier described the process as a “team sport” in which input from the scientific community is combined with national needs defined by the White House. He also noted that NSF just went through a major strategic planning exercise which generated a set of nine potential areas for the foundation to focus on in the coming decades.

Sen. Jerry Moran (R-KS) posed a more pointed question about prioritization: “Is all federal research of equal value or priority, and I know the answer to that can’t be yes but also I think probably politically it can’t be no,” he asked. Atkinson, who throughout his testimony advocated for increased federal funding for research commercialization, argued that certain types of research are more likely to have a larger economic impact and should be prioritized.

He was also critical of universities for not doing more to support national interests. He then asserted that programs such as NSF’s Industry/University Cooperative Research Centers Program, which currently receives about two percent of the foundation’s budget, are a great means of better aligning university research with national interests and are worthy of additional funding.

Sen. Ed Markey (D-MA) pushed back on the idea of policymakers playing a greater role in setting research priorities. He cited the House COMPETES bill as an example of politicians picking “winners and losers” by favoring certain scientific disciplines at the expense of others, namely the geosciences and social sciences. After arguing that projects which require decades of public investment before demonstrating a payoff—such as the LIGO experiment—are susceptible to characterization as “loser” science, Markey concluded by quipping “’Congressional expert’ is an oxymoron, just like jumbo shrimp or Salt Lake City nightlife.”