The Strategic Forces Subcommittee of the House Armed Services Committee held a hearing this week on aging facilities and deferred maintenance within the National Nuclear Security Administration.

On Sept. 7, the Strategic Forces Subcommittee of the House Armed Services Committee held a hearing on deferred maintenance at the laboratories and production facilities administered by the National Nuclear Security Administration. As reported in FYI #28, the status of the nation’s nuclear arsenal received a great deal of attention early in the year from several congressional subcommittees. On July 14, the Strategic Forces Subcommittee renewed that attention, dedicating a full hearing to the military’s requirements for stockpile modernization. The subcommittee’s current hearing moves the discussion from high policy down into the everyday realities of bricks and mortar.

In August 2015, a Government Accountability Office report noted that a large backlog in deferred maintenance projects at NNSA facilities was likely to grow larger in coming years. This year’s budget request for NNSA reports that the backlog totaled nearly $3.7 billion as of fiscal year 2015, and asks for funds to “arrest growth in deferred maintenance.” However, Rep. Mike Rogers (R-AL), chairman of the Strategic Forces Subcommittee, is pledging to drive a more aggressive response to the problem, calling the risks that infrastructure decay currently presents to the nuclear security enterprise “completely unacceptable.”

Rep. Mike Rogers (R-AL) displayed photos of crumbling infrastructure at NNSA facilities at the hearing and on his Twitter feed. Here concrete has fallen from the ceiling at the Y-12 National Security Complex in Oak Ridge, Tenn. (DOE image courtesy of Rep. Mike Rogers)

In his opening testimony, NNSA Administrator Frank Klotz agreed that the deferred maintenance is a pressing problem, calling a permanent solution “long overdue”:

While much has been accomplished over the past two decades to construct the new experimental facilities and high-performance computing capabilities required to certify annually the nuclear weapons stockpile without nuclear explosive testing, investment in infrastructure has generally not kept pace with the growing need to replace Cold War-era facilities. I can think of no greater risk to NNSA’s multiple and vital missions than the current state of our aging infrastructure.

He recognized, though, that infrastructure is not a subject that commands rapt attention, remarking, “Although the role of nuclear weapons in our national security strategy is widely understood and enjoys broad, bipartisan support, the link between nuclear deterrence and the infrastructure that supports it is less well appreciated.”

Indeed, amid the current rush to complete other legislative business before the pre-election recess, only a few subcommittee members chose to attend this hearing. 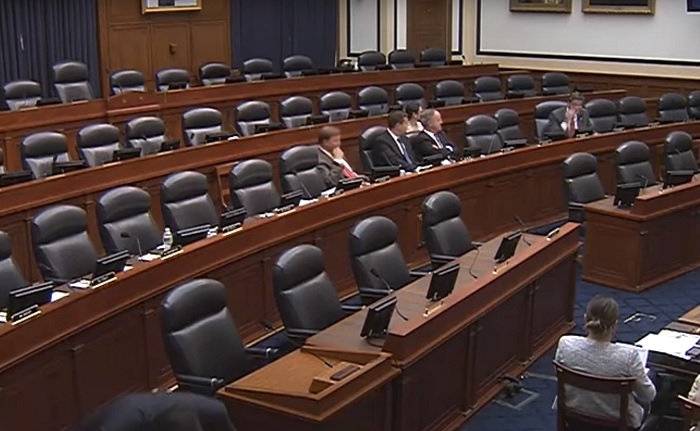 The subcommittee members who did attend the hearing explored the burdens imposed by aging facilities and deferred maintenance, including but not limited to workplace safety. One witness, Morgan Smith, president and CEO of Consolidated Nuclear Security, LLC—which manages NNSA’s Pantex plant near Amarillo, Texas, and the Y-12 facility in Oak Ridge, Tenn.—noted that unsafe conditions cause disruptive restrictions on the use of facility space. Charlie McMillan, director of Los Alamos National Laboratory (LANL), pointed to the threat that faulty air conditioning and heating poses to computers and sensitive scientific equipment.

McMillan also observed that old facilities are especially difficult and expensive to maintain. John Ricciardelli, president of Honeywell Federal Manufacturing & Technologies—which manages the Kansas City National Security Campus—reported that the organization’s recent move from the 70-year-old Bannister Federal Complex to a new, leased facility has eliminated $120 million in annual facility costs plus $238 million in deferred maintenance and emergency repair costs. (NNSA’s budget request for fiscal year 2017 asks for funds to support the transfer of the Bannister facility to a company that will handle remediation and sale of the site.)

Replying to a question from Rogers about deferred maintenance’s impact on staff recruitment, McMillan testified that LANL is placing some new personnel in trailers with collapsing ceilings, which, among other facilities shortcomings, severely hampers the laboratory’s ability to compete for people with doctoral and master’s degrees in fields such as physics, chemistry, and engineering. He remarked:

I’ve had some of them to my house for dinner, and [they told me] they’re appalled. When their comparison is what’s happening in Silicon Valley, we aren’t even in the same league. Now, maybe we shouldn’t be in the same league with Silicon Valley, but at least it ought to be a safe and—let me say it this way: we are hiring the next generation of the stewards of the stockpile today. … We need space that’s worthy of their service to the country.

Rogers pressed witnesses to admit that, without dedicated funding, NNSA’s backlog of deferred maintenance would never be resolved. In discussion with McMillan about LANL’s efforts, he remarked:

You’re being overly optimistic if you think that we’re going to be able to address this. I understand it’s your job to be optimistic. It’s my job to be realistic, and I’m very frustrated—and this is the Congress’s fault, not yours—that the Congress has not more aggressively tried to get ahead of these maintenance issues.

For his part, Klotz agreed that, without dedicated funding, maintenance would never be prioritized. He observed that the situation is similar to what he had encountered as a high-level Air Force officer:

Rogers, McMillan, and James McConnell, NNSA associate administrator for safety, infrastructure, and operations (a recently established position), all pointed to successful experience with NNSA’s $2 billion Facilities and Infrastructure Recapitalization Program (FIRP), which was completed in 2013.

Beyond funding, witnesses also testified that careful and innovative management could lead to savings and improved maintenance planning. Rogers was particularly interested in the possibilities of public-private partnerships, which can leverage sources of financing and undertake certain kinds of transactions not available to government agencies operating on their own. Notably, Ricciardelli and McConnell testified that a public-private partnership will permit the government to secure a net savings of $500 million in disposing of the Bannister facility.

McMillan and McConnell also discussed the importance of NNSA’s ten-year site plans in formulating the agency’s overarching maintenance strategy. McConnell reported that the agency’s decision making is embracing management frameworks that allow it to better balance short-term programmatic demands against long-term infrastructure risks. He also reported that, in addition to the site plans, NNSA is formulating a Master Asset Plan, which is “five-eighths” complete and will integrate the agency’s various site plans at the enterprise level and extend the planning horizon out as far as 25 years.