During a House Science Committee hearing convened to examine the Department of Energy’s domestic and international fusion research programs, members asked pointed questions about the beleaguered ITER project and probed what the department could do to support additional approaches to fusion energy generation.

As Yogi Berra said, the problem with predictions is that you’re dealing with the future.

That aphorism, invoked by Rep. Randy Weber (R-TX) at a House Science Committee hearing on fusion held last month, encapsulates one of the hearing’s main themes: that predictions, especially about the future of fusion energy, are tricky business.

Despite its innocuous-sounding title, “An Overview of Fusion Energy Science,” the hearing was clearly convened in part to discuss the future of U.S. participation in the ITER fusion project. Indeed, first in line to testify before the subcommittee was Bernard Bigot, Director General of the ITER Organization. Also testifying were Steward Prager, Director of the Princeton Plasma Physics Laboratory, and Scott Hsu, a fusion scientist at Los Alamos National Laboratory, who focused their comments on potential future directions for the U.S.’ domestic fusion research program.

Bigot focused his testimony on describing the actions he has taken to reform ITER’s management processes and develop a “project culture,” the benefits the U.S. will derive by participating in ITER, and the importance of developing fusion to satisfy growing global energy demand without relying on fossil fuels. 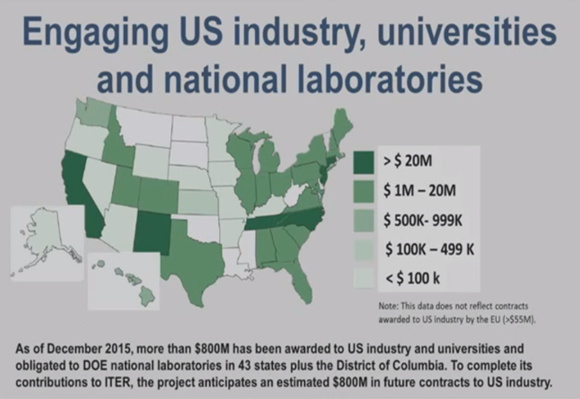 Bigot laid out his argument for why the U.S. should stay in ITER using a series of slides, pointing out that more than 80 percent of the U.S. contribution to date has gone to U.S. companies and labs.

The House has been more supportive of ITER than the Senate in recent years, prevailing over the Senate’s attempts to zero out funding for the project, and this hearing affirmed that key members of the House Science Committee still support the project. In particular, Weber, full committee chairman Lamar Smith (R-TX), and full committee ranking member Eddie Bernice Johnson (D-TX) all made strong statements in support of ITER. For example, Smith argued that it is important for the U.S. to invest in long-term projects such as ITER in his opening remarks:

We cannot say when fusion will be a viable part of our energy portfolio, but we should support this critical science that could benefit future generations. One major step toward achieving this goal is ITER. … The federal government should invest in long-term challenging science projects such as this, which will ensure America remains a world leader in innovation.

However, although committee members applauded the successful management reforms that Bigot has implemented since assuming leadership last March, some questioned the value and / or feasibility of the project and a few seemed frustrated about the tantalizing promise of fusion energy remaining out of reach for so long.

Weber, chairman of the Energy Subcommittee, was not the only one to joke about the difficulty of making predictions about fusion. “Fusion energy is often described as being 50 years away,” observed Rep. Barry Loudermilk (R-GA) with a slight smile. “I believe the joke is 30 years,” Prager corrected.

Rep. Alan Grayson (D-FL), ranking member of the subcommittee and a strong supporter of fusion, seemed puzzled at the slow pace of progress, saying,

We had a working, net energy-producing fission reactor before we actually had the first fission weapon detonated. … So now here we are, it’s been 64 years since the first fusion weapon was detonated, and we still don’t have a fusion reactor that produces net energy nor are we apparently close to it. What’s the problem, gentlemen?

Rep. Bill Foster (D-IL) also asked a series of pointed questions about topics ranging from the economic feasibility of producing electricity from an ITER-like reactor to the likelihood of the ITER design living up to expectations, drawing an analogy with debates that occurred over the design of the National Ignition Facility.

Although Grayson did not say he is opposed to the U.S. remaining a contributor to ITER, he did make clear his desire for the U.S. to explore additional avenues for fusion energy generation. He asked the witnesses to describe how the U.S. could achieve net energy generation from fusion more quickly and what a “Manhattan project for fusion” would involve.

Hsu advocated for pursuing additional fusion reactor designs alongside ITER because “we don’t know the answer right now.” Prager cautioned that there is “no one idea that’s a magic bullet that will deliver commercial fusion power in ten years,” but emphasized that there is plenty the U.S. could do to accelerate fusion energy development, including constructing a pilot fusion energy plant as well as pursuing less mainstream designs, as he outlined in his written testimony. Bigot argued that ITER is still the best path forward and made clear that the road ahead is still long. “It takes time,” he stressed.

Rep. Dan Lipinski (D-IL) asked whether or not the DOE Office of Science’s fusion program has “flexibility to shift resources to promising new approaches” other than the mainstream tokamak designs. Hsu replied, “At present, innovative concept development has no budget nor new proposal solicitations from DOE and I believe this omission should be addressed.”

In his written testimony, Hsu summarized the wide array of alternative approaches to fusion (see Figure 1) and noted that as recently as fiscal year 2010, DOE provided about $42 million per year to support development of some of these alternatives. In an addendum to his prepared statement, Hsu clarified his assertion that DOE appeared to terminate its support of innovative fusion energy concept development “without formal scientific review.”

The ITER project has been plagued by cost over runs and schedule delays. According to a 2014 report by the Government Accountability Office, the projected total U.S. monetary contribution to ITER ballooned from a 2005 estimate of $1.2 billion to a 2013 estimate of $3.9 billion. The projected completion date also slipped by 20 years.

Most recently, an independent review released at the end of April (after the hearing), concluded that ITER will likely need an extra $5.3 billion to begin experiments by 2025 and achieve ignition by 2032. Perhaps in part due to the timing of this review, Congress reportedly extended the deadline for DOE to submit its recommendations to Congress on whether or not the U.S. should continue to contribute to ITER from May 2 to May 12.

Foster observed that the increasing cost of ITER has “caused a lot of pain in the DOE Office of Science budget” and asked whether the U.S. withdrawing from the project would be a “fatal blow.” Bigot stressed that although the U.S.’ monetary contribution is important, losing U.S. industrial capacity and scientific expertise would be a “real drawback.”

At the end of the hearing, Foster reassured Bigot: “I want to be sure I don’t be seen as coming off not supportive of this project. I just want to understand the dimensions of the cliff we are playing near when we talk about the U.S. pulling out.”