This week, the House Science Committee held a hearing to investigate the firing of a Department of Energy scientist following a briefing that she and two other DOE scientists gave to congressional staff on the department’s Low Dose Radiation Research Program. Republican committee members linked the incident to what they allege is a larger “pattern of intentional misinformation from Obama Administration officials.”

On Sept. 21, the Oversight and Energy Subcommittees of the House Science Committee held a joint oversight hearing on the firing of Noelle Metting, who had been the head of the Department of Energy’s Low Dose Radiation Research Program.

At the hearing, committee Republicans worked to draw larger implications from the incident. They alleged that Metting’s firing stemmed from a DOE attempt to withhold information from Congress in order to derail legislation reversing DOE’s decision to discontinue Metting’s program.

The Republicans further asserted that this alleged manipulation of information is itself part of what Oversight Subcommittee Chair Barry Loudermilk (R-GA) called “a pattern of intentional misinformation from Obama Administration officials, ranging from FDIC to NIST to EPA — and now the Department of Energy.”

Metting clashed with superiors over briefing to congressional staff

Metting, one of two witnesses at the hearing, testified that her dismissal arose from a clash she had with two of her superiors at DOE: Todd Anderson, director of DOE’s Biological Systems Science Division, and Julie Carruthers, senior science and technology advisor in the Office of the Deputy Director for Science Programs. At issue was a briefing on DOE’s low dose radiation research that the three gave to a House staff member and a Senate fellow on Oct. 16, 2014. 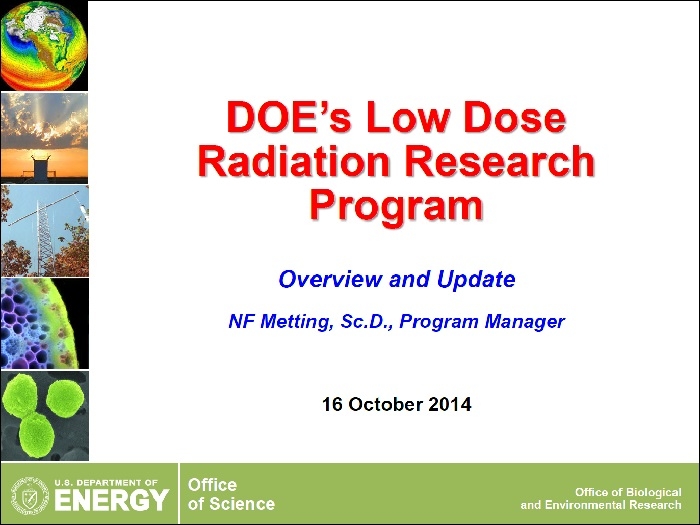 The opening slide of Metting’s presentation at the Oct. 16 briefing. Metting included her complete slide presentation with her written testimony for the oversight hearing. (Image credit – DOE)

At that time, DOE had already decided to discontinue Metting’s program in favor of funding other BER priorities. However, in response to DOE’s decision, the House was considering a bill entitled the “Low-Dose Radiation Research Act,” which overrode agency priorities by directing DOE to develop a five-year plan for research on the subject while authorizing no new funding for it.

At the hearing, Metting recalled that, prior to the briefing, it had been agreed that she would handle questions on science, while Anderson and Carruthers would handle questions relating to “budget and policy.” Then, following the briefing, Anderson and Carruthers accused her of “lobbying” on behalf of her program. Metting testified that she had had “no intention of lobbying,” but that she was soon removed from management of the program. She was then subjected to “unrelenting intimidation” before a dismissal process was initiated against her in December 2014.

After being officially released in May 2015, Metting appealed her case to the Merit Systems Protection Board, whereupon DOE agreed to reinstate her employment.

The subcommittees invited Anderson and Carruthers to testify at the hearing, but DOE did not make them available to appear.

Throughout the hearing, Republican committee members eagerly pursued the idea that Metting’s superiors manipulated the briefing in question to protect DOE's decision to discontinue Metting’s program from congressional intervention. To make this point, Loudermilk and Rep. Randy Weber (R-TX), the chair of the Energy Subcommittee, confronted the hearing’s other witness, Sharlene Weatherwax, the head of DOE’s Office of Biological and Environmental Research (BER), with email chains from her office.

In the emails, Weatherwax, Anderson, and Carruthers discussed the impact the briefing could have on whether the Senate would introduce a companion bill. In one email sent to Weatherwax on Oct. 4, 2014, Carruthers wrote, “I think this is an opportunity to subtly yet firmly let the Senate know that they don’t need to pursue a companion bill to the HSST [House Science Committee] bill.” Weatherwax replied, “Should we let Todd [Anderson] do the talking rather than Noelle [Metting]?” Carruthers confirmed, “If the goal is to squash the prospects of Senate support for the HSST, Todd may be better at staying on message.”

Pressed by Loudermilk and Weber to explain these emails, Weatherwax repeatedly stated that they concerned BER’s desire to communicate to Congress the office’s “strategic direction” and “portfolio balance.” Addressing the Oct. 4 emails, she remarked that Anderson “was the appropriate choice to convey what our program priorities are.”

Responding to a question by Loudermilk, Weatherwax declined to describe the briefing as “lobbying.” Unconvinced, Loudermilk concluded his questioning of her by stating:

I think it’s clear … that this was indeed an intention of going and persuading Congress to do something, which is a practical definition of lobbying, which Dr. Metting was fired for doing. I think there’s some hypocrisy here.

Beyond alleging hypocrisy, the Republicans also attempted to establish that BER strategically withheld information from Congress. Weber repeatedly pressed Weatherwax to admit that such activity would be “inappropriate,” but she refused to concede that BER had committed any improprieties prior to or during the briefing.

Throughout the hearing, Republican committee members connected the idea that BER controlled the information it conveyed to Congress to a larger narrative they are developing about the Obama Administration. Some of these arguments alleged the administration has created a general culture of intimidation.

Weber, notably, suggested that the DOE incident was related to a general “fanaticism” surrounding anthropogenic climate change that he argued is also driving state fraud investigations relating to ExxonMobil’s history with the subject—another matter the House Science Committee is currently addressing (see FYI 2016 #91 and #114). Loudermilk suggested that the DOE had diverted funds directly from the Low Dose Radiation Research Program into the service of President Obama’s Climate Action Plan. During questions, Weatherwax directly denied this allegation, having already described the decision as a reprioritization of BER’s biological research.

Democratic committee members who were present agreed with the Republicans that DOE had erred in its treatment of Metting. Rep. Don Beyer (D-VA), ranking member of the Oversight Subcommittee, called the department’s actions “a bit overzealous” and judged that it had “badly mishandled this case.” Moreover, he affirmed, “As a federal employee, Dr. Metting should have felt unbridled in her answers to and interactions with congressional staff.”

Nevertheless, Beyer regarded the hearing as a pretense to pursue the Republicans’ larger agenda, calling their investigation of Metting’s case “half-hearted.” He further argued that their eagerness to intervene to defend Metting against intimidation was “especially ironic” in view of the committee’s “clear intimidation of government scientists that are conducting climate change research at NOAA … because the Majority disagreed with the results of a twice peer-reviewed scientific study.” (See FYI 2015 #141 and 2016 #58.)

Such controversies may continue to divide the House Science Committee for some time. BER’s Low Dose Radiation Research Program, though, will cease operation at the end of the current fiscal year following 18 years of work. The 2014 House bill to maintain the program ultimately did pass the chamber (see FYI 2014 #157), but it was never considered by the Senate. The bill was reintroduced in 2015 and quickly passed the House, but again has proceeded no further.