The chair of the House Science Committee convened a controversial hearing this week to establish the committee’s legal authority to issue subpoenas relating to state fraud investigations of ExxonMobil. At the hearing, Republican committee members and sympathetic legal scholars outlined a broad authority based on the committee’s right to gather information relevant to its jurisdiction over federal science and technology policy.

On Sept. 14, the House Science Committee convened a hearing to explore the legal bounds of the committee’s subpoena authority. At the hearing, Rep. Lamar Smith (R-TX), the committee chairman, significantly shifted his strategy in his ongoing, controversial effort to subpoena documentation from New York Attorney General Eric Schneiderman, Massachusetts Attorney General Maura Healey, and others.

Smith’s justifications for his subpoenas have evolved

As reported in FYI #91, in the past year Schneiderman and Healey opened fraud investigations of ExxonMobil, alleging that the company misled investors and the public by sowing doubt about climate science even though, as evidenced by in-house research, its executives privately understood the risks that climate change poses to the company’s oil and gas business. In May of this year, Smith requested a broad swath of relevant documentation from Schneiderman and Healey, as well as from a number of allied state AGs and advocacy organizations. Smith justified the request by alleging that they were all part of “a coordinated attempt to deprive companies, nonprofit organizations, and scientists of their First Amendment rights and ability to fund and conduct scientific research free from intimidation and threats of prosecution.”

Smith’s requests were refused on the grounds that Congress has no authority to intervene in state law enforcement actions, that ExxonMobil’s internal scientific research is not under investigation, and that corporate fraud lies outside the Science Committee’s subject-matter jurisdiction. Replying to these refusals, Smith argued that, according to legal precedent, Congress has the authority to investigate anything that may require a “legislative solution.” In July, Smith issued subpoenas to compel compliance with his earlier request, and the recipients in turn continued to refuse compliance.

Then, in late August, Smith sent new letters to Schneiderman and to Healey, elaborating on how their investigations could tangentially affect federal R&D, creating the need for a legislative solution that the Science Committee might consider. Specifically, he argued that using the results of a company’s in-house research as evidence of corporate fraud might cause companies to reconsider partnerships between their researchers and federally funded researchers, or even cause industry to scale back on in-house R&D altogether. Such developments, Smith suggested, would compel Congress to reconfigure federal R&D to compensate. (Relevant passages from Smith’s letters are excerpted in note A at the end of this bulletin.)

At this week’s hearing, Smith made little allusion to possible violations of the First Amendment rights of ExxonMobil or its employees. Instead, his case revolved mainly around a purported desire to gather information on how the state investigations could affect federal R&D policy. As Smith said in his opening statement:

The committee is concerned that such investigations may have an adverse impact on federally-funded scientific research. If this is the case, it would be the responsibility of the committee to change existing law and possibly appropriate additional funds to even out any such imbalances caused as a result.

And the documents demanded will allow the committee to assess the breadth and depth of the AGs’ investigations and inform our understanding of whether their actions have a chilling impact on scientific research and development.

Jonathan Turley, a law professor at George Washington University, testified: “Legislative authority means nothing unless committees can understand and at times uncover insular actions by institutions or organizations that affect federal law and policy. The Supreme Court has repeatedly emphasized that.” He noted that, in the 1927 case of McGrain v. Daugherty, “The Supreme Court said it understood that information is not always volunteered, it is also not always accurate or complete, and that committees need to be able to acquire the information needed to conduct its work.”

Turley characterized as “fundamentally flawed” arguments that Smith’s subpoenas do not cross a “threshold barrier” of legitimacy thereby permitting complete noncompliance. He also expressed his hope that the state AGs would negotiate with the committee over their legitimate concerns with the scope of the subpoena. 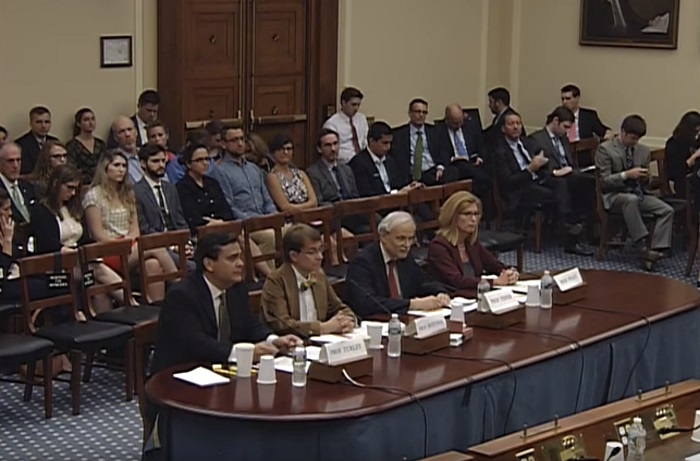 Another witness, Elizabeth Price Foley, a law professor at Florida International University, rejected wholesale the idea that the separation of federal and state authority shields the state AGs from subpoena, again citing congressional authority to gather information pertinent to legislation. She testified that, in resisting Smith’s subpoenas, the AGs are relying on a legal “anti-commandeering doctrine,” which, she argued, only prevents the federal government from forcing states to carry out federal regulatory programs. She went on:

She also argued that the states have few absolute rights to claim privilege over documents, and that disputes concerning what privileges Congress should recognize are generally resolved through negotiation—a process that the state AGs had not yet initiated.

Rounding out the case that the state investigations might create a “chilling” effect on R&D requiring legislative remedy was Ronald Rotunda, a law professor at Chapman University and a senior fellow at the Cato Institute. He argued that it was dangerous for the government to enforce a scientific orthodoxy and cited examples to claim that just such an orthodoxy had settled in around the science of anthropogenic climate change. (See note B below for more on Rotunda’s claims.) A number of Republican committee members also objected to infringements on dissenting science. There was little mention at the hearing that the Exxon research in question was actually in line with mainstream climate research.

Democratic committee members strenuously objected both to Smith’s subpoenas and to the hearing itself as falling well outside the Science Committee’s traditional focus on the substance of science and technology policy. Rep. Eddie Bernice Johnson (D-TX), the committee’s ranking member, lamented that the committee majority was breaking with historical precedent by turning a technical committee into a political instrument:

Since the Science Committee was first established 58 years ago, it has traditionally used its legitimate oversight authority and its investigative tools effectively, identifying technical challenges and helping to resolve real problems, often in a bipartisan manner. But this has changed recently. Today the majority seems to view its oversight powers as a political tool and the committee’s investigative authority as unbounded. This hearing appears to be the culmination of a politically motivated oversight agenda that has been applauded by oil, gas, and mining interests, and broadly condemned by the public, the media, and the independent scientific community around the country and around the world.

However, Republican committee members and their witnesses were less concerned with legal and congressional tradition than with building a legal case that allows them to break with current practices and standards. For instance, while Tiefer claimed that Smith’s subpoenas are unenforceable because it would involve threatening to jail the state AGs—a congressional practice from a “bygone era”—Foley did not balk at the possibility, remarking, “Early Congresses were not afraid to assert their Constitutional prerogatives, and I don’t think you should be either.”

In another exchange, Rep. Ed Perlmutter (D-CO) aggressively questioned Foley about the committee’s history of issuing subpoenas. He asked, “What if I told you that, since 1958, only one subpoena has been issued by this committee? Would that surprise you?”

Foley replied, “No, and I would not see the relevance to this particular issue.”

Perlmutter responded that the committee had only issued one subpoena prior to 2015, which had concerned the environmental disaster at Rocky Flats in Colorado. He went on: “Would it surprise you if I told you that during this session we’ve issued 24 subpoenas?”

Foley replied, “I’d say you have an active and interested chairman.”

Smith laughed and interjected, “The gentleman’s time has expired, but let me correct him: I think it’s 25, and still counting.” 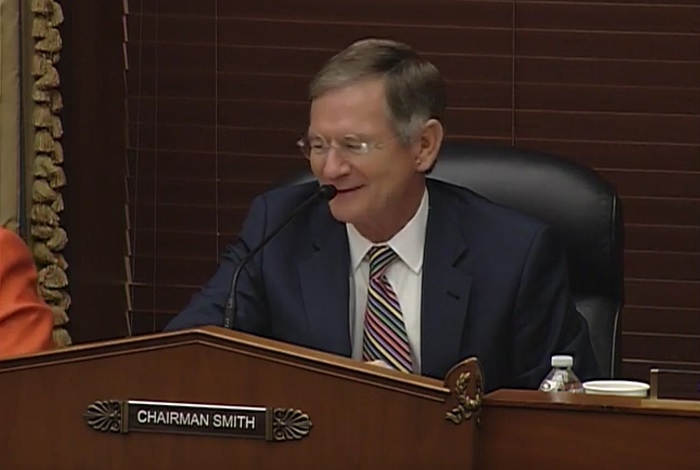 In his late-August letters to Schneiderman and Healey, Smith explained the relevance of their fraud investigations to possible legislative action that the House Science Committee would consider:

"The Committee has had a longstanding interest in grants funded by [the National Science Foundation], including those awarded to universities and private companies. Given the Committee’s jurisdiction over NSF, the Committee also has an interest in the research funded by NSF grants. Most research is funded by a combination of private and government sources. Like many other large energy companies, researchers employed by Exxon have received grant awards from federal sources. Additionally, NSF and Exxon jointly fund projects and programs such as Research Experiences in Solid Earth Science for Students, and the American Mathematical Society Task Force on Excellence. Further, Exxon partners with universities, themselves recipients of millions of dollars in federal funds, to conduct research. If, as a result of your investigation, the private sector feels pressure to make research funding decisions based in part on a desire to avoid burdensome state investigations and political or ideological coercion rather than on the basis of pure scientific merit, it is this Committee’s responsibility to identify that imbalance and correct it by directing funding elsewhere. The documents and information being sought by the Committee subpoena will help determine whether any such imbalance or chilling has occurred."

Noting that industry-funded R&D comprises over 65 percent of total R&D in the U.S., Smith’s letters also claim that investigations, such as those conducted by the state attorneys general, could, more broadly, “have a detrimental effect on the nation’s scientific enterprise”:

"If businesses believe that the research they fund can be mischaracterized for political or ideological reasons and used to build cases of fraud against the company, they will have a powerful incentive to cease funding that research and instead to direct their funds elsewhere. This, in fact, may be your goal. Similarly, if scientists believe that their industry-sponsored research, or discussions with industry about research funded by other sources, will be subpoenaed if it is in disagreement with the beliefs and preferences of state officials or advocacy groups, they will have a powerful incentive to cease conducting that research or disseminating the results of their research to all interested parties. Maybe this is your goal, too. This Committee has an interest in informing itself of these trends and effects and potentially offsetting any trends or effects that would skew research in one direction or another on the basis of non-scientific considerations like these."

One of Rotunda’s examples of the “chilling effect” that the state investigations might exacerbate concerned Harvard University geophysicist Jerry Mitrovica’s research on the sea-level effects of the rebound in elevation in Greenland following the melting of the Greenland Ice Sheet. Rotunda claimed that Mitrovica’s research shows the effect would be a lowering of sea levels, which, Rotunda further claimed, clashes uncomfortably with scientific orthodoxy causing Mitrovica to favor research on climate change in the geologic record rather than in the present. The example raised the suspicion of Rep. Bill Foster (D-IL), a professional physicist, who quizzed Rotunda on the matter.

Contacted for comment, Mitrovica himself confirmed that Rotunda’s testimony “completely misrepresents” his research, which anticipates higher than predicted sea level rises across much of the globe. Mitrovica also described Rotunda’s linking of his views on the politics of climate change research to the ExxonMobil investigations to be “about as despicable a misrepresentation of my views that I have ever read or heard.” Mitrovica noted that his complaints revolve around the actions of “climate change skeptics who respond to rigorous scientific work with dismissiveness, insults, and hostility.”