In Part 2 of its report on research regulations, a National Academies committee reiterates its call for Congress to create a Research Policy Board and urges the administration to not revise human subjects research regulations until a new national commission weighs in on the subject. Congress has begun to act on the Research Policy Board recommendation. 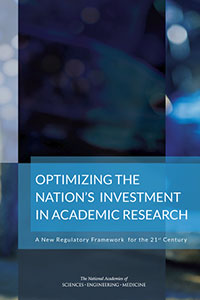 Last week, the National Academies released the second and final part of a report on reforming research regulations. The study committee released Part 1 of the report in September 2015 so that Congress could incorporate its recommendations into legislation more quickly. The primary overarching recommendation from the Part 1 report was that Congress should create a “government-enabled, private sector” Research Policy Board (RPB) to serve as a public-private forum for developing and streamlining research policies.

In Part 2, the committee weighs in on human subjects research, intellectual property/technology transfer reporting, research with select agents/toxins, and export controls. The most consequential recommendation in this new section is for the administration to withdraw its Notice of Proposed Rulemaking for revisions to the “Common Rule,” which governs research on human subjects. The committee then urges the government to create an independent national commission charged with conducting a comprehensive review of human subjects research policy.

The committee also reiterates its Part 1 recommendation that Congress create a RPB as well as a new White House position to assess research regulations on an ongoing basis to help alleviate the regulatory burdens borne by researchers:

We continue to believe that the only clear path to strengthening the U.S. research enterprise and preparing it for continued leadership in the 21st century is through the creation of a Research Policy Board as an analytical, anticipatory, and coordinating forum on research regulatory policy. We continue to believe further that the health of the academic research enterprise requires creation of a permanent position within the White House Office of Science Technology Policy established for the primary purpose of maintaining strong links to the research community, the Office of Management and Budget, federal research agencies, inspectors general, and the United States Congress.

Chapters 7 and 13 of the final report focus on ways to structure and implement this new framework. The below figure depicts the relationships between the proposed RPB and existing institutions. 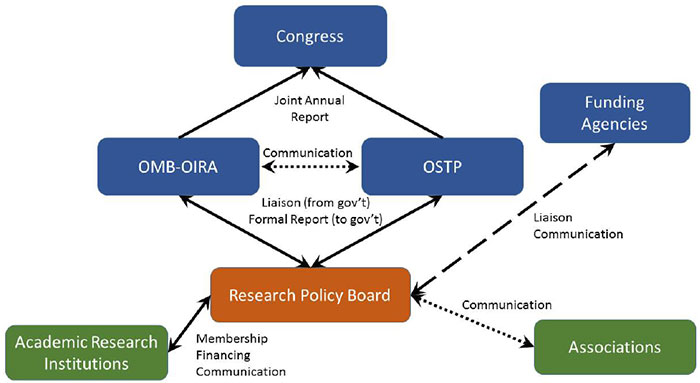 The new board would consist of members from academic research institutions and liaisons from federal agencies. The committee believes that this structure would allow the new board to craft recommendations that incorporate various stakeholder perspectives, making for regulations that are both more effective and less onerous. It would also permit evaluation of both pressing regulatory problems as well as those appearing on the horizon.

The committee recommends that the RPB be modeled after the private sector-funded, not-for-profit Financial Accounting Standards Board (FASB). The FASB is “government-enabled” in that the Securities and Exchange Commission recognizes it as the designated accounting standard setter for public companies.

Legislators have already incorporated the RPB concept into a few bipartisan bills. In particular, the “Promoting Biomedical Research and Public Health for Patients Act” (S.2742), introduced this April by Sens. Alexander, Patty Murray (D-WA), Mark Kirk (R-IL), and Elizabeth Warren (D-MA), would create an RPB as an advisory committee to OMB. The “University Regulation Streamlining and Harmonization Act” (H.R.5583), introduced last week by Reps. Dan Lipinski (D-IL), Eddie Bernice Johnson (D-TX), and Randy Hultgren (R-IL), also would establish an RPB as an OMB advisory committee. The latter bill also creates the high-level research regulation oversight position called for by the Academies committee, although within OMB’s Office of Information and Regulatory Affairs instead of OSTP.

Also of note, the “American Innovation and Competitiveness Act,” approved by the Senate Commerce Committee last week, does not create a RPB but does establish an OMB-OSTP working group charged with identifying ways to reduce administrative and regulatory burden. Some of this group’s responsibilities clearly derive from the recommendations made in the Part 1 report.

Although the roles of the RPBs created by S.2742 and H.R.5583 are both in line with that envisioned by the Academies committee, the bills’ provisions do deviate from some of the committee’s recommendations concerning the board’s structure and mechanics. The below table summarizes some of the key features of each proposal.

In particular, the RPBs created by the bills are not modeled after the FASB. They instead establish the RPBs as federal advisory committees with a number of federal agency members as opposed to mere liaisons.

Although the RPB recommendation is not being followed to the letter, the report appears to have convinced Congress that new institutional structures are needed for revising research regulations. In the press release accompanying the final report, Larry Faulkner—chair of the committee and president emeritus of the University of Texas-Austin—summarized the desired impact of the committee's recommendations: “Congress and the administration have an opportunity for a course correction that can yield significantly greater value to the public from the nation's investment in research, and we hope our recommendations will guide that effort.”