Today at a White House ceremony, President Obama awarded the Presidential Medal of Freedom to Richard Garwin, a versatile physicist and longtime science adviser to the U.S. government. 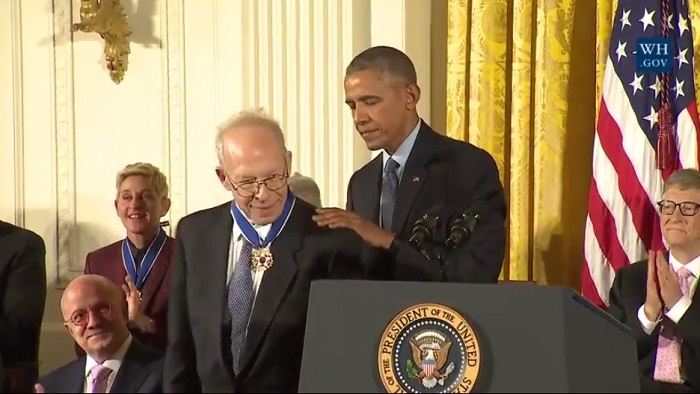 At a lighthearted White House ceremony on Nov. 22, President Barack Obama presented the Presidential Medal of Freedom to physicist and science policy adviser Richard Garwin, alongside 20 other recipients. Garwin received the honor in recognition of a long career of research, invention, and advice to policymakers. Introducing Garwin at the ceremony, Obama remarked,

Dick’s not only an architect of the atomic age. Ever since he was a Cleveland kid tinkering with his father’s movie projectors, he’s never met a problem he didn’t want to solve. Reconnaissance satellites, the MRI, GPS technology, the touchscreen all bear his fingerprints. He even patented a mussel washer for shellfish—that I haven’t used, the other stuff I have. Dick has advised nearly every president since Eisenhower, often rather bluntly. Enrico Fermi, also a pretty smart guy, is said to have called Dick the only true genius he ever met.

Garwin was born in Cleveland, Ohio, in 1928, and remained in the city to study at the Case Institute of Technology (now Case Western Reserve University), earning his bachelor’s degree in physics in 1947. He then moved to the University of Chicago, where he earned his PhD in 1949—when he was 21 years old—working under Fermi’s supervision. Garwin began an academic career in particle physics at Chicago, but moved in 1952 to IBM’s research laboratory, at that time a relatively small facility located in Manhattan.

In a 1986 oral history, Garwin recalled that, due to the encroaching bureaucratization of accelerator-based physics, his move to IBM actually afforded him more individual initiative than academic research would have. He remarked that the attitude at IBM was, “If you do world-class research, then you don’t need to worry whether what you do is of interest or even understandable to IBM.” In this environment, Garwin was able to move easily between projects, which included investigations in low-temperature and condensed matter physics and in nuclear magnetic resonance, and, later, the development of such technologies as touchscreens and laser printing.

Garwin eventually moved into research management at IBM, becoming the company’s director of applied research in 1965 and serving as director of its Thomas J. Watson Research Center from 1966 to 1967. He became an IBM fellow (an independent researcher within the company) in 1967, and remained in that position therafter. By this time, though, he had also become a preeminent figure in defense research and science advising, which increasingly dominated his activities. He first entered that world in 1950, when he started spending summers at the Los Alamos Scientific Laboratory. His first year there, he made crucial contributions to the implementation of the Teller-Ulam design for the first hydrogen bomb.

At today’s ceremony, Obama reflected that Garwin, by his own account, had gone to Los Alamos “because Chicago paid its faculty for nine months but his family ate for twelve. So, by the next summer, Dick had helped create the hydrogen bomb, and for the rest of his life he dedicated himself to reducing the threat of nuclear war.”

In 1958, Garwin began consulting for the newly established President’s Science Advisory Committee (PSAC), and served as a member of PSAC from 1962 to 1965 and again from 1969 to 1972. During Garwin’s second stint on PSAC, he famously chaired a study committee dedicated to evaluating a federal program to develop a supersonic transport (SST) aircraft. The study’s conclusions ran against President Richard Nixon’s support for the SST, and Garwin ultimately testified against the project before Congress. Congress cancelled the SST soon thereafter. The incident is remembered as an important moment in the ongoing souring of relations between Nixon and PSAC that ultimately led to PSAC’s elimination in 1973.

Garwin’s defense work followed the trajectory of a number of eminent physicists of his generation, moving from R&D into policy. Garwin served as a member of the Defense Science Board from 1966 to 1969, and in 1967 he joined JASON, a prestigious summer study group that primarily addresses technology-oriented defense questions. While Garwin extensively studied a variety of military technologies such as spy satellites and the electronic detection system deployed along the Ho Chi Minh Trail in Vietnam, it was nuclear arms policy that became the hallmark of Garwin’s later career. Garwin chaired the State Department’s Arms Control and Nonproliferation Advisory Board from 1993 to 2001.

Although Garwin officially retired in 1993, he has maintained an inexhaustable and wide-ranging interest in matters of science and technology policy even as he approaches the age of 90. During the Obama Administration, he has continued to consult with the White House Office of Science and Technology Policy and the Department of Energy. Just this month, he delivered an address in China advising against reprocessing spent fuel from light-water nuclear reactors.

Readers wishing to learn more about Garwin’s career have a wealth of resources on which to draw. The Federation of American Scientists hosts a collection of Garwin’s publications and unpublished reports and speeches online at the Garwin Archive. Garwin is also the subject of a documentary film released in 2014, as well as a book, True Genius: The Life and Work of Richard Garwin, by Joel Shurkin, which will appear next year. The AIP Niels Bohr Library and Archives hosts several oral histories with Garwin online.

About the Presidential Medal of Freedom

The Presidential Medal of Freedom is the highest honor that the United States government can confer to civilians. Recipients’ work encompasses areas as diverse as public service and activism, business and philanthropy, and entertainment, sports, and the arts. In addition to Garwin, other recipients this year from the world of science and technology are Margaret Hamilton and (posthumously) Rear Adm. Grace Hopper, both pioneering women in computer software engineering. Last year, President Obama awarded the medal to physicist and mathematician Katherine Johnson, who, like Hamilton, was integral to the history of computing at NASA in the 1960s.