Congress has reached a final agreement on a fiscal year 2017 appropriations bill that boosts funding for a few science agencies while holding others steady. The bill stands in stark contrast to a Trump administration proposal that would have imposed deep cuts on federal science to help pay for a defense and border security buildup.

Yesterday, congressional leaders announced an agreement to advance appropriations for the current fiscal year 2017, which runs through Sept. 30. The catch-all omnibus appropriations bill provides for over $1 trillion in discretionary spending across the federal government, and would fund the annual budgets for all the federal science agencies. A set of accompanying reports offers additional guidance on congressional priorities and designates funding levels for specific agency programs.

The legislation is the product of over two years of budget development, consideration, and bipartisan negotiations between the White House, House, and Senate. The House is expected to vote on the bill on Wednesday, followed by Senate action on Friday, putting it on track for enactment before Friday's midnight budget deadline.

The chart below summarizes changes in funding levels for selected science agencies: 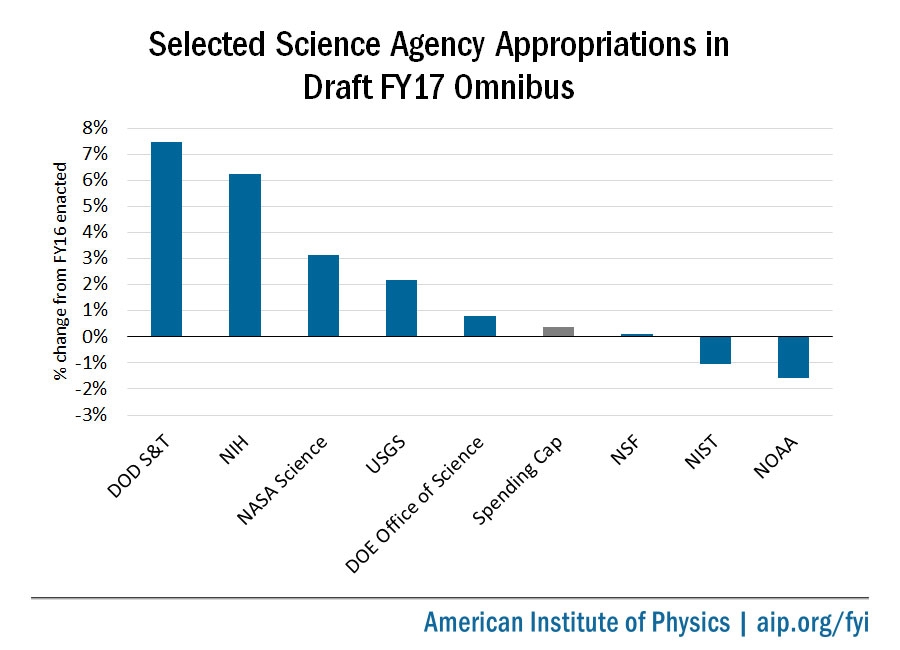 Congress will vote early this week on a fiscal year 2017 omnibus appropriations bill released by congressional leaders this morning. The legislation would lead to a range of funding outcomes for federal science agencies if enacted.

Congress largely opted to stay the course and fund the science agencies at levels within or near the ranges approved by the House and Senate appropriations subcommittees last summer. The final legislation affirms what congressional appropriators have signaled in recent weeks: that they essentially disregarded the White House’s request for immediate – and in some cases deep – spending cuts to R&D and other non-defense programs.

For example, the White House proposed to completely eliminate the Advanced Research Projects Agency–Energy that awards competitive grants for high-risk applied energy research. Congress chose to go the opposite direction and will be increasing ARPA-E’s budget by 5.2 percent with the legislation.

However, even as many science agencies received above-average support in the omnibus bill, Congress was constrained by a 2015 budget law that capped the increase in overall discretionary spending to only $3 billion, or 0.3 percent, above the fiscal year 2016 level. Not every science agency received a funding increase, and the National Oceanic and Atmospheric Administration and National Institute of Standards and Technology in particular are set to experience slight declines in spending.

All figures are in millions of nominal U.S. dollars and are rounded to the nearest million. Percentages calculated using unrounded figures.

* $40 million in funding from the Overseas Contingency Operations account excluded.

** Figures include funding from both the Operations, Research, and Facilities (ORF) account and the Procurement, Acquisition, and Construction (PAC) account.

Among the science agencies and programs, Department of Defense Science and Technology (defined as the sum of DOD’s Basic Research, Applied Research, and Advanced Technology Development accounts), the National Institutes of Health, and NOAA’s research line office will receive major increases of over 6 percent above fiscal year 2016 levels, while NASA’s Science Mission Directorate and the U.S. Geological Survey would receive more modest boosts of between 2 and 4 percent. The budgets of the Department of Energy Office of Science and the National Science Foundation would be held about flat, while the NIST would experience a 1 percent decrease.

Over the upcoming days, FYI will cover the details of the budget agreement for each of these science agencies. Primary budget documents can be accessed through the following links:

The omnibus spending agreement arrives seven months into fiscal year 2017, during which time federal agencies have been operating under considerable budget uncertainty and without the authority to start new programs. The last time Congress approved new spending levels was in December 2015.

Congressional leaders nearly completed their appropriations work last December, but the incoming Trump administration asked Congress to hold off on a final deal so it could weigh in. It then offered few specifics until March, when the administration submitted a supplementary budget proposal for fiscal year 2017 which called for immediate cuts across the non-defense discretionary budget to pay for a defense and border security boost. Congress received the request coolly.

A number of appropriators have recently expressed frustration over how the appropriations cycle dragged on with continuing resolutions since the end of last September. Senior Republican appropriator Sen. Susan Collins (R-ME) said it was “a mistake” not to finalize the fiscal year 2017 package when it was nearly ready last fall, and Senate Appropriations Committee Ranking Member Patrick Leahy (D-VT) and others have expressed similar sentiments. Senate Appropriations Chairman Thad Cochran (R-MS) put a more positive spin on the finalization of the overdue spending package, saying “I think we’re blessed with a system that works.”