According to a new report, the Department of Energy’s program to develop advanced nuclear reactors has shifted priorities too often and overspent on facility upkeep. After $2 billion in expenditures, no advanced design is ready for deployment.

This article was first published in the Politics and Policy section of Physics Today.

The Department of Energy’s Office of Nuclear Energy (NE) is unlikely to fulfill its mission of developing and demonstrating one or two advanced nuclear reactor technologies by mid-century, according to a new review of the program. In a report published in Environmental Research Letters in August, researchers at Carnegie Mellon University, the Brookings Institution, and the University of California, San Diego, found fault with, among other things, NE’s overemphasis on light-water-reactor technologies.

All current U.S. commercial reactors use ordinary, or light, water—as opposed to heavy water, which consists of deuterium and oxygen—as both the coolant and the moderator to slow neutrons from the nuclear fuel. Advanced reactors use other coolants, such as liquid sodium or helium gas. Some advanced reactors, known as fast reactors, do not employ a moderator. Although non-light-water reactors aren’t the only viable future for the nuclear industry, energy planners over the past 60 years have advocated a transition to different technologies.

For advanced reactor and advanced fuel research over the 1998 to 2015 period reviewed by the authors, NE spent $2 billion, an amount they said is insufficient to ready even one advanced reactor design for commercial deployment. The authors estimated the cost of designing and licensing an advanced reactor to be $1 billion; demonstration at full scale would cost between $4 billion and $13 billion.

The report blamed NE’s ineffectiveness on a lack of “programmatic discipline.” The program’s funding focus has shifted frequently over the 18-year span, supporting a dozen different technologies at funding levels that were “too low to be relevant to actual commercialization." Many of those efforts were discontinued during the review period.

Support for NE research activities was zeroed out in fiscal year 1998, when the office’s role was limited to facility maintenance. Since then, a combination of concern about climate change, the impending retirement of many of the nation’s commercial reactors, and the limitations of light-water-reactor technologies has helped restore NE’s research program. But only 15 percent of NE’s budget, on average, was devoted to advanced fission R&D and demonstration during the review period. Just $2 billion―only 4 percent of the total budgets of DOE’s applied energy programs―went to research on non-light-water-reactor technologies during that time.

Peter Lyons, who was DOE assistant secretary for nuclear energy from 2011 to 2015, defends the program. "I’m comfortable with what we accomplished given all the constraints we had to deal with," he says. Advancing light-water-reactor technology, the type employed in all U.S. commercial nuclear reactors, is essential to ensuring the continued viability of the nuclear industry, he adds.

The report also charged that NE has devoted an inordinate fraction of its budget—57 percent, on average—to program direction and the operation and maintenance of facilities. By comparison, DOE’s Office of Fossil Energy spent 20 percent of its budget for those purposes.

Advanced reactor and fuel test facilities at Idaho National Laboratory consume up to half of NE’s budget. Some of those facilities, the report argued, are defense related and only marginally support NE’s core mission. But Lyons says NE doesn’t fund defense programs, and he notes that the U.S. Navy pays half the cost of operating Idaho’s Advanced Test Reactor.

The largest sustained NE R&D program during the review period was the $750 million Nuclear Power 2010, which supported development of two enhanced light-water-reactor designs through licensing and siting. Funding for that program was 57 percent greater than what was devoted to the Next Generation Nuclear Plant (NGNP), NE’s largest non-light-water advanced reactor program. The NGNP has effectively been terminated due to disputes over site location and the selection of a private-sector partner. A helium gas–cooled reactor, the NGNP would have produced electricity and high-temperature heat for industrial applications. 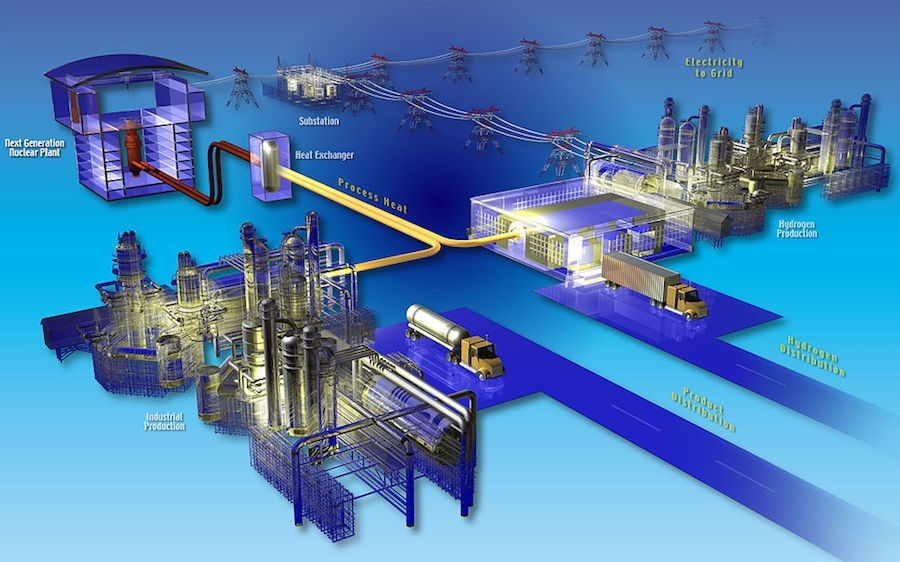 The Next Generation Nuclear Plant, which was funded by DOE’s Office of Nuclear Energy, was torpedoed by disputes over site location and private-sector partners.

Lyons points out that the NGNP was conceived at a time when natural gas prices were at twice today’s levels and the economics of nuclear power was more compelling. He says the project failed mainly due to the unwillingness of industry to share its cost.

Most of the advanced reactor designs that NE has funded couldn’t use the tristructural-isotropic (TRISO) nuclear fuels that the DOE office spent $450 million to develop during the review period, the report stated. Consisting of tiny pellets of low-enriched uranium oxide encapsulated in four layers of carbon, pyrolytic carbon, and silicon carbide, TRISO fuel is more resistant to melting or rupture than today’s fuels are. But TRISO isn’t coupled to a specific reactor R&D program, and it is unclear what role the fuel would play in a transition to advanced reactors, the report said.

Lyons counters that although TRISO fuels were developed mainly for use in gas-cooled reactors, they are also being evaluated for use in molten-salt reactors, another advanced reactor technology. Additionally, the fuel has been proposed for use in commercial light-water reactors.

Lyons points to the impending restart of the 58-year-old Transient Reactor Test Facility at Idaho National Lab as another program accomplishment and notes that fuels and materials for almost all advanced reactor types can be tested there. Resumption of operations at the facility, which has been shuttered since 1994, is expected in advance of the 2018 target date.