The current President’s Council of Advisors on Science and Technology held its final meeting on Jan. 6. On the agenda were a new report on maintaining U.S. competitiveness in the semiconductor industry, a biennial review of the National Nanotechnology Initiative, and an addendum to PCAST’s September report on forensic science. The meeting closed with reflection on the council’s eight years of work under President Obama. 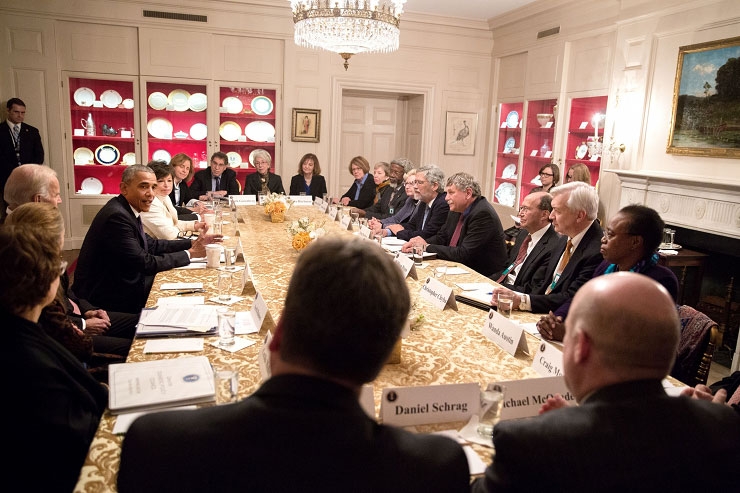 On Jan. 6, the President’s Council of Advisors on Science and Technology held its 45th and final in-person meeting under the current administration. After President George H. W. Bush established PCAST in its current form, every president to follow has reconstituted the council by executive order and appointed a new slate of members, with the president’s science advisor serving as co-chair. Its members are eminent experts from outside the federal government who are tasked with leading study groups and providing the president with independent advice.

At the Jan. 6 PCAST meeting, there were three items of normal business on the agenda: a report to the president on ensuring long-term U.S. leadership in the semiconductor industry, PCAST’s sixth biennial review of the National Nanotechnology Initiative (NNI), and an update on PCAST’s investigation of forensic science.

The semiconductor report was assembled by a working group co-chaired by John Holdren, the president’s science advisor, and Paul Otellini, the former president and CEO of Intel. The report focuses primarily on the economics of the industry and the challenge presented by burgeoning Chinese competition. It offers the core finding that the proper U.S. response is to increase the pace of innovation at the frontiers of the industry, and it recommends a series of general “moonshot” innovation goals that the government can set to help focus and organize activities in academia, industry, and government laboratories. As examples of possible moonshots, the report suggests a zero day bio-threat detection network; a low-power, 1-km-resolution global weather forecasting architecture; and commercial quantum computing capable of handling computational chemistry and materials science problems.

From the standpoint of science and technology policy, the report is notable for its inclusion of an appendix defining the increasingly prevalent buzzword “moonshot” as a term of policymaking art. According to the report, a moonshot is an “application-driven approach to fostering innovation,” akin to the engineering “grand challenges” that have proliferated in recent years. In the context of semiconductor technology, each moonshot the report proposes “vertically integrates technologies across the entire compute stack, from the top-level application down to the component technologies, in order to sufficiently nurture transformative ideas and create a more sustainable competitive advantage for the United States.”

Following discussion of the semiconductor report, PCAST members Michael McQuade and Mark Gorenberg discussed the forthcoming PCAST NNI review, which will complement a National Academies triennial review and the updated NNI strategic plan, both released in fall 2016 (see FYIs 2016 #116 and #148). Like the other two documents, the PCAST review suggests no major shift in policy for NNI. It does, though, recommend that two new nanotechnology-inspired grand challenges be announced in the coming two years to supplement the grand challenge for future computing announced in October 2015.

Reflecting on the history of NNI, Gorenberg remarked that the previous PCAST review, completed in 2014, represented a turning point:

By 2014 many people here in the government and outside wondered if the NNI had run its course, and we looked at that seriously. ... But we also looked at it another way, which is that nanotechnology is really just in its very early innings. It is not a specific technology. It’s not tied to any particular industry or discipline or any agency silo. It’s clearly a revolution in how we work with atoms. So, we’re at those very early innings and we saw a great opportunity to move from coordination to leadership. And that leadership took on this concept of the grand challenges. … The NNI probably is more important now because of that than it has been in its last five cycles.

Notably, the updated strategic plan also regards nanotechnology as at a point of emergence from an R&D-centered enterprise into full integration with industry. Alongside the semiconductor report, the review highlights the current PCAST’s interest in developing innovation policy that can assist multifaceted high-tech industries that are maturing or well established.

Finally, Eric Lander, PCAST co-chair and the chair of its forensic science working group, discussed a forthcoming addendum to the PCAST report on forensic science released in September. The report emphasized the need for firmer empirical evidence of the validity of many forensic practices. A recent opinion piece in the Washington Post noted that the report met intense resistance, including from the Department of Justice. The new addendum will respond to some of this criticism.

Meeting ends with reflection on eight years of work

The meeting concluded with a roundtable discussion, led by Lander, highlighting some of the work the current incarnation of PCAST has done over the past eight years. For instance, Gorenberg expressed his surprise and satisfaction that a long and detailed 2012 report on the allocation of the government-held wireless electromagnetic spectrum had led to major policy action. Lander highlighted a short but well received report on hearing aids that spotlighted regulatory barriers to the innovation needed to make the devices better and less expensive. Maxine Savitz, PCAST vice chair, recounted the council’s work to guide government policy on advanced manufacturing. Physicist Jim Gates lauded the influence of the council’s four reports on STEM education, and recognized the importance of input received from teachers.

All but the most recent PCAST reports are currently available on the council’s website.

Closing the meeting, Holdren thanked the council members and the staff who supported them, and acknowledged the importance of Obama’s personal engagement with their work, remarking:

I sometimes inappropriately get credit for having somehow turned him into a geek, a techno-nerd. He was one when he came. He had a deep understanding when he arrived at the presidency of how and why science, technology, and innovation matter. … I have said publicly on previous occasions, I’ll say again, I think President Obama is the most science savvy president since Thomas Jefferson, with the qualifier that there’s a lot more science to be savvy about today than there was when Thomas Jefferson was the president, and that has been, I think, to the great advantage of our nation.

With the adjournment of the meeting, the current PCAST concluded its service. President-elect Trump has not yet announced plans to reconstitute PCAST. As points of comparison, Obama convened his PCAST in April 2009, while President George W. Bush announced his PCAST in December 2001.