As the House advances a budget that cuts non-defense spending while boosting defense spending over the next decade, a group of coalitions representing scientific organizations and universities is urging Congress to lift both defense and non-defense budget caps that are constraining federal spending on science.

As House and Senate appropriators continue to develop the legislation that will fund the federal science agencies in fiscal year 2018, their efforts are constrained by a budget law that sets annual caps on federal spending. A group of science and university advocacy coalitions wrote to Congress this week urging them to negotiate a bipartisan agreement to raise these caps so additional funds can be made available for federal research programs.

Appropriators have been working this year without the benefit of a budget resolution that the House and Senate typically pass in the spring to establish overarching spending allocations for defense and non-defense accounts. The House Budget Committee finally passed its fiscal year 2018 resolution yesterday, but it is a partisan measure, and it is unclear whether it can garner the support needed for passage.

These and other budgetary challenges are introducing an element of uncertainty as the fiscal year 2018 appropriations process moves from the development of spending bills toward crafting a final appropriations package that Congress can pass. Depending on how these challenges are ultimately resolved, spending on science programs could end up significantly higher or lower than current proposals.

Last night, the House Budget Committee approved its fiscal year 2018 budget blueprint by a vote of 24 to 14, just one day after Committee Chair Diane Black (R-TN) unveiled it at a press conference. The blueprint, which currently has no public support from Democrats, would allocate overall spending amounts for the upcoming fiscal year 2018, set annual spending targets over the next decade, and propose a number of cost-saving measures, including targeted reorganizations within the federal science enterprise.

At the press conference, Black said a primary goal of the budget is to reduce mandatory spending — a category encompassing entitlement programs such as Social Security, Medicare, and veteran’s and federal employee retirement benefits — in order to eliminate the federal deficit within a decade. “This is a plan to balance the budget. It’s for economic growth. It secures our national defense. It returns power to the states. It holds Washington accountable,” she said.

The House Budget Committee’s ranking Democrat, Rep. John Yarmuth (D-KY), had a different assessment of the budget blueprint, saying “It is an incredibly cold document that willfully ignores the needs and priorities of the American people."

Rep. John Culberson (R-TX), chair of the House Commerce, Justice, and Science Appropriations Subcommittee, has said that reducing mandatory spending is key to freeing up dollars for the science agencies. At a July 13 appropriations meeting, Culberson noted his committee’s spending bill — which funds NASA, the National Science Foundation, the National Institute of Standards and Technology, and the National Oceanic and Atmospheric Administration — had received $2.6 billion less in fiscal year 2018 than in fiscal year 2017. He pinned the problem on fiscal crowding, urging,

We simply have got to address the looming problems that face Social Security and Medicare to … balance our budget for the long-term and enable us to have the funds that are necessary to really ensure the FBI, federal law enforcement, scientific and space exploration have the resources they need. 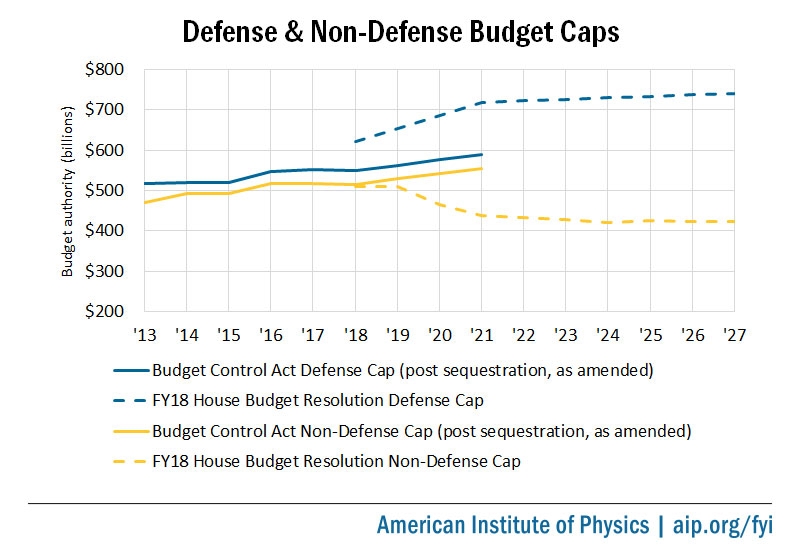 Such growth in defense spending would permit increased budgets for Department of Defense S&T and the National Nuclear Security Administration, which oversees three national laboratories. However, the reduction in non-defense spending would squeeze the budget of civilian science agencies such as the Department of Energy Office of Science, NASA, National Science Foundation, and National Institutes of Health.

The House budget blueprint also includes several recommendations for streamlining that would impact the federal science enterprise, including incorporating NIST into NSF; moving NOAA into the Department of the Interior; and “reducing spending for numerous climate-change-related activities and research,” specifically those at NOAA and the Environmental Protection Agency.

Within DOE, the blueprint would support maintaining funding levels for basic research while reducing support for “commercial” R&D to “allow the DOE to zero in on cutting-edge discoveries in the physical sciences that may lead to major improvements in society, such as with the Internet, while leaving the application, commercialization, and deployment of new technologies to the private sector.”

These proposals hew closely to those included in a budget resolution the House Budget Committee approved last year.

Importantly, the House budget blueprint would violate established defense spending caps, set in statute by the Budget Control Act (BCA) through fiscal year 2021. For fiscal year 2018, it would set base defense spending at $73 billion above the cap, while non-defense spending would remain under the cap, dropping to $5 billion beneath it. The budget would also allocate tens of billions of defense dollars through the Overseas Contingency Operations account, a supplemental war funding account which is not subject to budget caps.

Any spending increases above current caps would not be appropriated, because the BCA triggers automatic, across-the-board cuts at any amount in excess of defense and non-defense caps. Boosting either account beyond the caps would require amending current budget law, which, so long as the filibuster remains in place, would only be possible with support from Senate Democrats. And in the past Democrats have unified in insisting that increases in defense spending be matched by comparable increases in non-defense spending.

In their letter this week to congressional leadership and appropriators, 16 science advocacy coalitions jointly urged Congress to take a different path by working in a bipartisan fashion to raise both caps, pointing out it has already been done twice in recent years:

Past bipartisan and bicameral efforts, such as the Bipartisan Budget Act of 2015 that raised the Budget Control Act (BCA) caps for fiscal years 2016 and 2017 demonstrated your commitment to the nation’s scientific and innovation enterprise. This two-year reprieve from BCA spending caps resulted in steady and growing federal investments in many areas of scientific research. … We call on you to reaffirm your commitment to scientific research by crafting a budget agreement that raises the spending caps for defense and non-defense discretionary programs.

Skepticism among GOP on prospects for passage

Now that the resolution has received the approval of the House Budget Committee, the measure could go to the House floor as early as next week. What will happen on the House floor is still uncertain. Aside from Democratic opposition, Republicans themselves remain divided over the size of spending cuts in the resolution, especially those to entitlement programs.

Rep. Charlie Dent (R-PA), co-chairman of the moderate Tuesday Group, cautioned “We are writing the appropriations bill with numbers that are not real,” calling topline figures for defense and non-defense discretionary spending “fake” and produced by a “fake process.” Dent and 19 other Tuesday Group members sent a letter to Speaker of the House Paul Ryan on June 30, saying they would be “reticent” to support the budget resolution without a bipartisan agreement with the Senate.

Mark Meadows (R-NC), chairman of the conservative House Freedom Caucus, which was hoping for deeper cuts, said that the plan may lack enough votes to pass on the House floor, adding that more work is yet to be done: “That means more negotiations have to happen in order to get a budget.”